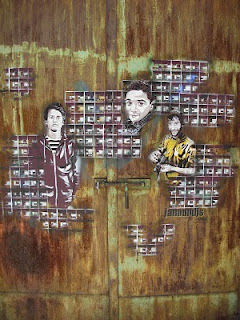 Yesterday was busy! After a long lunch and a rest, we returned to Tabacalera, the new CSA in Madrid. (That is Centro Sociale Auto-gestionada, or self-organized social center.) A party climaxed the events of the week long fiesta for three years of “red”-sistance thrown by the CSOA Patio Maravillas (that's “O” for okupa, or occupied, a squat). Thanks to an artist who has been working with the group since the beginning, we quickly met half a dozen of the most involved people in the space. My Spanish is growing, leaning on guesses at the infinitive forms of many Latin-derived English words. Also I have learned a sort of Spanish word order from my lover, now much damaging my English prose style I am sure. While I can somewhat speak, I cannot well understand what people say to me...

Before our friends arrived, it was frustrating. We were to meet Ely at the cute, brightly-painted hut which is the bicycle workshop in the patio behind the building, but the way out back was blocked by a tape and a guardian. We could see people outside sitting there, but were not allowed to reach them. Also I needed water, but no one was serving at the bar. In frustration, I waited on the street for Ely.

Later my problems were solved in a very revealing way. The access to the patio is through a wooden spiral staircase, really a hole in the floor behind a cabinet, in a room that houses the historical relics of the old Tabacalera factory. “No tocar los cosas historicos,” (?) the sign reads – don't touch the historical relics. People had been vague about directions to us. It's kind of an open secret: Down the rabbit hole, and you are in the patio. When our friends arrived, we went to the bar, where there was by now a good press of people. I saw the stacks of plastic cups behind the servers, and behind the bar a large kitchen. I simply trotted in, grabbed a cup, and poured myself a cup of water at the sink. A sign behind the bar says something like, “This is not a bar. This is a place to serve yourself.” Not true during a big public event, but the principle holds true. Always, if you act, like you know what you are doing – yes. But the place really could use a drinking fountain!

At length Ely arrived, and we chatted on the street. She said that a number of people who had been active in the CSOA Laboratorio – 1, 2 and 3* – were central in the assembly at Tabacalera. They had long wanted a neighborhood center in Lavapies, the multi-cultural district where many of them lived. The giant building had been empty for ten years since the privatization of the cigarette-making business. Now at last, after long lobbying with the city government, they finally have it.

When Montfrague arrived with Manuel our tour began. First I met Anna, who did not have much English, so I tried to talk to her about the situation in the U.S., in NYC with ABC No Rio. She asked if it had been a squat. No, but founded in an occupation, and later, during the period of most contest with the city, in the 1990s when the Lower East Side squatter movement was most strong, the whole building of ABC was actually squatted. Today the director is a squatter, living in a now-legalized building wiith a very low rent so he can afford to work at ABC for very little money.

Anna was in the cafe, where a Czech actress talked with us about her job of doing theater for free. Tabacalera is dedicated to free culture as a foundational principle. The actress was a curious person, smiling, very sweet. At one moment I saw that she was standing with one foot in a large green plastic tub...

After this we descended into the basement, where years ago tobacco leaves were stored. There I was introduced to Ciril, who was central to the Taller Urbana, a group of street artists working collectively. They had a big table, with many people around talking, drawing, drinking – and in the first bay of the basement warehouse a sort of ad hoc exhibition area for the products emerging from the Taller. Ciril it turns out worked at Tacheles, the famous Berlin squat and art center, in the 1990s, from '92 to '96. These were during the glory days after die Wende of '89, when the wall came down and many vacant properties near it in the former city center were up for grabs. The Berlin squatter movement seized the day.

Ciril thought the scene in Spain was sluggish, so he went to Berlin and stayed for four years. Now, after the Barcelona squat scene has been more or less crushed, Madrid is where it is at. Ciril asked me to talk to the Taller next week, and I look forward to return and discuss the House Magic project. The street art inside the Patio Maravillas last year before their eviction was extraordinary. The winding stairs of the building were a blaze of colorful forms. Although the installation was a chaotic free-for-all, and many people didn't like that, the result was a striking spectacle. Something like that, if it could be put together with the coherence of the 2640 and Justseeds installations I have seen in the U.S., would be a wonderful show which could travel to cities all over.

Back upstairs, we stood beside the stage as a punk ska band blew it out to the crowd. Too loud for my old ears!, yes, but a crowd of boys were moshing like monkeys, and everyone seemed to dig it. The band – I didn't get their name – had horns, and one musicians used a penny-whistle and then a bagpipe. I couldn't well hear any of the “oi!”-ish chants, but if they didn't have to do with Spain's soccer victory, I'd be surprised.

At lunch I learned the bizarre story of the oracular octopus who has infallibly picked the world cup winner for many years by fishing food from a bowl marked with different flags. The creature is German, actually. I hope its disappointed keepers didn't eat it! All this was revealed over a delicious plate of the animal served with potatoes. I suggested that Spain should not eat “pulpo” for a while to honor the oracle.

A couple of the Patio Maravillas crew showed up beside the stage, bouncing to the music. Of course it was too loud to talk. Later in the hallway I met Luis, who has good English, and I learned more. I asked about the “legitimation crisis.” Tabaclera is a CSA, not a CSOA or occupied space, but in residence legitimately. The graffiti on the banner outside – “vendidas!” (sell out) – reflecting the fear that many squatters have that a legitimated space will mean that the other okupas will more easily become targets of the state. Luis said that remained to be seen, but that many of the other okupas were already seeing the usefulness that Tabacalera could have to the movement. The fact that the Patio Maravillas party was drawing a crowd of many hundreds shelling out 3 euros each could mean a lot for that place. I recall the confidence Pierpaolo Mudu expressed in London about raising money for a publication through a concert at the massive Roman CSOA Forte Pretestino. “Once with Manu Chao, and we have it.” Although free culture and “copyleft” are ideals in practice, there is disagreement about what role money should play in the new CSA. People are seeing the possibilities.

So the criticism being expressed by the graffiti outside may not end up to be too toxic. The movement in Madrid, Luis told me, is more open and less fractionated than it is in Barcelona. This cooperation among many people of many ages and points of view has made something like the Tabacalera possible.

Of course, when money appears, many open hands appear also. Manuel told me that the state has been making noises about the group in Tabacalera paying rent. I suggested that if they were to budget their project, with the “in kind” work, the “sweat equity” that everyone is providing cleaning, repairing and administering the space, the calculation should end up with the state owing them for providing such an extraordinary service on such a scale!

Just as Leoncavallo in [Milan] began in 1979 to provide volunteer social service, so the Tabacalera CSA stands ready to become a primary artist-run cultural center for a city which has never had one. Right now, in the heyday of its beginnings, the place is as Manuel said, “boiling.” How in the long run it will be run can be open to question. There are already many disagreements to be worked out in assembly, frictions between the culture of activists and artists. Manuel and I had an obscure argument about Tabacalera administration. I think he saw it as a kind of collection of groups, like religious cults, each revolving around a guru. I maintained that, with its anarcho-syndicalist tradition, Spain is in the best position to realize anarchism in its ideal, as “the highest form of order.” (Although their students now may not really get it, Stefano Harney, Matteo Pasquinelli, Stevphen Shukaitis and others teaching “critical management studies” in the London business schools are rolling out the really new ways of doing sustainable democratically organized economic activity.)

Manuel spoke also of the Medialab Prado. This e-art workshop and learning center lies behind the Caixa Forum museum in the city center, around the corner from what should be Henry Kissinger's favorite hotel should he dare to come to Madrid. (I guess this by the cloud of black cars and body guards all around out front.) Medialab Prado is a small but important state-funded center of special culture that represents the cutting edge of technological development in the kind of culture industry every city dreams of nurturing. The Medialab had an organizational meeting this week to discuss making some kind of arrangement with Tabacalera. What is the result I don't know yet.

As the evening continued my magic language pill was wearing off. I met two members of a “conceptual art group” called Tauromachia whose project I could not understand at all, only that it will be big. They were working on set-ups in the large sculpture studio we visited earlier. One of these artists told me he was working with a dancer who had choreographed movements in which she was at once bull and matador. “Ah,” I said, “the hamburger that eats itself!” I'm afraid that was a little flip for the week in which the bulls are running the streets in Pamplona. The Spanish relation to food is a lot more mystical than in the U.S.

All in all, though, this was a very big evening for me. Many of the initial goals of the House Magic project seem now somehow to be within reach – at last! A genuine relation with a CSA, deeply rooted in the squatting movement, can help move this information to the U.S. in its pure and unmediated form. We shall see. But the prospects are good.

As I move on to Hamburg, I have finally and unexpectedly, come upon the kind of public private cultural development project I had been looking for in Madrid. The Tabacalera it seems to me is real anarchist urban development, a clear instance of “the city from below.”

*We showed the video “Laboratorio 3, Ocupando el Vacio” at the House Magic show at ABC No Rio. I recommend it. The trailer is on YouTube.
Posted by Alan W. Moore at 2:22 AM