Broken Promises and a Thesis Statement

Back for a time in the States, I'm finding that “Municipalismo,” city rights and strategies to resist the absolute majority of a revanchist federal government and many state legislatures – is on many folks' minds. I've been invited to join a round-table on municipalism in Minneapolis at the end of March.
From this vantage, my blog, I'm all too aware of my broken promises of months gone by: January 30 “Next: The New Municipalism: How Cities Can Advance Without the Federal Government”! Yeah, right. With the doctrine of federal and state supremacy firmly entrenched in U.S. constitutional law, this would prove a hard project. But “advancing” can be multiply construed... Then this one, of February 15: “Next: Research and Development of Contemporary Municipalism”! Well, that post was to concern the institutional and autonomous projects that support progressive cities, a subject basically too vast for me to get it under control. (I will continue to try.) 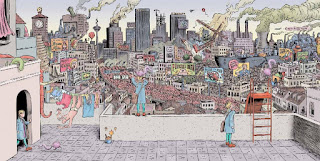 Illustration by the amazing Miguel Brieva
So now, awash in texts read and undigested, I wonder what can I contribute to the upcoming roundtable event? Some reflections on municipalism in Spain, in which I have been a bystander, basically a 'literature review' of recently posted online texts. What is more in my line is an insistence on the urgent necessity of building autonomous “monster institutions” of counter-power. Those doggedly constructed in Europe over decades of struggle are in the forefront of contest against neo-liberal austerity. While they have not been embraced by political parties, their ideas and personnel have gradually seeped into many governmental institutions there, and in this way they have exerted their influence. What is new and striking about the Spanish municipalismo movement is that many from the counter-power popular institutions have entered directly into government. They are just in time to catch the technological wave of new e-tools for participatory decision-making, and to advocate not only for strengthening the social welfare safety net rotted out by austerity, but to propose basic income as a bulwark against the oncoming robotic and AI-driven waves of joblessness.
The USA is terribly far behind in this. Our politics have become entirely a spectator sport, as profitable for the circus-masters as pro football, and equally the realm of titans and superstars whose glitter and rage captivate millions.
It is exactly this Jeffersonian “Right of the People to alter” an improperly exercised power, derived from “the consent of the governed”* which is called into play – continually, through civil disobediences, and more, a kind of civil re-allegiance.
No more than this: Liberal institutions must aid and abet the construction of an effective popular, progressive, and autonomous counter-power.
The key question we face now is can the civic mores and institutions of the U.S.A. contain an incipient fascist federal executive backed by an unscrupulous mendacious political party with an absolute majority in the congress? These now include a mass market profit-based telematic media in which “news” is a source of profit, that is to say a conscience-less industry void of civic purpose or sense of obligation... although they are getting better at pretending to it.
The answer is at this point must be “just barely” – that is to say, no. The only force that can countervail such lethal legal authority is an autonomous popular counter-power. The grounds for its construction in this country are lacking, as social movements are habitually riven with dissension and particularlism. Therefore it is the institutions of the U.S. themselves which must undertake to construct this autonomous popular power. 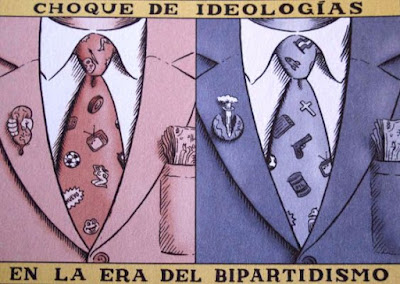 Miguel Brieva
Posted by Alan W. Moore at 11:51 AM No comments: