I haven't blogged here for quite some time. I'm writing a book -- "Art + Squat = X," although it won't be called that. And I'm not a split focus person... Anyhow, I wrote this essay for a recent publication from the indispensable Journal of Aesthetics and Protest called "A Museum of Reclaimed Urban Space Opening—a moment’s Catalog; December 8, 2012." It's edited by Benjamin Heim Shepard. (His blog is also pretty great, if you wanna know what's up with a bicycle-riding street-pranking scholar adventurer.) You can order the book -- which is a kind of deluxe thing -- at Hannah Dobbz' new "SQ distro" distribution website for squat-related literature:
I just finished a chapter on Occupy Wall Street (whew! functionally impossible), and came to this part of the book, so -- a share. 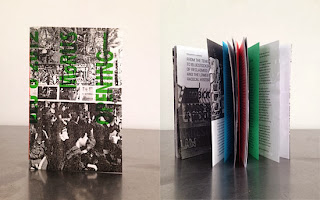 The opening of the MoRUS museum was an unexpected surprise. I don't any longer live in the city, so to arrive on the big day and see a crowd of young people behind the desk as well as the usual crowd of ne'r-do-wells, miscreants,* and Don Quixotes drifting around and parking their widening butts on the freshly painted benches was delightful. What are all these NYU students doing here? Could it be that the singular squatter subculture of New York City was in some way reproducing?
Why are they here? What draws these young people to work on this project of material remembrance of social movement activism that helped some people get cheap apartments and a community get a precious garland of sometimes-open green spaces? (Though birds can always use them.)
I didn't ask. I was too busy greeting old friends and comrades. Even those who never liked me seemed to smile and nod, so happy were we all that MoRUS had actually come to pass.
The NYC squatters' movement is a strongly cohesive tribal subculture, an “elective family” of sorts. They won significant victories – territory for homes and gardens, and a recognition of their social and cultural significance. All of this was carefully and painstakingly constructed over many years of grinding construction work, living amidst squalor, negotiating conflict, battling police, gentrifying politicians, and unsympathetic conniving neighbors. The squats and gardens were constructed in resistance.
Their movement was also built through art – that is, continuously fronted, explained, and outwardly faced with representations. Music, stories, drawings and cartoons, fashion, inventive public actions, all played their role in making the Lower East Side squatter a familiar figure of the '90s, and a kind of urban legend.
The founding of the MoRUS signals a historicizing self-reflective bent that has taken hold of some among this tribe. The Squatter Rights and Times Up bicycle activist archives that were put together for the Tamiment Library several years ago were an early sign of this, preserving important political and subcultural movement documents for study. But the MoRUS is much more ambitious. It is also held together by young people, volunteers who sit the desk and run the errands. So there must be something in it for them, some information and experience they need to negotiate their lives in these times.
Squatting has recently been made illegal in two of the countries which fed the New York movement, England and Holland. Open public social occupations still happen, but they are a lot harder now. They are evicted sooner and with more force. The English movement continues with bravura short-term projects and the support of leading intellectuals. The Dutch put their faith in ameliorative quasi-governmental compromises and mediating agencies.
In the USA it seems, people simply accept that the rich run everything, and if you aren't making a profitable business you aren't doing anything worth bothering about. As the late mayor Ed Koch once said, if you can't afford NYC, “M-o-o-o-o-ve!” This is no way to live, especially not if you are an artist whose work, like most of us, does not have a high economic value. So how do you live? How do you work?
To get the provision they need for no-money cultural and political work, in New York and other U.S. cities, people just have to take it – take it from the vast storehouse of lands and buildings “banked” by owners with no use for them. Popular appropriation of the rotting use value of these places will be evicted and resisted. But squatters need to be persistent and undeterred if they are to get past the dogs guarding the empty mangers.
Although it may be illegal, squatting is not a crime, and squatters aren't crooks. They are workers doing necessary urban development using their labor, not capital. Every occupation is radically contingent, and circumstances vary widely. Every encounter related to an occupation project – every neighbor, every cop, every landlord, every judge – is a negotiation. Evey squat development project needs to be handled carefully, conscientiously, and networked with others. Every squat is, by its very existence, a work of public education in social possibilities.
Many squat projects have been institutionalized as part of the city's permanent cultural and social facilities. The MoRUS is a reminder that these kinds of actions are possible, that they are necessary, and that they can yield good results and broad social benefit.
It is important to bear in mind as well that the direct action New York City that MoRUS represents is only part of a global picture of people taking action to fulfill their legitimate needs for urban space. The struggles of many of these movmeents are chronicled on Squat.net (recently redesigned), as they have been for decades. Their intellectual and mainstream advocates network through initiatives like Right to the City.
As the MoRUS develops, it wiill be exciting to see if they can reach out and embrace the international squatting and occupation projects which have long been blacked out of the U.S. media, and present the ture lineaments of the global occupation movement.
Clearly, the MoRUS is going to be a teaching museum...
* Affectionate slander: but truer than I knew, “Middle English miscreaunt, from Anglo-French mescreant, present participle of mescreire to disbelieve, from mes- + creire to believe, from Latin credere...” (merriam-webster.com). These squatter people believed in a way outside of capitalist relations.
bio:
Alan W. Moore is an independent researcher and teacher, and a co-founder of ABC No Rio. He edits the “House Magic” zine of occupation culture, and is currently writing a book on art and squatting. He lives in Madrid.