What do I know?, I'm sitting in New York. But Thursday is the Radical Urbanism conference at the Grad Center here, and Jordan Zinovich will talk about Christiania there -- and I see that Interactivist.net bears this interesting post about the "Climate Bottom," a summit, or rather anti-summit taking place simultaneous with the muck-a-mucks' one in Copenhagen. Christiania, despite their troubles, is a place unafraid to host activists during the global summits of the rulers. As one of the greenest and most sustainable places on the planet since the 1970s -- (a friend of mine insisted that it wasn't "hypocrisy" to repress them during the summit, only "a paradox") -- this community is a beacon to the world... our world... the world of the future. Make noise -- be seen -- tell all the party people what you mean! 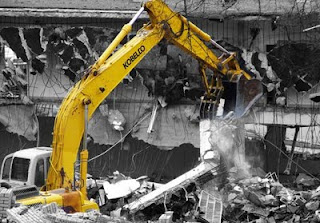 Back in NYC after my little jaunt to Madrid. Before I left, Jay entertained me at his squat in Tetuán. It is in a very old building, of which there are a number abandoned in advance of new construction of apartment houses. Now, with the crisis, the construction is stalled, so some of the deserted houses are being used. We also visited a new social center in the district, across from a mosque. It is run, Jay said, by Zapatistists, and is a local social center as opposed to say, Patio Maravillas or Malaya (closed), which are open SCs located in the central city. The local SCs are just that -- dedicated to the concerns of the community in which they are located. The open ones are more public, and, like Patio, may be more culturally oriented. Jay is a member of the media group SinAntena, which made a documentary "Lavapiés: 18 años de okupación." [URL below] I dropped back into NYC just in time to catch the very end of the An Architektur group's sympsium, "Ten Days for Oppositional Architecture: Towards Post-Capitalist Spaces," in a storefront in Dumbo, Brooklyn. This was an ambitious event, produced by a Berlin collective which publishes a journal of the same name. It was part of a performance art festival called Performa, and was held in a space donated by a real estate group (naturally). (Further evidence, of course, that Stefan Dillemuth's prediction of "corporate rococo" is coming true; "post-capitalist" in this instance having perhaps another stopping point than socialism!) A number of the presentations are on their website in audio form, including the sessions on decommodification of housing, the prospects of planning, and the commons: taking versus granting rights. I made it to the wrapping up session, with invited guest Damon Rich. Rich works as a planner in Newark, and is a founder of CUP (Center for Urban Pedagogy). This group is committed to education, and to "making policy public." On that website, they have posted a PDF of "Predatory Equity: The Survival Guide." It describes the cycle of speculation in property that destroys low and middle income housing in the USA. This is the cycle, said planner Peter Marcuse in a session last night, that must end. Why is land a commodity?, he asks. It's a natural resource. Housing tends to be a monopoly, with a largely fixed supply. A rise in rents does not lead to an increase of units, just more profits for the owners. In this panel, sponsored by the CUNY Center for Place, Culture and Politics (run by Neil Smith & David Harvey), Rob Robinson of Picture the Homeless and Max Rameau of Take Back the Land called for a nationwide land and housing direct action initiative, to reclaim TARP properties (that is the U.S. "Troubled Asset Relief Program," under which defaulted home mortgages were bought by the government.)
These houses are held off the market so that the price of the remaining supply may rise. To assert the moral right of persons to be housed -- to argue that "housing is a human right" -- is an argument that these activists feel can now be made. PtH has been meeting with the visiting United Nations special rapporteur on adequate housing.
This is clearly important stuff. And a nationwide campaign is needed before the government decides to bulldoze
the nation's cities where it is possible for poor folk to find housing. PtH organizer Frank brought this up rather quickly, but it's a bombshell. As the UK Telegraph reported in June, "“Dozens of US cities may have entire neighbourhoods bulldozed as part of drastic `shrink to survive' proposals being considered by the Obama administration to tackle economic decline." This story is being followed by rightwing blogs. There is a restatement on a site called "Inhabitat" with the motto "design will save the world." They seem pleased that the plan would be "big news for environmentalists," since the poor districts would be replaced by parks and forests. Again, Werner Von Delmont would approve. Fox hunting anyone?
While I have been dabbling in the discourse of planning and finance as it has been purveyed in NYC lectures and symposia on the crisis this year, I continue to investigate the social center movement, and collective forms of disobedient direct action in the cities of the world. This Sunday (12-6-09) I will lead a second conversation about European squatted social centers as part of the Public School for Architecture produced by the Common Room group. The talk will take place at 3pm in Brownie's Cafe in the basement of Avery Hall (the Graduate School of Architecture building) on the Columbia University campus. The second issue of the catalogue of the “House Magic” project will be produced this month. Texts and images are invited by the closing date of December 15th of this year. Please send to awm13579[at]gmail.com, and include in the subject line: “HM2”.

Photo by Brett Weinstein from inhabitat.com
Posted by Alan W. Moore at 2:50 PM No comments: