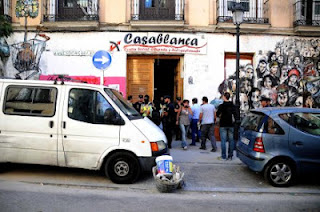 The social center Casablanca was evicted this week from an abandoned luxury apartment building in central Madrid. It is only the latest squat to be cleared in Madrid, as the rightwing government has gone on an eviction spree to wipe out the logistical organizing bases of the 15M movement throughout the city.
Organize for Occupation in New York has called for a peaceful protest at the Spanish Consulate on Tuesday, September 25th at Noon, 150 East 58th St (Between Third and Lexington Avenues).