Clochards – Rough Sleepers in “The Other Paris”

Today I am stealing from Luc Sante's book “The Other Paris” (Farrar, Straus and Giroux, 2015). Sante includes a note on the homeless, “rough sleepers” and squatters of that city in the 19th and early 20th century. Here is an extensive quote from his fascinating and expertly sourced book: 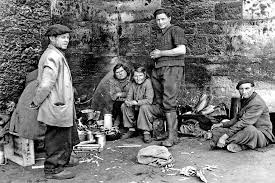 Anonymous 1954 photo of clochards in Paris; from the Flickr page of Jean Paul Margnac

“in which a bookseller rescues from the Seine an uncivilized free spirit named Boudu, who proceeds to call down chaos upon the bookseller's tidy existence. Boudu, large, hairy, and inarticulate, was probably intended (by René Fauchois, the playwright on whose work the movie is based), as a child of nature out of Rousseau, but the way Michel Simon plays him leaves little doubt as to his social category: even though he doesn't seem to be a drunk, he is inescapably a clochard.
“This word, the first published use of which was apparently by Aristide Bruant in 1895, derives from cloche (bell) and signifies a bum or hobo. There are various theories as to its etymology: that it comes from an argot term for 'limping'; that it alludes to the bell announcing the official end of marketplace hours, when scavengers were free to collect unsold produce [gleaning]; that it evokes beggars who rang bells to accompany their pleas; that it summons a memory of when the post of bell ringer at various churches was given to the neediest member of the congregation. My favorite, though is Jane-Paul Clébert's, that the cloche is the sky, and all who sleep under it are its children.
“A North African immigrant who became a clochard explained to Robert Giraud [Les vins des rue, 1983/'55] in the early 1950s that:
“'it's easy to become a clochard in Paris. One day you put on a jacket and you say, that's my shirt, and then you put on another jacket and this time you say, that's my jacket, and then you slip on a third – my overcoast. After that you go sit on the quais and you meet other guys like you, also clochards, and with them you smoke some butts and you drink some liters. At night you sleep under the bridges or on top of the sand heaps. When winter comes the clochards die like flies, because it's cold and they don't have on enough jackets, but that's how it goes. In spring others will come and the cycle will start all over again.'”
“The clochard drinks and sleeps, and scrounges or begs or steals or sells junk on Sundays at Sant-Médard or works up schemes or sometimes takes on labor at Les Halles or on the docks. There were old clochards and young ones, mostly men and a few women, quite a few couples – Giraud met a man and a woman who'd been bumming together for 27 years. For that matter he met a grandmother, father, and son, all clochards and happily drinking together. Some were lifers, at it since they were kids. Others had had previous lives, real or imagined. This one claimed he'd been a professor of philosophy, that one was a retired librarian from the Bibliotheque Nationale, another had spent 40 years in the Bats d'Af (the Battalions d'Infanterie Legere d'Afrique, the disciplinary corps) and had the tattoos to prove it.
“They slept on the quais – those by the Gare d'Austerlitz were particularly commodious and reasonably untroubled, and enteprising clochards built shelters out of crates and planks and maybe car parts. Or in decent weather sometimes they camped in vacant lots. Or else they slept in abandoned houses or sheds in courtyards or maybe empty attics in otherwise occupied houses. If you were bold and discreet you might climb up to the top story of some apartment buildings and start trying doors – you had a good chance of eventually happening upon an unused storeroom. There were innumerable places to sleep with reasonable protection from the weather, but you had to really want it. “All those hideouts are impossible for the ordinary piker down below to find, pounding th epavements with his nose in the air. You have to have a vital need, be obsessed with the idea of four walls and a roof, of a shelter from the elements, at the same time that you are categorically refusing to be jammed in with others in a barracks.” Giraud observed that “a sleeping clochard always looks like a corpse, ideally a headless corpse. Before checking out, as a matter of protection, he wraps his head in a newspaper or a rag, or hikes up his jacket or coat or shirt, whatever he has on. The ostrich, also a biped, does the same.” The alternative, for the desperate or in times of police crackdowns, was called refiles la comete, “to retrace the path of the comet” – that is, to keep walking all night....