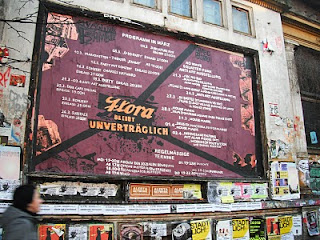 “Prepare for the General Strike” 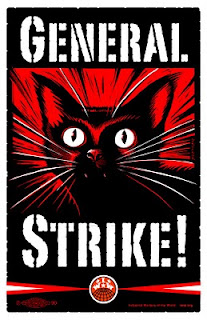 Eric Drooker's sticker for the IWW Madison is getting us ready -- "Be prepared for the General Strike if and when it is called..." (The feline lead in the picture is the anarchist 'sabo-cat.')
Now it continues... More and more Republican-controlled states in the U.S. are trying to break their public employee unions. (My information is mainly from the close daily reporting of democracynow.org newscasts.) A chief target is teachers. Maybe in a while teaching will become a job for which you only need to know how to read – like in Afghanistan, a country to which Slavoj Zizek recently compared the U.S.. In addition to the prolonged occupation of the Wisconsin statehouse in Madison, there have been other demonstrations at the statehouse in Michigan. Although the attack on the politically powerful public sector unions is happening in other states, Wisconsin's right wing is taking the hardest line. (Home of Joe McCarthy, after all.)
My mom is there, watching TV and fretting. Now, apparently, despite the flight of the Democratic legislators to avoid having to lose the vote, the governor's union-busting bill has passed due to some shifty parliamentary maneuvering. Already, over the years, unions in Wisconsin have been weakened by the corporate flight of jobs to other states, and overseas. For Wisconsin, the pauperization of the public education system spells an end to a future skilled workforce. The right now is closing in for the kill. If these chumps get their way, Wisconsin will become a right-to-work state, like Mississippi – ripe to exploit a non-union work force. The campaign is well-orchestrated. Now, paid advertisements are running, setting private sector workers against public sector union workers. Likely then big corporations like those controlled by the infamous Koch brothers will come in with lots of nice low-wage jobs. My mom is appalled. She says, “Everything I've taken for granted all my life” is over with. Everything is being dismantled so easily, and so fast. Now she can see how it went in the Weimar Republic with their famous vacillating socialists. Of course there is fightback, like the doomed Spartacists of Berlin. The ever-busy Edu-Factory website tipped me that the University of Wisconsin at Milwaukee's theater building has been occupied by students resisting Governor Walker's planned cuts.
Yesterday, Wednesday, March 9, 2011, I listened to Naomi Klein speak to Amy Goodman. Klein is the author of “Shock Doctrine,” the classic text on how hypercapitalism uses crises to impoverish workers and privatize public goods. For the right, crisis is opportunity – and the economic crisis is their chance to push through legislative measures that strip workers of rights. It's the climax of a 50-year war against trade unions; public sector unions were the last union stronghold, and now they're going after it. For Klein, the mass mobilizations in Wisconsin are an example of how to resist the shock doctrine. Why would the troglodytes do it? Money, duh. All of these care-giving services, services that mainly women provide can be very profitable if they are privatized. Ultimately, it's a corporate coup d'etat: the government is dissolved, and a company takes over. (This has happened, she said, in Sandy Springs, Georgia.) You don't get to vote. But you still pay taxes. (Sound familiar? Hmm... 1776? Ask Aaron Burr.)
And our president? According to Klein, there's been a lot of denial about who Obama is. Mainstream organizations have been waiting to see what Obama was going to do. (Even as they withdrew support for political direct action.) And behold, he didn't really do very much to end the privatizing and exploitation.
Where can unions go? What can they do? I have always somehow believed in a syndicalist solution – contest the corporations on their own ground, like Mondragon in Spain. Already it seems the Alinsky Foundation, the Industrial Areas Foundation (which nurtured the Cesar Chavez's UFW in the 1960s) is moving in this direction, designing co-op health care, and co-op housing alternatives to foreclosures and the like. Organizers are at work and things are happening.
While it may be only art, a lot of aesthetic and conceptual thinking has gone into these kinds of ideas. The irrepressible Steve Lambert pumps his Anti Advertising Agency, which includes the Samaras Project, about alternative economies. This was run by Josh MacPhee and Dara Greenwald -- I am always amazed by the stuff these guys get up to. These and other artists are opening roads that others can travel. I mean, they are talking Venture Communism!
Last U.S. news concerns resisting the plans of Big $ U's -- In Florida, a classic tree-sitting occupation is one month old – defending the Briger Forest of Florida, upland pine scrub and home to endangered tortoise and fern. It is slated to be razed for the Scripps Institute biotechnology and bio-science facility. Everglades Earth First! calls for donations to support the tree-sitters.
Meanwhile, here on the continent, the Madrid social center Tabacalera has been closed for a week to hold a series of internal discussions. This weekend there is a seminar to consider the effects of the right-wing neoliberal city government of Madrid. Again, I will be out of town... And on the shining isle – A group calling themselves Topple The Tyrants have just occupied the £10m Hampsted Mansion of Saif Al Islam Gaddafi, in solidarity with the Libyan people and their struggle to overthrow the murderous Gaddafi regime. A spokesman for the group said “We didn't trust the British government to properly seize the Gaddafi regime's corrupt assets, so we took matters into our own hands.... The British government only recently stopped actively helping to train the Libyan regime in 'crowd control' techniques, through the Department for Business Innovation and Skills and a Midlands-based arms manufacturer, NMS Systems.” I'd say watch your asses – the Libyan secret police may try to shoot you – they did that before, during a protest at the Libyan embassy in London in 1984. Killed a young policewoman.