A year ago I finished two books on squatting – Occupation Culture and the anthology Cultural Production in Occupied Space. I planned to go forward with another, a case history of a group of squatted social centers in Europe. There are many fine examples of autonomous self-organization of political and cultural people in occupied spaces which later became public resources, enriching their cities. The social centers are all pre-eminently local institutions (albeit of the “monster” type), and are only occasionally linked in inter- or national networks.
But, as the U.S. turns hard right, it's clear that this mode of grass roots urban development is likely to be repressed. Squatting will not be tolerated, nor is it likely to be developed as civic policy anywhere in the country, as it has been in Europe. The political environment for such policy innovation now seems hopeless.
Now, only resistance matters. And more, resistance that builds and sustains popular power, both political and economic. In the near term, I hope to be able to present some tools – examples of cultural, educational and political tactics, kinds of collective formations, and technological innovations that have and are being used in countries in the European Union to both seed and strengthen collectivity in cities. Many of these tactics have been used specifically to build citizen participation in political movements that have brought concrete electoral results. 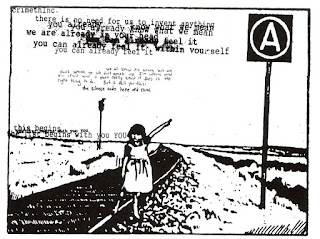 These tactical plans and formations will be drawn from various quarters without regard to political orthodoxy, although most come from the left. My hope is that they all be used towards the same end – to help activists and citizens build popular power of the kind that U.S. representative democracy has long been without – and is in fact purpose-built to exclude. Build enough popular power, and that may be something we can change. After all, the country has done weird things that way, like prohibit alcohol consumption and elect DJ Trump – it can even do something sensible.
This work I see as less an abandonment of my commitment to the squatting movement than a reaffirmation, a doubling down. Squatting expresses the ideals of the commons, coming from a view of the earth and its built resources as a “common treasury” for all. Just as proper governance is for the public good, so ownership is stewardship. If improperly exercised or abandoned, it may be abrogated, either temporarily or permanently. The more legitimate expropriation is performed by collectives; the most legitimate is civic. So it is that groups of squatters reclaim public and private buildings neglected by their owners, and at times these are returned by governance to full public uses.
A first principle of the squatting movement is autonomy. Squatters want nothing to do with government or capitalist economy. This is a kind of absolutism which has preserved the ethos of the movement as a kind of secret society of anti-capitalist pirates, a brotherhood [sic] of social bandits. This has assured a certain continuity, as generations of squatters arise from the weeds of the city to continue the tradition of living free, and for free. But, like bandits, squatters die young. Not literally, usually, but they cease to be squatters as they tire of evictions and rent or buy housing, tire of the cold and scrounged “freegan” food and take jobs. The autonomy of squatting, then, is all too often an autonomous interruptus. 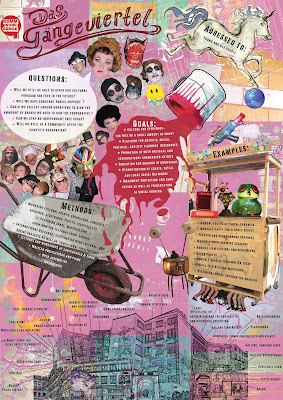 So is much political activism in the U.S.A., an adventure of youth. As people come to universities and colleges, they learn the facts about social, political and economic arrangements in our society. Many become politicized. Fewer remain so once they leave the warm waters of the class- and seminar room, ample public space for students, and tolerant atmosphere of collegiate institutions. The modern consumer society, as Debord observed 50 years ago, is built on techniques of separation. It is chill waters for collectivity. These have only increased in the intervening half century, to the point of a screaming intensity that today binds us by social media to portable communicating devices. We carry our separation with us.
To overcome autonomous interruptus, and the real world snuffing-out of political awakening, it is necessary to build autonomous infrastructure politically. That means not to become the slave of one's own idealism; not to imagine that the unicorn you are riding is real. The sweet perfume that drew you into this tent only lingers fleetingly. Breathe now the frosty air of political reality. That does not mean at all to abandon idealism, ideology, vision or purpose – only illusions, inhibitions and prejudices, thes habits of mind that the new political technicians of mass data have learned how to turn against us.
Do not succumb to their ancient evil art. Do not let the devils use your hatreds as a lever to move your soul. Remain in the real. Remain in love.
Yeah, so that leads straight into a rather advanced problem of the present-day Spanish municipalist movement – how to remain connected and true to the goals and intentions of the social movements which underlie their rise to elected office. But now I am way ahead of myself. We'll need to start with some basics....

NEXT: The New Municipalism: How Cities Can Advance Without the Federal Government

“America Needs a Network of Rebel Cities to Stand Up to Trump,” by Kate Shea Baird and Steve Hughes, In These Times, November 29, 2016 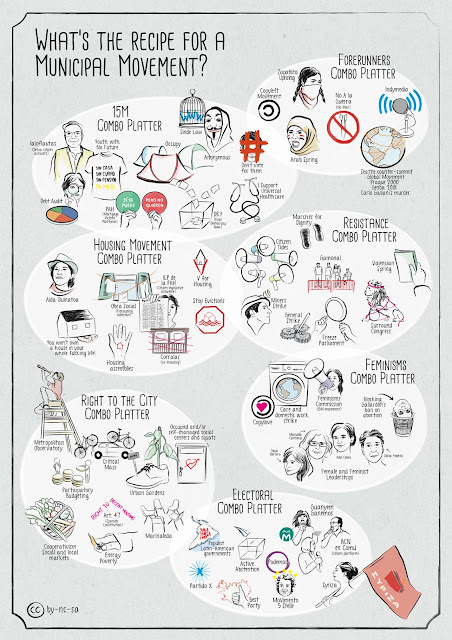