"House Magic" is up near Independence Hall 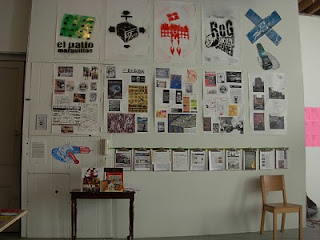 The Library of Radiant Optimism for Let's Re-Make the World
http://www.letsremake.info/

So behind here! Much action -- Philly coming up. But here's this now, for those traveling to the chilly northern midwest next month:
"Pedagogy of the Periphery" CAA Shadow Session
Wed., Feb. 10, 4-8pm, at Three Walls (119 n. peoria #2d, http://www.three-walls.org/ )
A workshop-style event on the history, practice, and theory of experimental pedagogy inside and outside institutions, in conjunction with AREA Chicago’s issue #9 (Peripheral Vision), the Open Practice Committee, the Emma Goldman Center for the Study and Practice of Creative Anarchosyndicalism, and the Radical Caucus for Art’s Autonomizing Practices panel at the College Art Association meeting. Educators and students discuss pedagogical practices, broadly defined—with their optimism, obstacles, methods, pleasures, and frustrations—with short informal presentations and time for large- and small-group discussion, including questions submitted for discussion in advance by students and flexibility to address current events as needed (such as events in the campus uprisings happening in California, Europe, and elsewhere). This free event allows people not attending the conference to benefit from a sampling of visiting speakers and Chicago teachers. It is not conceived as anti-CAA, but happens alongside the conference to illustrate the fact that some conversations are easier to hold outside the professional machine.
Tentative Program:
4:00 meet and greet
4:30 Panel I: Greg Sholette / Dara Greenwald / Liz Mason-Deese and Tim Stallmann
5:45 Panel II: Eve Ewing / Nicole Marroquin / Bert Stabler
7:00 Small group discussions / report back from small groups
wrap up
Posted by Alan W. Moore at 7:31 PM No comments: