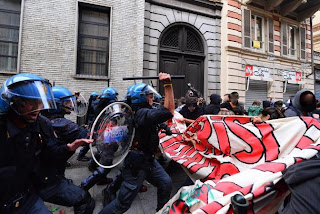 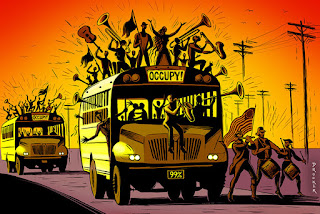 image by Eric Drooker
This blog is part of the “House Magic” research and information project on the culture of squats and occupations. The fifth number of the journal is now in preparation. It will include texts proudly pirated from around the worldwide web. Most of them, produced during these last two revolutionary years, must be edited for a limited paper space. As part of the editorial process, I'm putting up some of these texts now as links for readers of this blog to see. Analytic comments and glosses as well as personal experiences and viewpoints are welcomed. (Had I the skills and time, the whole thing would be available online in an expanded version; in the meantime, this is how it goes.)
The SqEK Group NYC Conference Proceedings
SqEK – Squatting Europe Kollective conference in New York City: Academic Papers February of 2012 saw a SqEK conference coinciding with the AAG meeting. A day of academic sessions took place at the Hilton Hotel – all the abstracts of the papers are posted at: https://n-1.cc/pg/file/owner/group:91603
“Squatting in Europe Now”
A public talk at the Living Theatre, NYC. A nearly complete transcript is posted at: https://n-1.cc/pg/groups/91603/squatting-europe-kollective/
Many of the talks were recorded and mounted to YouTube by Sebastian Gutierrez. There are four; the first is “SQEK I -- Squatting Europe Collective.” They include brief descriptions of the situation with squatting in the Netherlands, Italy, France, United Kingdom, and Spain.
Evictions
“The Necessary Squats,” by Miguel Martinez
Miguel of SqEK wrote this account of the eviction of CSOA Casablanca in Madrid in September of 2012. He was closely involved in that collective.
http://www.miguelangelmartinez.net/?The-necessary-squats
“The Sabotaj Story”
Story of the 2011 squat of a vacant supermarket in Brighton, protesting the supercession of a family-owned business by a chain store.
https://brighton.squat.net/?page_id=177
String of Evictions of Madrid Social Centers
Short reports – La Salamanquesa in Salamanca barrio, in May of '12; La Osera in Usera, and La Cantera in Vicálvaro in July.
La Salamanquesa – http://www.madridiario.es/2012/Mayo/canal-social/217518/policia-desalojo-centro-okupado-salamanquesa.htmlml
La Osera – http://ccaa.elpais.com/ccaa/2012/07/05/madrid/1341504517_666016.html
La Cantera – http://lacanteravicalvaro.wordpress.com/
“Creative Destruction,” by Jens Balzer
New York Times blogger argues that the final eviction of Tacheles in Berlin is a “normal” part of gentrification. Now young people must get together and buy properties.
http://www.nytimes.com/2012/09/20/opinion/creative-destruction-of-an-artists-center-in-berlin.html?pagewanted=all&_r=0
Education
“Contaminating the University, Creating Autonomous Knowledge: Occupied Social and Cultural Centers in Italy,” an interview with Claudia Bernardi
Bernardi discusses ESC, the Rome social center as an “occupied atelier for self-education.” She also talks about the relationship the extra-legal project has with the university, and ESC's work with immigrant communities. The recent theater occupations she says come from the idea of culture as a common good.
http://classwaru.org/
The Victor Martinez Community Library, Oakland, California
Abandoned library brought back to life.
http://occupywallst.org/tag/biblioteca%20popular/
Housing
“Spain: The Big Squat,” by Ter Garcia
This March 2012 roundup of squatting in Madrid focuses on the relationship between the 15M movement, the neighborhood assemblies, and the banks.
http://www.counterpunch.org/2012/03/02/spain-the-big-squat/
“Real change needs massive support. Art affects only a minority” – An interview with Jeudi Noir
This December 2011 interview concentrates on the tactics and aesthetic techniques that the Paris-based housing group uses in their occupations. Includes a timeline. By curatorial consultant Anne Faucheret for Steirischer Herbst arts festival.
http://truthisconcrete.org/interviews/real-change-needs-massive-support-art-affects-only-a-minority-2/
“Notorious Possession: Occupying Foreclosed Homes With Art” by Robby Herbst
A September 2012 story about artist Olga Koumoundouros, and the foreclosed house she occupied in the Van Nuys area of Los Angeles, California. Discusses her engagement, techniques, and the neighborhood groups she worked with.
http://www.kcet.org/arts/artbound/counties/los-angeles/notorious-possession-olga-koumoundouros.html
Correspondents
“Call for ‘No Borders’ – Borders Exist to Exclude,” by Sutapa Chattopadhyay
An extensive article by SqEK member, based on her interviews with Bangladeshi immigrants at the CSOA Casablanca in Madrid.
“Non vengo dalla luna: Short Report of a Political-Theater Experiment,” by Carla Vitantonio Account of a 2010 tour of Italian social centers by two theater artists.
Advertising
SqEK member Mujinga produced #7 of "Using Space" in August of 2012, a zine about squats, social centres and alternative ways of living. It includes an update on the criminalisation of squatting in England and Wales, and excellent memoirs with lessons learned by squatters in London and Seattle.
28 pages including cover; formatted for double-sided printing
http://zinelibrary.info/using-space-seven
“Squatting in Europe: Radical Spaces, Urban Struggles,” edited by the Squatting Europe Kollective
forthcoming from Autonomedia in 2012
Table of Contents is at – https://n-1.cc/mod/threaded_forums/topicposts.php?topic=1046942&group_guid=91603