The "House Magic" zine #5 for Spring 2013 is posted at long last at the House Magic website. The annotated contents are pasted below. This is the last issue of the journal that will be entirely produced by this blogger. Future House Magic production will be undertaken by a team which is even now struggling to assemble a new website for the project. Occuprop blog goes on, of course, recording information about my peregrinations in the quest this year to understand the art/squat relation. Next public stop -- Quartair, in The Hague, Netherlands. I'll be participating with the Artcodex group in a show called "Ghost Modernism." The House Magic contribution, produced in collaboration with the SqEK group, will consist of a low fence for folk devils, plastered with images and texts relating to the political squatting movement. Jump it if you can!

The House Magic zine catalogue #5 was composed in January of 2013, and finished in April of 2013.
the annotated Table of Contents:

Editorial – “It's not only gypsies and punks anymore.” The global Occupy movement has reanimated the tactic of occupation, and squattings have swelled with new activists with new intentions
Evictions – “Necessary squats.” Miguel Martinez reflects on the life and times of CSOA Casablanca. Alberto Corsín Jiménez and Adolfo Estalella take a “Jane's Walk” through Lavapiés. Jens Balzer records the “Creative Destruction” of Tacheles in Berlin. “The Sabotaj Story” tells of a Brighton group's attempt to stop a grocery chain's advance. Jacqueline Feldman recounts the “Winter Truce” that gave a music squat a respite.
Housing – “The 15-M Movement in Spain” by Ter Garcia is the story of a movement convergence. An interview with the Paris group Jeudi Noir reveals their methods. Robby Herbst is about “Notorious Possession: Occupying Foreclosed Homes with Art” in Los Angeles.
Showing Occupy – The “Occupy Bay Area” show in San Francisco traced a hidden history of resistance. HM tracks some of those routes.
Occupy Art Meeting – A number of meetings between artists and movement activists took place in Europe last year. HM reports on the Berlin Biennale, and the Graz, Austria festival. “We Are Not Representable” is an anti-art declaration. “BB7 Conversations” continue, with arguments, and, finally, a recommendation: “How to Build up Horizontality” in the artworld.
Theater – A report on the widely influential “Teatro Valle Occupation” of “Rome's Oldest Theater.” It has been followed by a “Theater Occupation Wave” in Italy. Two years before, D.B. recounts an adventure of movement theater on the road.
Festivals – HM reports on a number of convergences and festivals, mostly up with one down. Art Squats – The infamous “Mayfair Squatters” of London, the posh party people, speaking for themselves. Their Paris inspiration, “History of 59 Rivoli,” “l'essaim d'art.”
Education – “Contaminating the University, Creating Autonomous Knowledge,” Claudia Bernardi tells Class War University interviewers about Rome's ESC. Meanwhile, Oakland activists try to reboot a historic public service by “Liberating a Shuttered Library.”

This is the last issue of "House Magic" to be published in this way. The project will mutate in 2013.

“Squatting in Europe: Radical Spaces, Urban Struggles” book, and Across the USA 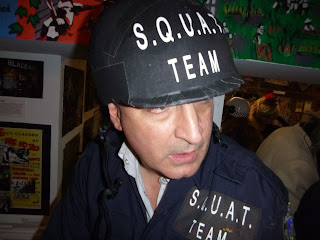 Back from a vacation in Athens -- calm, sunny, perfect weather, and absolutely nothing happening. The bomb went off before we came, and it was all cleaned up... Overloaded with info, natch, but I wanna get this book news out now. The SqEK book was celebrated in Paris last month.
You can get “Squatting in Europe: Radical Spaces, Urban Struggles,” edited by the Squatting Europe Kollective online as a download at – http://www.minorcompositions.info/?p=504, the website of the UK publisher. A bunch of the books have been sent to the USA, but it will take a while to get there. Also Hannah Dobbz' book on U.S. squatting is out, and she's touring...
The blurb follows:
“Squatting offers a radical but simple solution to the crises of housing, homelessness, and the lack of social space that mark contemporary society: occupying empty buildings and rebuilding lives and communities in the process. Squatting has a long and complex history, interwoven with the changing and contested nature of urban politics over the last forty years.
“Squatting can be an individual strategy for shelter or a collective experiment in communal living. Squatted and self-managed social centres have contributed to the renewal of urban struggles across Europe and intersect with larger political projects. However, not all squatters share the same goals, resources, backgrounds or desire for visibility.
“Squatting in Europe aims to move beyond the conventional understandings of squatting, investigating its history in Europe over the past four decades. Historical comparisons and analysis blend together in these inquiries into squatting in the Netherlands, Italy, Spain, France, Germany and England. In it members of SqEK (Squatting Europe Kollective) explore the diverse, radical, and often controversial nature of squatting as a form of militant research and self-managed knowledge production.
Essays by Miguel Martínez, Gianni Piazza, Hans Pruijt, Pierpaolo Mudu, Claudio Cattaneo, Andre Holm, Armin Kuhn, Linus Owens, Florence Bouillon, Thomas Aguilera, and ETC Dee.
“Amidst the proliferation of post-political banter, it is refreshing to see the time-tested politics of pre-figurative direct action being taking so seriously. This is a must-read for anybody who wants to better understand how the politics of squatting offer a set of transformative strategies for a creating a more egalitarian world. Furthermore, this collection illustrates how such transformative politics so often start in the world’s cities through deliberate organizing and thoughtful reflection by committed groups of activists, scholars and everyday citizens.” – Nik Heynen, University of Georgia
“In an era of austerity, capitalist accumulation by dispossession, and the criminalization of protest this excellent book serves as an inspiring and timely reminder of people’s re-appropriation of urban spaces in order to fashion alternatives to the status quo. Structured around a typology of squatting configurations – as anti-deprivation; entrepreneurial; conservational; political; and alternative housing strategies – this empirically-rich collection of essays by scholars and activists provides persuasive evidence of the creativity and politically transformative potential involved in such practices.” – Paul Routledge, University of Glasgow
Bio: Squatting Europe is a research network focusing on the squatters’ movement. Our aim is to produce reliable and fine-grained knowledge about this movement not only as an end in itself, but also as a public resource, especially for squatters and activists. Critical engagement and comparative approaches are the bases of our project. The group is an open transnational collective (SQEK) whose members represent a diversity of disciplines and fields seeking to understand the issues associated with squats and social centres across Europe.
In other news,
Hannah Dobbz is touring her book "Nine-Tenths of the Law Property and Resistance in the United States" from AK Press. (See http://www.akpress.org/ninetenthsofthelaw.html for description and order info.)
She is roaming the country of the Settler State this spring -- April 6, 2013:
3 – 5 p.m. The People’s University lecture series
@ Carnegie Public Library (Main Branch) Pittsburgh, PA
April 9, 2013
4:30 – 6:30 p.m. MPR (Multi-Purpose Room) @ Tulane University NLG
New Orleans, LA
April 11, 2013
7 – 9 p.m. @ Treasure City Thrift 2142 E. 7th St.
Austin, TX
April 16, 2013
6 – 9 p.m. with Steve DeCaprio of Land Action and Becky Dennison of the LA Community Action Network @ Blood Money 1725 E. 7th Street, Unit C
Los Angeles, CA
April 19, 2013
6 – 10 p.m. with Steve DeCaprio of Land Action @ The Looking Glass (address available upon RSVP) Fundraiser for Land Action – $20
Oakland, CA
Buy tickets at http://www.brownpapertickets.com/event/349165
April 20, 2013
7:30 – 10 p.m. + dance party afterward @ Hotmess/RCA Compound 656 West MacArthur Blvd. (@ MLK Jr. Way) Oakland, CA
May 3, 2013
(details TBA) @ Loyola University Chicago, IL
May 5, 2013
(details TBA) @ Indiana University
Bloomington, IN
Photo: TimesUp Bill relaxes in the basement of the MoRUS museum.