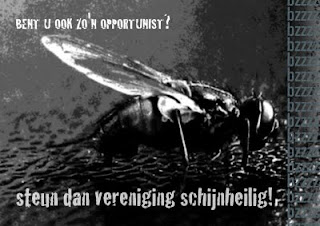 When I was visiting at W139 in Amsterdam in May, I heard good buzz about Schijnheilig (Shine-high-lig). I headed over there late one night, after a poetry music festival, and saw that it was a big place, in a former school. They got kicked out this month. But no matter – they are going on to another place, as they have done for a number of years... This was the spirit of the squatters I met at Le Bourdon-L'Arsenal in Paris, painted on the facade of their okupa: “si vous nous expulsez ici... nous squatterons ailleurs/ nous n'arreterons jamais!”
Filmmaker Tino Buchholz has posted an interview with two Schijnheilig occupiers on YouTube – http://www.youtube.com/watch?v=oGtrRKtBGgk. Tino produced a film “Creativity and the Capitalist City: The Struggle for Affordable Space in Amsterdam” (premiering next weekend) which examines the situation in which artists find themselves in that city today. The mainspring of the film is the conflict between the decades-old squatting movement in the city and its neoliberal commercial enemy, the “anti-squatting” businesses that fill empty building spaces with resident “guardians” on short-term contracts.
Tino writes, “With this film I want to cover the creative city/ creative class debate at its high peak - tracing its urban roots - and aim to portray the wider picture of the struggle for affordable space in advanced Western capitalist cities. This film is more than a local documentary on Amsterdam. The hype around the creative city began already a decade ago, it is global in scope and about to reach its peak. What happens when the hype is over? Housing as a job or the Right to the City? In this sense, the film explores the latest urban re-/development pattern in advanced Western capitalist cities and links it to existential struggles for affordable housing and working space in Amsterdam, such as temporary accommodation, squatting, anti-squatting and some institutional synthesis: 'breeding places' Amsterdam. Especially Anti-Squatting, the market answer to squatting, poses a threat to the Right to the City, how to address the question of vacancy in the future. Hence, one of the crucial questions is: Housing as a job (living as a Guardian) or the Right to the City?” Tino is working out of Technische Universität Dortmund.
IN OTHER NEWS, “A Brief History of Squatting in Brighton,” Mujinga's new zine is available from northern-indymedia.org/zines/2075 -- as: “using space 5” -- he is blogging at -- https://network23.org/snob/. He informs us of a new grab! -- “Building in Central Brighton Occupied in Solidarity with June 30 Strikes – An abandoned shop front in Churchill Square, Brighton’s biggest shopping centre, has been occupied in solidarity with striking public sector workers. The building had been empty since August 2010 and the occupiers are already making repairs in order to rescue the building from dilapidation. The space will be used to form links between the striking public sector workers and other members of the public who are affected by the government’s public sector cuts, such as students, benefits claimants and private sector workers. Starting June 30th, the day of the strikes, the space will be open in the daytime and used as a place for people opposed to the cuts in general to meet one another, drink tea, and find out about anti-cuts actions. At 6pm everyday there will be an Anti-Cuts Forum, a public meeting open to all to participate. From 8pm until the space closes at night there will be film screenings and acoustic music. Drugs such as Alcohol, Nicotine and Ketamine are strictly forbidden in the space, along with all forms of oppressive behaviour such as Racism, Sexism and Homophobia. The space is non-party political and is open to anyone opposed to the government’s public sector cuts is welcome to the space at 29 Western Rd, Brighton, on the corner of Churchill square. All enquiries to 07563696458.” Cheers!
*******************
it's done -- Schijnheilig got the boot a couple days ago – here's the video --
http://nos.nl/video/253638-politie-amsterdam-ontruimt-kraakpanden.html
rockin' squattin' action!, complete with noise-rock soundtrack...
Posted by Alan W. Moore at 3:58 AM No comments: