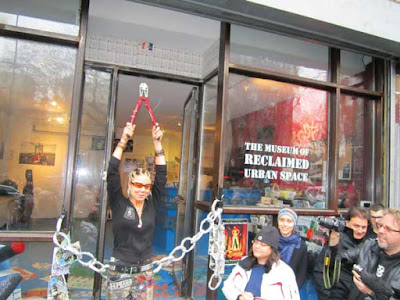 The inimitable Fly, graphic artist suprema, hoists the cremonial bolt cutters at the opening of the MoRUS museum in NYC

Opening Preview: Friday, Sept. 11. 7 - 10pm
Open Saturday + Sunday, Sept 12 -13, 12 - 5pm
Pockets of the underground continue to exist and re-form themselves amidst the city's current hyper gentrification. New generations flock to New York in order to “make it” their own and compete in the arena of history makers. For one weekend only, Booklyn presents a prominent culture war of squatters, itinerants, anarcho-punks, community gardeners, and artists who banded in different capacities to call of one of the most expensive American cities home.
Last Squat City: A Fly’s Personal Archive is culled from the extensive archive of artist, activist, squatter, and Lower East Side icon, Fly, whose zines and comix (including PEOPs, Dog Dayz and Zero Content), and illustrations (MAXIMUM ROCKNROLL, Slug & Lettuce, World War 3 Illustrated, NY Press, etc) documented the squatters' movement resisting real estate developers, avoiding police batons, fighting off evictions and sometimes rioting; all of which frightened the complacent yuppie invasion. Fly landed in the Lower East Side in 1988 and immediately became an active participant in the burgeoning network of squats (Glass House, Fetus, Umbrella Haus, C Squat, to name a few) and alternative art spaces (ABC No Rio, Gargoyle Mechanique Lab, Bullet Space).
Running for one weekend only, the exhibit and fundraiser will showcase Fly's personal collection of zines, comics, illustration, and, of special interest, parts of her DIY'ed personal wardrobe. Also for display will be an array of historical documents representative of New York City 90’s network of underground culture.
Visitors can purchase donation packets which contain multiples of Fly’s idiosyncratic visual work from the early 90’s to the present day.
37 Greenpoint Avenue, Suite E4G, Box 23 , Brooklyn, New York, 11222 718-383-9621 www.booklyn.org: rlee@booklyn.org
Curated by Richard J. Lee

PS & BTW -- I'm blogging now and again on my book tour for Occupation Culture at: http://occupationculture.net/category/news/

I'm in the USA, doing a desultory tour of my book, "Occupation Culture" and the anthology "Making Room". I'm based in Milwaukee with my partner Malena taking a sabattical from her job. We tripped upstate with Dan Wang last month, to the artists' residency ACRE, west of Madison.
That sprawling place is in the "Driftless" region of the state, where the glaciiers did not pass. The lovely rolling hills of this farm country make a pleasing rural setting for the residency. It's built by an architect who is very into salvage. Large beams of old growth wood from Chicago's tear-downs have been used to build the lodge buildings, and an airplane hangar was disassembled to make the cafeteria and workshops. My talk took place in a kind of screened in area with the artist residents seated on bleachers salvaged from a high school. It was performative, and concluded with Dara Greenwald's wonderful short film, "Tactical Tourist". We met Claire Pentecost and Brian Holmes as they emerged from tubing down the river next to our "rustic cabin" -- (that means cold shower, brr!). The next day our host, Dan Wang, took us on to Viroquia, where we visited the massive Driftless Books store in an old tobacco warehouse. 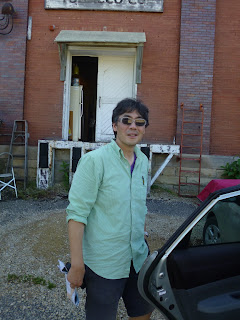 Our guide and host, Dan Wang, outside the Driftless Books loading dock, Viroquia, WI
Back in Madison, we saw the famous farmers' market around the state capitol building. Had to buy a shopping bag... Wisconsin has a very strong local food culture, and we were happy to visit large sprawling cooperative supermarkets in Viroquia and Madison both. This is the future, we must hope, and a far cry from the out-of-the-corporate-can feedlots one finds on the U.S. interstates.
Just this week we turned east, to Michigan. Our first stop was Flint... after a long long drive, like Midwesterners often do.
Flint is a famously afflicted city. Famous, because of Michael Moore's film "Roger and Me," which details the systematic betrayal and abandonment of the city by its major employer, General Motors. It has fallen into steep decline since, with massive house leaving, epidemic arson, torturous crime rate -- your regular rust belt nightmare. Stephen Zacks, a New York City based writer, is a native son. He's set up a public art program there as a giveback to his boyhood home.
We lit out for Flint from Milwaukee late in the day. We still hoped to make it by nightfall... Fools, we'd believed the online travel times (Michelin and Google). 1) You don't take 94 through Chicago, you take 294, the ring toll road through Cicero (it's still a hairy hourlong ride with heavy trucks, but at least you're moving); 2) Michigan time is an hour ahead of Wisconsin. Our hopes of arriving for the Flint Art Parade were quickly dashed. Stephen Zacks, our host, had also scheduled my talk for that night, not the next day as I'd thought, and that was not going to happen. We made it to a chain motel outside Battle Creek, which appeared to be run by ex-junkies, in a room spittin' distance from I-94, which serenaded us all night. Dinner was at Denny's, the 24/7, with a gallery of weird Americans sauntering, hulking, wheeling in and out.
We arrived in Flint the next day, and Stephen gave us the tour of his public art project. The office is in a downtown building that served once as an all-ages music venue, and today has numerous other leisure and service offerings. We met the project's young French architecture intern. Flint has a Land Bank run by the county, an office building downtown which hands out abandoned properties to those who show they might make something of them. Stephen has two -- one, a living space and planning center for those working on his public art project, and the other a painted decorated supply shed. Other houses nearby are abandoned, painted on, and squatted.
Two had been recently burned, and neighbors were pitching in to help clean up one of them. We were invited inside to see the fine 19th century decor of the house by two guys who seemed too old to be doing the heavy demo cleanup they were doing... but Michigan grows them hardy.
An old comrade, the artist GH, had built a white spiral construction supporting a chute-like form for this year's project. The city building department had taken umbrage, insisting it come down. Stephen was circulating a petition to save it in the neighborhood. We met the mayor, then a couple of local machers standing in an open-air gallery of bronze figures depicting town heroes of the modernist era (e.g., Mr. Chrysler, and others more familiar as brand names). We saw the GM heir who runs a foundation hustling down the street, talking on his cel phone, on his way to his office in the town's only high rise. 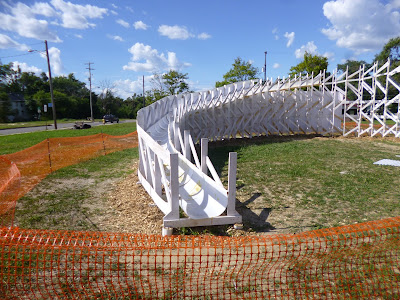 GH's sprawling white sculpture on a patch of vacant land in Flint, MI; it's been roped off as 'unsafe' at the insistence of the building department
Stephen described the lay of the funding landscape. He is doing what he can in a country that basically doesn't believe in art, nor understand art and artists. Nothing much can be done about that, I think; but I am wondering what I can do in Flint when I next return to that challenging city.