On Learning and Un-learning

Autonomous self-organized education, mutual aid learning, is a cornerstone of radical organizing. Institutions – the creatures of the state, of churches, and of immoderate wealth – cannot be trusted..
In addition to 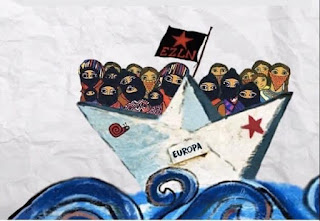 the historical examples of leftist workers self-education, a staggering number of autonomous learning projects have been launched in the last 20 years. (See note below for a precis of some of them.) The main initiators of more recent ventures have been artists. As constant learners, of new processes and new ideas, and as a special class of precarious workers, artists need to socialize seriously – and learn things together.

From Across the Sea

This year European anti-capitalist movements received a morale boost from the visit and tour of a group of Zapatista activists. They call it the 500 year “reverse invasion” from Chiapas. The anniversary is Cortez´s conquest of Mexico in 1519-21. The company crossed the ocean on a sailing ship, and arrived in Madrid this summer. Since then the Zapatistas have been touring the European continent, meeting with activists all over Europe. Their strength comes from their long experience of organizing their largely indigenous communities and battling for autonomy against an angry state in the province of Chiapas. The poetic language of their statements is especially influential, as it is articulated by their principal interlocutors to the non-indigenous world, most notably Subcomandante Marcos. 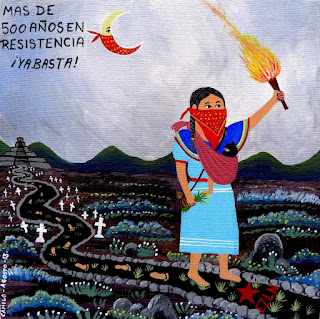 The Zapatista movement announced itself in 1994 at the same time as the notorious NAFTA free trade treaty came into effect. They opposed themselves specifically to this neoliberal dreamworld which has since blighted working class prospects on both sides of the border, and especially devastated Mexican campesinxs. In the mid-90s the Zapatista movement inspired activists in the USA with the idea of “counter power”, exodus, and the need to set up alternative institutions. Anarchists opened infoshops and skill shares all over the country. In time, the practical drain on scarce resources closed many of these early places, but many remain and new ones opened. In Europe, the Zapatista example boosted left movements, together with the powerful mobilizations of the Global Justice Movement against the World Trade Organization ministerial meetings which spread free trade agreements across the world.
Unlike the hapless US anarchists, who had to pay rent, radical left movements in Europe occupied and maintained large building social centers which served as centers for organizing the demonstrations in the different cities where the WTO meetings happened. 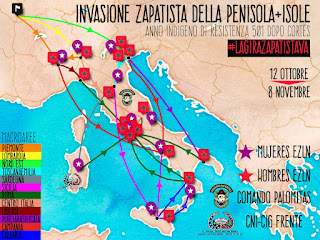 In September of this year, the Institute of Radical Imagination hosted a four-day program to coincide with the arrival of the Zapatista contingent in Madrid. “On the Precipice of Time: Practices of Insurgent Imagination” involved both activist groups and institutions, among them the Reina Sofia Museum, Hablarenarte, Centro Cultural La Corrala, and the social center La Villana in the barrio of Vallecas.
Among the many participants, I had a chance to meet with Alessandra Pomarico from the alternative learning platform Free Home University (Italy) and Nikolay Oleynikov, part of the Russian group Chto Delat (“what is to be done”, the title of a famous tract of Lenin). I took notes on our talk, and include them below.
As well as participating in the encuentro, the two had set up part of a related exhibition with the poetic title Somos fragmentos de la luz que impide que todo sea noche" (We are fragments of the light that prevents everything from being night). That show, curated by Natalia Arcos and Mao Mollona, took place in a floor of La Corala, a charming obscure museum of popular culture, in a restored antique Madrid housing block.
The Somos fragmentos installation was a low-budget magical passage into a “Zapatistic” world, starting with video bits from Vietcong and Bruce Lee movies – “what the Zaptistas watched in the jungle” – and others of the campesinos chatting in the fields, raising schools and such. These videos, many by indigenous filmmakers from Chiapas, among them Liliana K’an Lopez, Delmar Penka Méndez-Gómez, Maria Sojob – engaged themes of women’s struggles against extractive capitalism (e.g., mining), ancestral knowledge, and the tensions between memory, tradition and historical change. A special guest video was by Francisco Huichaqueo, a Mapuche from southern Chile who also worked in Chiapas. 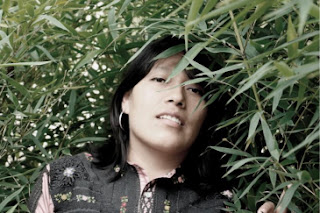 Still from "U Madre Luna" by Liliana K'an

(The Reina Sofia museum showed a concurrent program of indigenous filmmakers, called "But Tomorrow the Light Will Be for Others: Film and Indigenous Lives".)
After the numerous screens of videos, some rooms in the show at La Corala, artisanally spangled with tiny lights, recalled the brutal Acteal massacre of 1997 with impromptu altars on the floor.
Alessandra and Nikolay installed a “Provisory Learning Station” in the show. Their effort began with a long wall of printouts of collages, a timeline of Zapatista history enhanced with sinuous painted lines, map collage works done with migrants’ histories, and posters from the “Zapantera Negra” project of 2017, which brought Emory Douglas of the Black Panther Party to Chiapas. There was a library, and the last room was occupied with a table and chairs for a “Provisory Learning Center” open to groups to convene and discuss the content of the exhibition.
The show includes artifacts of the processes of learning and un-learning that the Zapatistas, Free Home University and Chto Delat have been using. What is exciting about this way of learning is that it is politically situated – built on a concrete set of social demands, and highly creative – using a combination of artistic processes and poetic story-telling. 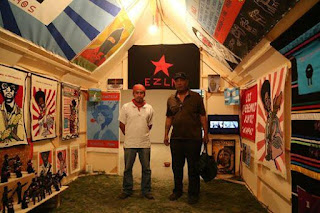 Emory Douglas in a replica tent, 2014

How in a group to recognize, hear and honor diverse experiences, and how to bring them together so all can benefit from the learning? These are classic problems of education – not how we master a curriculum, but how we learn from each other. And further how that learning together can build a movement of struggle. This can seem platitudinous – but finally to make this happen is not so easy.
I talked with Alessandra Pomarico of Free Home University and Nikolay Oleynikov of Chto Delat and FHU at a cafe inside the Reina Sofia museum courtyard. They have just produced a book, When the Roots Start Moving, which records in detail their and others’ experiences engaging with the Zapatistas and their ways of working.
A key event in the book and in the exhibition described above was the film Chto Delat made in Italy with FHU. The making of the film was the way to “build the learning session”, Alessandra said. Together with invited artists and activists, they worked with migrants, asylum seekers and refugees, and activist farmers using natural methods to reclaim the land.
“So this film takes place in this very place where these farmers live and work. We went there. We were always living together. And the film emerged by these relations that we were building. There was no script. There was a process.” 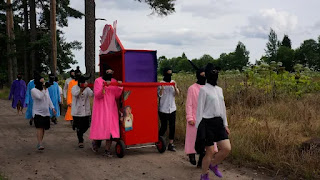 Another “Zapatistic film” was made in Greece with the School of Solidarities, a school maintained by voluntary teachers that started to help migrants learn Greek, and the basics one needs to navigate a new place.
In both places they read the fables of Subcomandantes Marcos and Galeano. These were used “a little bit like icebreakers. We read the fables. We see how they respond to all these very basic demands of the Zapatistas.”
These demands are universal. They ask for a roof, for education, for freedom, for democracy, for health. “So through the fabulation, the prefiguration that Marcos transfers in this beautiful novel we activated conversations.” 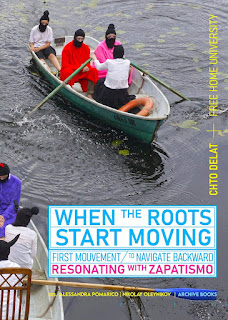 The engagement of European activists in these processes brought up the question of going beyond solidarity, an idea and a vision that “empowered the movement in Italy at a moment when so much shredded apart”.
The coincidence between the Zapatistas’ basic proposals and the demands of the Black Panther Party was the core of the earlier Zapantera Negra project. Emory Douglas, minister of culture for the BPP and Caleb Duarte Piñon of EDELO set up an artists’ residency program in Chiapas to connect and be in service with the caracoles of the Zapatistas.
The Zapantera Negra project generated beautiful works, posters and murals, that superimposed two iconographic sytems, the propaganda of the Black Panthers and the embroidery work and corn-centered imagery of the Zapatistas, like Huey P. Newton surrounded with corncobs. 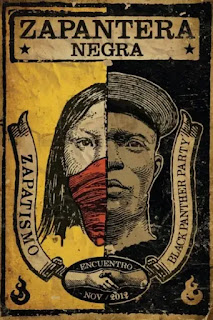 The Zapatistas, Alessandra said, “have this incredible capacity to self-reflect, and to build an archive and a process of research that is transmitted for everyone, not just the intellectual, not just to those that govern us, but to everyone…. We are not revolutionary as they are, we can only activate initiatives that make gestures toward something that we aspire to become. But the idea was to call a space of reflection about how we learn together, what is an autonomous space of learning, how we deploy them, each time maybe differently.” 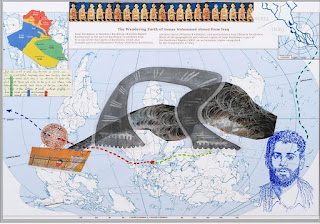 “So what we call space of learning is learning this, how we can un-learn all this necropolitics, this whole disruptive paradigm, and how we can learn with communities of struggle, how we can up-learn, from the bottom up, how we can produce different imaginaries so we enable ourselves to live different ways of living that are not so transactional…. Capitalism is based on the profit out of debt, the profit out of disposable bodies, disposable resources. We have to compost this paradigm. Maybe we are getting close to that. Our claim is we need space where we can learn that, collectively, horizontally. Sometimes it’s very painful, because to unlearn all our comfort zone, and all our way of living is very painful, but maybe it’s really necessary.”

The impact of Zapatista political thought on the west was exemplified by John Holloway’s book Change the World Without Taking Power. Here is an interview with the author:
“Walking We Ask Questions”
https://leftturn.org/%E2%80%9Cwalking-we-ask-questions%E2%80%9D-interview-john-holloway/

On the Precipice of Time: Practices of Insurgent Imagination
https://www.museoreinasofia.es/en/activities/precipice-time

Autonomous education goes back a long way in the 20th century and before. Workers’ education circles abounded, most famously those run by anarchists in Spain and abroad under the influence of martyred educator Francisco Ferrer. Anarchist ateneos exist to this day in Barcelona.
In the 1960s, well-known auto-education centers were set up in London and New York – the London Free School https://en.wikipedia.org/wiki/London_Free_School
and the Free University of New York
https://en.wikipedia.org/wiki/Free_University_of_New_York
At the turn of this century, numerous other self-education initiatives were launched in Europe, many in response to the Bologna Process of regularizing curricula and university management in the European Union. A standout among them was Copenhagen Free University
https://en.wikipedia.org/wiki/Copenhagen_Free_University
whose co-founder Jakob Jakobsen ahas continued investigating the history of self-organizing education, etc.
http://www.jakobjakobsen.net/
A sample of more recent initiatives must include the Public School, Los Angeles, California and beyond
(http://www.tpsla.org/) – an online platform for self-organizing classes of all kinds.
16 Beaver Group (https://16beavergroup.org/), New York City and beyond – an early 21st century space that convened regular assemblies of discussion and learning, which has recently revived an online assembly.
The rigorous investigations of groups like the Forensic Architecture group require learnings of a different level, more along the lines of new journalistic skills
https://forensic-architecture.org/ -- NGOs step up to do this for citizens, e.g.
https://tacticaltech.org/

Although I missed the 4-day encuentro, discussed in the text above, one of the featured speakers was Manolo Callahan, of the Oakland, CA Center for Convivial Research and Autonomy, whom I had seen speaking to the 16 Beaver Group assemblies. The CCRA has worked with the Zapatistas directly since they first emerged, running autonomous education programs for many years. A cornerstone of Callahan’s teachings come from the indigenous agricultural practice of the milpa, a sustainable system of planting in the jungle.

Works produced by Mia Eve Rollow with the Zapatistas