Gängeviertel: No More Pats on the Back

The efforts of the Gängeviertel artists are widely considered a success. Not everyone, however, is still thrilled by the project.

Editor's introduction: The artists' occupation of the antique Gängeviertel buildings in Hamburg in 2009 excited hope among many. It is an island of creative activity in a desert of big business skycrapers. The city legalized the squat, and the artists entered the long process of bureaucratic renovation, taking their place as poster children of official tolerance for alternative lives. In 2012 a book appeared commemorating the first three years of the Hamburg Gängeviertel, “Mehr als ein Viertel.” The book is beautifully designed; a gorgeously produced online "trailer" for the book is at http://buch.das-gaengeviertel.info/. It concludes with a link to a 33 minute video by Jessica Weichmann (in German).
Very shortly thereafter, this critique of the emerging conditions of the Gängeviertel project and its role in the development of Hamburg was written. It was intended to appear in “House Magic” #6, but that number was delayed. We present it here now.
by Michel Chevalier, Lena Kaiser and Rahel Puffert
HAMBURG | Three and a half years ago, on August 22, 2009, approximately 200 artists squatted the run-down buildings of the inner-city Gängeviertel quarter, thereby saving the remaining historical buildings from demolition. In so doing, the Gängeviertel protagonists drew attention to the fact that their strategy was an unusual one for squatters, collaboration with consevative media outlets (especially the Axel Springer-owned Hamburger Abendblatt) being one essential component. Success came: the city bought back the buildings a few months later, the occupants founded a non-profit, and are currently administering the buildings themselves.
An agreement signed in 2011 between the city and the artists states that the buildings are to “remain open to the broadest possible cross-section of the public through affordable spaces for housing, business, and sociocultural use.”
Current perspectives: salaried squatters?
The initiative is currently seeking an institutional status, and city-funding in accordance, for one of its buildings, the Fabrik. The situation is such that, according to Gängeviertel-spokesperson Christine Ebeling, “the Fabrik cannot continue to function on a volunteer basis on the long-term.” Eleven salaried positions are planned: three 30-hour-a-week jobs for general management, booking, and gastronomy management, five part-time jobs for additional scheduling, bookkeeping, custodianship, and technical support of events, and three further 10-hour jobs for continuity, fund-raising, and curatorial planning. The considerable support requested, €250,000 per year, was turned down by the city government. The initiative is now considering if it can streamline this plan or find additional funding.
The city is currently subsidizing the project essentially through low rents: the renovated areas of the complex cost 1€/m2. Single exhibition projects also receive funding. The Gängeviertel non-profit organization is itself operated through contributions and membership fees. Single projects are funded by various foundations.
Extensive renovation work of the twelve buildings will soon begin, at a total cost of €20 million paid by the city, Hamburg housing construction loans, and private capital. The buildings themselves are to thereby remain under the control and administration of the non-profit.
The sociocultural center the Gängeviertel initiative has strived for –  to include spaces for cultural events, exhibitions, and offices – is to open in 2015. 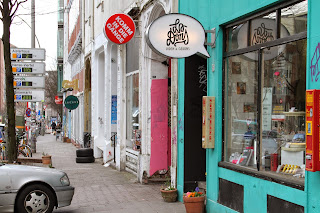 An Exemplary Project … but of what?
Since 2009, the Gängeviertel has taken on a significance beyond the Hamburg region, standing for successful resistance against both gentrification and deteriorating working conditions for cultural producers. But not all is rosy in the Gängeviertel: many one-time activists have abandoned the project. And not all cultural producers in other Hamburg spaces are happy about the Gängeviertel.
The Gängeviertel gave the city a chance to cast its policies as progressive and open to the creative scene. But one should not be deceived: other art spaces, such as Südbalkon (a bastion of critique of the upcoming IBA city-development extravaganza in the Wilhelmsburg district) and the experimentally-disposed Blinzelbar have had to close shop due to harsh local realities and city policies that fostered them. And so the city's message to the aforementioned creative scene has lately been, simply: there will never be another Gängeviertel.  The city's willingness to compromise with artists in other locations has receded at a quick pace ever since the Gängeviertel agreement: if artists or cultural producers ask the city if they can use empty buildings and spaces, the city invariably turns them down. The variegated art-space scene has thinned out parallel to the Gängeviertel story, falling victim to ubiquitous rent increases. Many say they stand no chance in the shadow of the Gängeviertel. At the same time, criticizing the Gängeviertel openly is a taboo few are ready to break.
Meanwhile, the Hamburg Cultural Affairs Office offers young artists the option of undertaking a socio-cultural project in the Gängeviertel – so long as they carry out the complete renovation of the location. Starting something new, parallel to the Gängeviertel, is not an option.
And what had once been a locally heated debate about notions of art and their relations to and consequences for public space –  of cultural policy (such as the Tamm-Tamm artists' protest against the dubious Maritime Museum of former Springer editor Peter Tamm) –  has in the last three years faded into a battle for studio space and affordable rents. A chapter of the recently self-published Gängeviertel book, “Mehr als ein Viertel” (More than a Quarter), which commemorated its third anniversary, is symptomatically titled: “Gängeviertel as a Prototype for Sustainable City Development Policy.”
Now that the project has been secured, the next question will be: which artistic direction should it take? Specifics have as yet been avoided, with the artists referring to the “Gängeviertel-as-Gesamtkunstwerk.” They have wanted to “keep things open” and view the complex as a “space for exchange, as a form at once of life, of work, and of habitat.” Art is thus a way of life, be it someone painting pictures and selling them in a gallery, planting flowers, or repairing bicycles.
Questions of what art should or shouldn't be were never raised, at least in the first days of the occupation, according to Gängeviertel activist Hannah Kowalski. “Discussions were more focused on social and economic conditions that need to be satisfied if one is to create art.” Negotiation strategies were the order of the day.
It is a curious fact that the significance of the Gängeviertel as it is perceived from outside seems thoroughly independent of what actually happens there. The location's power of attraction derives from the mood of insurrection, of a newly conquered location. The Gängeviertel  has become a magnet for tourists, for whom it is a stage of a seemingly unfathomable assortment of activities.
Everywhere both something and its opposite
The pluralistic openness, the welcoming of anything one moment and its opposite the next, has defined the structure of the Gängeviertel since its start: it has been deployed both naively and tactically. Yet it carries its risks. These are another topic of the book “ Mehr als ein Viertel,”  in which the project also reveals glimpses from behind its scenes, for the first time. In one section, activists who have dropped out of the project share their thoughts and criticism.
Beyond the efforts necessary to preserve the studio-buildings, beyond the frequently evoked success-story, this book shows that discussions about programmatic orientation are no longer to be avoided.
Demands for collective or artistic possibilities hardly arise when freedom is reduced to “doing whatever you want.”  They arise through negotiation and a certain relish in friction and difference to others.  This is the process by which each can sharpen the contours of his or her contribution to a commonly pursed project that avoids the rut of networking, teamwork, and a colorful potpourri.
The Gängeviertel's “pluralism” concept marks no distance to the culture-political mainstream. The latter posits all artistic forms and demands as deserving equal treatment, as if there were no difference between conservative and progressive, old and new, conformist and critical. Everything becomes equally irrelevant. Yet it is precisely such politics of trivialization that need to be confronted today.
Quick Facts
The Gängeviertel in Hamburg's central Neustadt district is the last representation of an architectural and building approach that was common in the city in the mid-seventeenth century.
The buildings were home to harbor workers and day laborers.
The city of Hamburg sold  the property to the investor Hanzevast, which planned to tear down two of the buildings. On 22/23 August 2009 a group of artists and activists announced a “courtyard-party” and occupied the buildings with the goal of restoring them and establishing a self-managed, social, and creative neighborhood.
In December 2009 the cultural producers celebrated the city's repurchase of the property for € 2,8 million as a step towards victory.
In September 2011 the city of Hamburg and the Gängeviertel concluded an agreement on renovation and future use of the buildings.
In 2013 the estimated renovation costs are €20 million.