It's a lot of work writing a good blog post. Now especially that I'm writing a book. If I have a snarky comment or some thing to pass on, I thought, why not Tumbl it? Well, despite that I have only a vague idea how Tumbling works, I've gone and done it. Now there's an Occuprop Tumblr. It's at: http://www.tumblr.com/blog/awm13579, yes, that's here.
Posted by Alan W. Moore at 2:40 AM 4 comments:

"Made Possible by Squatting" Opens in London 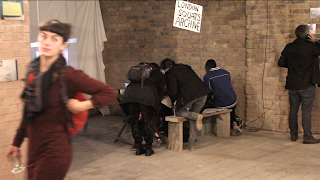 Jaime Idea writes: "Hello! I'm in London taking part in the Made Possible By Squatting exhibition. It's amazing! The Guardian just wrote about the show and I wanted to pass it along. http://www.theguardian.com/news/blog/2013/sep/10/squatting-exhibition-outlawed-but-still-relevant the map linked at the bottom of the article is the project I have been working on with Edward and Eric Brelsford and can also be found here: londonsquatsarchive.org
Posted by Alan W. Moore at 1:13 AM No comments: 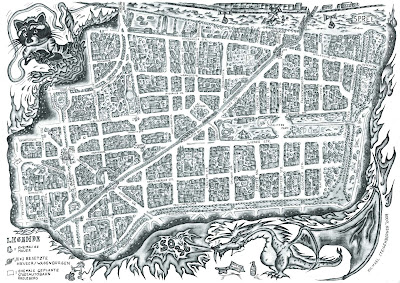 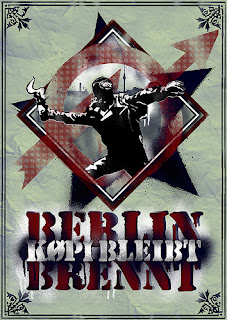 I loaded up with stuff for the Brooklyn-based Interference Archive. One flyer I nabbed read “We Stay United,” the Wagenplatzes stay, and also Koepi. They have bought the whole city. Koepi is still ours! Not for Fucking Sale! Another taught “guerrilla backpack messaging” (figure it out!), a zine about forest occupations, and a few with transgender messages. The comic character “Trouble-X” finds hirmself queried in gendered bathroom, then, finally, appreciated – “I never made out with anyone like you. Don't you wanna kiss me?” “NO. I don't want to be consumed...”
Happily, despite the German government's determined hardcore repression of all new squats, the culture the movement generated persists, living off the deeply rooted naturist spirit of German youth. A character map of Kreuzberg I bought called “Kiezplan” features a sniffiing dog, a running cat, and a curious rat. The banner outside the Koepi read something like “We don't want your yuppie flats/ We are happy with our rats.” Equal partners in occupation? An eviction of the Koepi, the largest remaining public social center squat in Berlin, would mean open street war with the remnants of the squatting movement and young people from all over the region. That and the local politicians Kreuzberg has elected mean there is some chance they can continue their long-term ragtag occupation, and their partying ways. Since the cleanout of the accomodationist art squat Kunsthaus Tacheles late last year, Koepi is about all there is left. Ringed by Bauwagen encampments and strong fences, it would be tough to evict without a small army.
Still, very nearby the Koepi are now apartments with private elevators for tenants' luxury cars, an excess pioneered in NYC's Chelsea district, not long ago the stomping ground of meat market tranny streetwalkers. So.... we'll see.