Imminent! SqEK Conference in Barcelona May 20-24

This big annual event, the meeting of our research network, is rushing right up. Funded by the Antipode Foundation, a relative of the geography magazine, the conference concerns: "Squatting Houses, Social Centres and Workplaces: A Workshop on Self-Managed Alternatives." (website: sqekbcn.squat.net/sqek-meeting) At the reception May 20th, we'll be premiering the new anthology, Making Room: Cultural Production in Occupied Spaces [PDF link TK].
The conference is still open to participants, pretty much up to the last minute -- although funds for travel are gone, and accomodations may be scarce. But, after all, it's squatters, so a way can always be found, if you feel hardy! Our groupuscule is making an exhibition, for which we continue to solicit posters and display panels explaining autonomous projects. Please give the "call for materials" pasted below a look -- e-files need to come now, but the show will go on to New York, USA, in September, so there's still lots of time to send stuff in to what we hope will be a big suitcase lots of people will get to see. 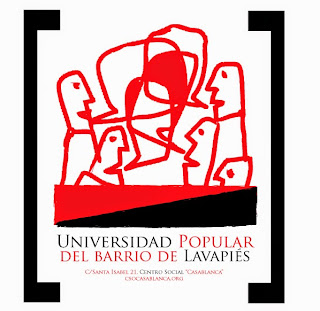 We meet in Barcelona, not Lavapies, Madrid -- but BCN has scads of "ateneos" from the long-lived anarchist movement

The call for materials is pasted on the bottom of this blog post. The table of contents of Making Room also. I continue here with what I call the "pimp text," the draft promotional text for the book which is being distributed by the venerable Journal of Aesthetics & Protest (joaap.org).
Making Room: Cultural Production in Occupied Spaces is a first of its kind -- an anthology of voices from the post-1968 squatting movement in Europe which is focused on creative production and cultural innovation. Is squatting art? It is certainly a tactic which has enabled a tremendous body of collective work in culture to be done, and new kinds of lives to be lived. Making Room lays it out in the words of those who did it and study it.
The dark matter undercommons of disobedient culture surveyed in this book begins its roam in a theoretical introduction including autonomist theory, the ways of "monster institutions" and simple economic justice. Then it moves from north to south, portraying by country the specific local conditions of an international movement. 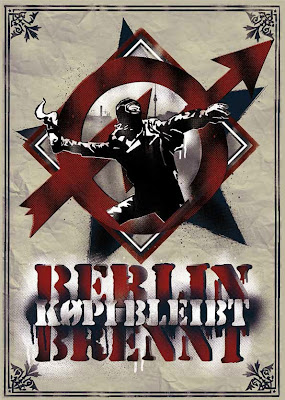 In the Netherlannds, we visit the strongholds of the hippies, the festive "temporary autonomous zones," and the rough-and-tumble conflicts of the Amsterdam squatters who once had that city in their hands. Later squatters were artists, forging international connections, and facing up to government recuperation and a new capitalist stratagem to hold them down.
A cultural manifesto and timeline of the venerable Christiania kicks off the section on Denmark. Then texts roll on to the war of the punks to save their youth house, and the "candy factories" of today's artists. 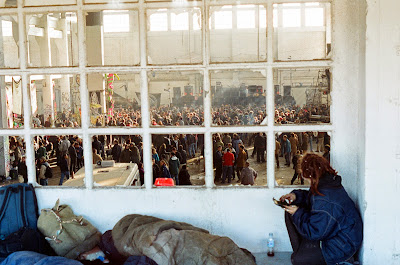 The last 30 years of squatting in London is surveyed, the flaming boil on the resistant body of the United Kingdom, as well as a close look at the deeply weird communes and squats of underground art cults.
The famously crusty German movement is examined in detail, from its beginnings and imbrications in violent resistance in Berlin, to its house projects and collective workplaces -- its "rainbow factories," "red islands," and Queeruptions. Mural artists who directly support this political movement are surveyed, as well as a series of close brushes with high institutional art culture, and the most recent hipster-squatter alliance in Hamburg.
Italy is the wellspring of the social center idea, which is expertly surveyed in terms of its results -- its places, not only its theories. The legendary street media movement is explained, and the new resistant occupations of precarious cultural workers in Rome and Milan are discussed by participants.
Paris, as we might expect, has developed a cultural policy to integrate the "art squatters" into a new form of bohemia, a house brand of French culture. This institutional recognition is explained, as well as its resistance, the legacy of Situationist positions. One text covers the very strange underground occupations, and another closely portrays a renowned music venue in the days before its certain eviction. 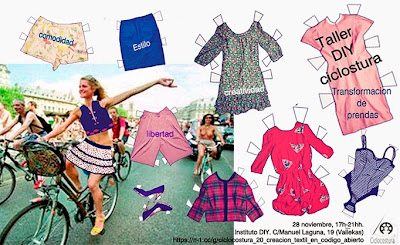 Poster for the cycle fashion workshop, coming out of the Critical Mass bicycle movement

The Spanish movement has been one of the most active in Europe, and here it is examined in its ideological dimension, and in terms of its mediatic images, both negative and self-affirming. The rich cultural production of the movement is examined in a text on "ciclocostura," bicycle based self-fashioning, solidarity research groups with domestic workers, and anti-gentrification campaigns. The struggle of the Casa Invisible to legalize is told by them, as is the story of the wall poem revealed by demolition in Barcelona.
Making Room departs from the national frame in a section called "Everywhere: Transnational Movements, Networks and Continuities." Here authors discuss Puerto Rican occupations in New York City, the uses migrants in Europe make of squatting as well as activists' solidarity in a "universal embassy" occupied in Brussels. The culture of the large Ljubljana squat Metelkova is discussed at length by the programmer of one of its major punk venues.
The book concludes with a group of texts, "Anywhere: Media, Virtuality, and Diffusion." Texts treat of stereotypes of squatters in mainstream media, and the media squatters make themselves -- a steady stream of zines and films, many online. Another author considers the ideology of punk music and the economic networks it has generated. And finally, the book includes a major piece on the development of hacklabs in squatted spaces in Europe, precursors and anti-capitalist runalongs to the rise of the commodified internet. 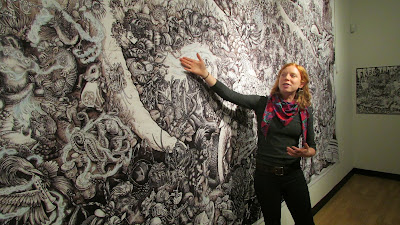 Presentation of the Beehive Collective's pedagogical banner "Mesoamerica Resiste" (photo by Frederick Blichert). One of the "Bees" will be a guest artist in Barcelona.

Nearly all the texts in Making Room could be the germs of books in themselves, so resolutely has the subject been ignored over years by mainstream media, publishers and academia alike. This book is opening a long-locked door on the tremendous untold achievements of the disobedient movements. It's the beginning of a look at worlds created outside of rent, waged labor, and bureaucratic control; a response, in Brian Holmes' words, "the great unanswered question of a society with no imagination."

CALL FOR MATERIALS FOR BARCELONA CONFERENCE
A call for the self-representations of autonomous projects
The SqEK network of researchers and activists meets in Barcelona, Spain, May 20th to 25th. We present there an exhibition of posters and information presentations from and about autonomous spaces, from the squatting, occupation and disobedient movements. This show will go on to the USA in September
We call for posters and presentations to be sent by post (please contact for address), or by digital file so that we can print them out on site. Send to awm13579 [at] gmail.com 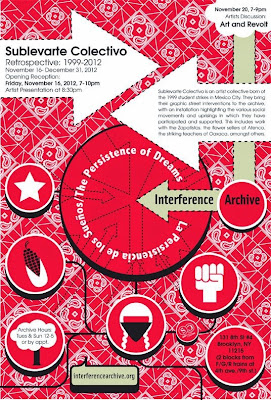 One of the Sublevarte activist art collective, from Mexico DF, will be a guest artist in Barcelona. 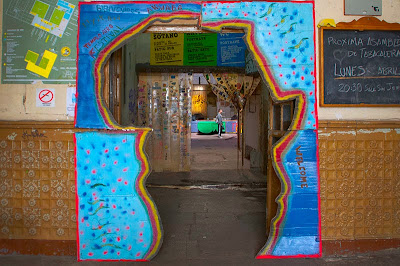 Entranceway to the Festival Afro at Tabacalera, Madrid 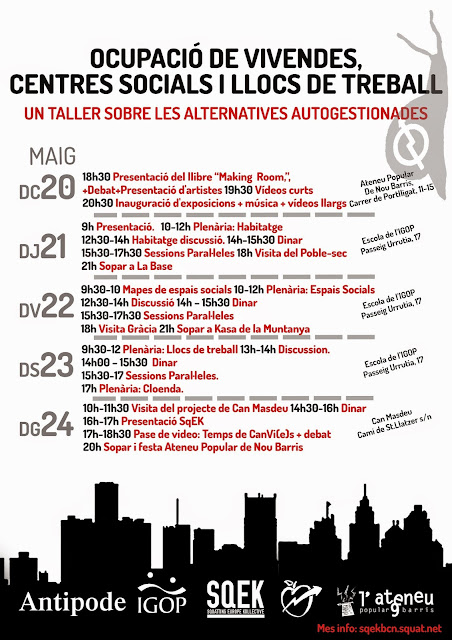