The “art part” of the House Magic zine is the most difficult part to assemble. So many creative people are turning political, there is an extraordinary wealth of materials to choose from. The case study in this issue focusses on the former “art squat” – a classic of the genre – in the ritzy London district of Mayfair in 2008. The “Da collective” did their work with and for artists, which sets them apart from the more recent movement-connected Bank of Ideas occupation, for example. Even so, the Mayfair squat was more traditional. The politicized international artworld – the substantial subset of institutionally supported artists who work in the social sphere – has been preoccupied with Occupy, trying to digest the implications and outcomes of the revolutionary year of 2011, and producing unuusual events in the attempt.

The Mayfair Squatters
A key recent example of a classic art squat was the 2008 action by the “Mayfair squatters.” Inspired by their experiences in Paris, this gang grabbed an empty mansion in London. It was a case of high-profile upscale squatting, the kind that can't be said to encourage gentrification, and the brazenness of it captivated the media.
Graeme Robertson set the scene, writing in The Guardian: “It is one of London's most exclusive addresses. Michelin-starred restaurants are just a block away, the US embassy is around the corner and Hyde Park is at the end of the road. To share the same postcode ought to cost millions. But the new residents of 18 Upper Grosvenor Street, a raggle-taggle of teenagers and artists called the Da! collective, haven't paid a penny for their £6.25m, six-storey townhouse in Mayfair.” Robertson also details the ownership of the building, one “Deltaland Resources Ltd, which is registered in the British Virgin Islands.”
http://www.guardian.co.uk/society/2008/nov/07/mayfair-property-art-squat
The Da! collective named themselves after a sign on the storefront window. They further cemented their media credentials by hosting the kind of fabulous dissolute parties that are a mythical part of the London city image. The Ravish London blog covered the project as “the realisation of an artistic vision, in the creation of a small piece of London Art history.”
http://www.ravishlondon.com/dacollective/index.html#mada
Sometime later, after their eviction, the leaders of the squat talked to Tallulah Berry of Libertine Magazine.
http://www.libertine-magazine.com/home/2010/11/21/the-founders-of-da-collective/
In this talk, they say they had met at, and been inspired by “Chez Robert” – that is the 59 Rivoli squat in Paris, squatted ca. 2000, and legalized today as studio space.
That history is told at: http://www.59rivoli.org/main.html

Showing Occupy
Next, “House Magic” takes a look at the “Occupy Bay Area” exhibition at the Yerba Buena Center for the Arts in San Francisco over the summer of '12. The show included not only posters and photographs from Occupy SF and Oakland, but creative work for earlier political struggles, including the Black Panther Party, the International Hotel in Manilatown (1968–77); the ARC/AIDS Vigil at City Hall (1985–95); the Occupation of Alcatraz (1969–71); the Free Speech Movement at UC Berkeley (1964–65); and the San Francisco State University protests to gain programs in ethnic studies (1968–69).
http://www.ybca.org/occupy-bay-area

Occupy Meetings
There have been two prominent efforts this year to integrate elements of the global Occupy movements and art institutions. The Berlin Biennale’s 7th edition in the spring, and “Truth Is Concrete,” this year's version of the Steirischer Herbst in Graz, Austria, both took on the challenge of displaying (in the first case) and hosting (in the second) key movement participants. The Graz conference, “Truth Is Concrete,” was partially streamed, and now is archived. That event was much better funded than the Occupy part of BB7, and differently conceived. From all accounts, BB7 was a collision of activist and artistic cultures. TIC attempted a synthesis, but it was curated, a congress of invitees with an audience.

Berlin Biennale, Spring 2012
The 7th edition of the Berlin Biennale took place from April 27 to July 1 of 2012. This large exhibition engaged numerous specific political themes directly. It was curated by Polish political artist Artur Żmijewski together with Joanna Warsza and the Voina art collective of St. Petersburg as associate curators. (The Voina group, named from the Russian Война, or War, included Pussy Riot members, and is known for confrontational street actions.)
Artists' works in the BB7 had titles like “how would you like to die?,” “Germany gets rid of it,” and “Happy New Fear,” and projects like a giant “key of return” sculpture and a passport for Palestine, a “Club of Political Critique” in Kiev and Berlin, a “Self #Governing” newspaper for Belarus, a report on German arms trading and the Mexican drug wars, an “alternative parliament” for organizations labelled terrorist, and a program of solidarity actions between BB7 and other art institutions.
Among these were events in Rome produced by the Swiss Institute with activists from the LUM (Libera Università Metropolitana), which sprang up in the ESC occupation in Rome (including Claudia Bernardi, whose interview on this subject is included in this issue of “House Magic”). They wrote: “we found commonalities between the political collective ESC – Autonomous Atelier in Rome and the Polish group Krytyka Polityczna. We are supporting collaborative actions between them and Swiss political activists, especially those involved in the Occupy movement, as part of our 'Solidarity Action'.” This event may have been the most direct contact with an occupied social center and a cultural institution during this phase of art activity. (Jeudi Noir was invited and featured in Graz as well.) Another solidarity project was “Rebranding European Muslims,” produced by an Israel-based group at the Steirischer Herbst – (that's “Styrian Autumn,” Styria being southern Austria, formerly part of Slovenia) – which event is considered below.

The Berlin Biennale 7 generated a raft of texts including a newspaper and a book. The show was most notable for giving over the largest exhibition space to activists from the 15M movement in Spain and Occupy Wall Street in the U.S. (mostly New York City). “House Magic” reprints some of the online texts, including the joint declaration of the “Indignadxs|Occupy” at the start of the BB7, parts of letters from Spanish, German and U.S. activists, and, finally, a set of instructions of “How to Build Up Horizontality.” These address a central concern of BB7 curator Artur Żmijewski. Because of the conflict and discontent in the cultural community around the development of Berlin, Żmijewski wanted the BB7 to be the place to draft “a new social contract” between artists, art workers, and politicians.

The BB7 represented some serious political initiatives within the artworld. Nevertheless, the critical reception by the art press and many other artists was unsympathetic. A review published on the blog of Afterall, a joint publication of the Cal Arts (Los Angeles) and Goldsmiths (London) art schools, was a partial defense. Even so, the writer called curator Żmijewski's open call for proposals a “lame and populist tactic.” The Indignadxs|Occupy encampment was void of “political force,” since they were “sanctioned” in a gallery and taking public money. Żmijewski also sinned by including his own work in the show, indeed of making the show into his own “Gesamtkunstwerk” (total artwork). Visitors were annoyed at having to interact with people on the site – at “the unavailability of a well-oiled viewing machine.” She reflects on the ultra-ironic artistic strategies derived from Laibach – “which takes the system more seriously than it takes itself.” Finally, though, this reviewer realizes that with “the invitation to the Occupy Movement and the Indignados, with their artful resistance to appearing decisive or united, to take up residence” in the BB7 is part of a biennial that “leaves much room for working out what else art can do today” besides offer itself within a viewing machine.

“Truth Is Concrete,” this year's Steirischer Herbst, in Graz, Austria, September 2012
The art annual Steirischer Herbst produced a “24/7 marathon camp” called “Truth Is Concrete” for one week in late September. Around 200 artists, activists, and theorists were invited to “lecture, perform, play, produce, discuss, and collect artistic strategies in politics and political strategies in art. All day long, all night long. It is a platform, a toolbox, as well as a performative statement—an extreme effort at a time that needs some extreme efforts.” “Truth Is Concrete” was styled like a camp, after Tahrir Square or Occupy Wall Street.
What made BB7 interesting was the clash of cultures between the artworld and the democratic social movements, and the efforts of grassroots internal reform of an artworld system fatally entrained to the fast-moving invisible flows of global capital. The conference in Graz was more interesting in terms of content. The panel descriptions and the archived Livestreams are fascinating. But, in a sense, it was more normal. It was a conference, an expanded seminar with a novel form imitative of a protest camp or squatter convergence.
Gavin Grindon reported on the convergence – “not an exhibition but a cultural festival” – in his blog post “Protest Camps and White Cubes” at protestcamps.org. While the producers made a live-in camp, they invited and subsidized the participants, which is different from “groups willfully collaborating for their own strategic reasons.” Grindon criticized the frustration born of days of lecture presentations with inadequate time to discuss. The Graz TIC meetings seemed to borrow from, and expand upon, the format of Creative Time's Summit series, an annual large-audience event with international presenters giving brief talks. The records of both of these events – the “Truth Is Concrete” conference and the Creative Time Summit – offer a great resource for understanding the strong current of social and political work by artists today.
At this point, “House Magic” #5 is bulging, and it's not clear how much of this can go into the print edition. (There's more, besides, especially architecture...) Nor have I sifted the online conference materials thoroughly for squat-related, building occupation content. (Then there's the books!) It's a symptom of just how big this whole thing is getting. While it's hard to report, I'm happy to see it's far and away out of control.

Gavin Grindon, “Protest Camps and White Cubes” at:
http://protestcamps.org/2 012/09/28/793/
(Protestcamps.org is an excellent blog, coordinated by Anna Feigenbaum, which revolves around the camp formation, not only recently but in the past; there is, for example, a recent consideration of attacks on the Greenham Common women's peace camp in UK during the 1980s.) 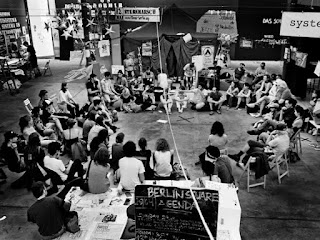 Texts, commentary, and Livestreams of many of the talks – the tactic talks, particularly – are archived at:
http://www.truthisconcrete.org/livestream/videos.php

The Creative Time Summit is a conference “exploring the intersection of art-making and social justice,” a forum for “for the expanding global network of people who believe in the power of artists to make real social change.” Presentations at the four summits – “Confronting Inequity,” 2012; “Living as Form,” 2011; “Revolutions in Public Practice 2,” 2010; and “Revolutions in Public Practice 1,” 2009 – are online at:
http://creativetime.org/summit/presentations/