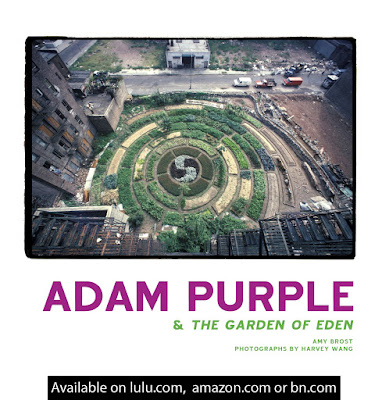 Photo: Cover of Harvey Wang's book on Adam Purple, with a brilliant essay on his work
I'm on the move again – leaving Milwaukee to New York City, and thence to Rotterdam for the convergence of SqEK, the squatting Europe research group. It promises to be exciting, with many new friends and comrades coming to the meeting. I'll be bringing along the new House Magic zine of squatting and occupation culture. It's #7 – the 2015 issue, really, since we missed one because of the books Occupation Culture and Making Room.
It's a good issue, however. Designed by Other Forms' Jack Henrie Fisher and packed with interesting content.
The cover is a photo of the NYC squatter-gardener Adam Purple taken by his friend Harvey Wang. Inside, there's:
“Adam Purple, Grandfather of Sustainable Urbanism and the Greening of New York City,” by Benjamin Heim Shepard – the Lower East Side squatter, radical ecologist, and influential garden designer is mourned by his community
“Telling Squatting History in New York City,” by Amy Starecheski – museal and memory initiatives by NYC squatter artists
“Squatters of Rome,” by Alan W. Moore – an account of the SqEK group's 2014 conference in Rome, including visits to numerous squats and social centers, discussions and events. (Revised blog post from “Occupations & Properties,” July 2014.)
Alan Dearling, “Christiania: 5th Free Cultural Spaces Symposium” – a longtime writer on free festivals, travelers and things communal
‟Our Autonomous Life?” by Binna Choi, Maiko Tanaka – a soap opera based on research on squatters' lives produced with CASCO Projects in Utrecht
Squatting Europe Kollective Meeting in Barcelona, May 2015 – remarks by conference attendees, transcribed from video
Sophia Rehmus, “Social Benefits: A Rural Squat in Northern Spain” – a visit to a squatted village in northern Catalunya
“The Adventure of Knowledge” an interview with Raúl Sánchez Cedillo – Cedillo discusses the Fundación de los Comunes and the Universidad Nómada, two intellectual formations which have supported squatted social centers in Spain
Huw Nexbitt, “The Rise and Fall and Rise of the Art Squat” – the recent history of art-based squatting in the Peckham district of London is reviewed
Paul Case, “Talk: A Critique of Squatted Social Centres”
Colectivo Sublevarte, Timeline of Squatting in Mexico City
“John Trudell Walks On,” by Alex Jacobs – Recollection of the life of Native American poet and activist John Trudell, a prominent occupier of Alcatraz Island

The PDF of this new issue is not yet online... but it soon will be, and the URL will be posted here when it is. You can look for it in the usual place when it comes out, and meanwhile catch up on the last 6 issues you might have missed!