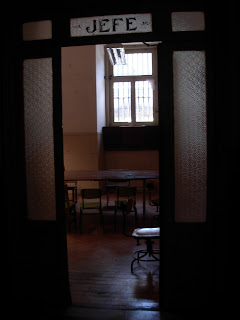 I had heard about La Tabacalera as soon as I arrived last week, but only yesterday did I get around to see it. I wandered through the decrepit halls of this new artists' project located in an immense former tobacco factory in a kind of disbelief. This emerging cultural utopia is right off the busy traffic roundel at Plaza de Embajadores, near a cluster of university buildings, and only a few blocks from La Casa Encendida, a large well-funded cultural center with a fine exhibition series, films screenings, workshops for young people, etc.
La Tabacalera has been given over to artists temporarily by the Ministry of Culture. I don't have the whole story yet – and given my lack of Spanish, may never have it... But La Tabacalera appears to be a kind of outgrowth of the work of Patio Maravillas, the occupied social center evicted last year only to reappear in a building on Calle de Pez owned by a bankrupt firm.
The Tabacalera is a building with a very interesting history, for labor and “capital,” built in the late 18th century as a royal manufactory of liquor and playing cards, then tobacco and snuff. Now it is to be a “CSA,” a self-organized social center – but not an “okupa,” occupation, but a legitimated short-term use. From the organizers' own account, an invitation from the Ministry to put up a photo show in the place turned into a proposal to organize a self-managed social center in the very multicultural and historically poor neighborhood of Lavapiés. After long wrangling, this was accepted – for a while.
The plans as announced are incredibly ambitious. Dozens of projects, ateliers, theaters, studios have been launched. All activities will fall under “copyleft” common license; they will be collaborative and cooperative, and ecologically sustainable. The Tabacalera is “self-organizing” – meaning that the administrative functions will be discharged in assembly, a regular open meeting, just as in a social center. This is horizontal rather than vertical administration.Symbolically, the assembly meets in the former office of the factory boss (“jefe”).
The Tabacalera outcome has a tortuous history, which may be seen to have begun at a conference at the Museum Reina Sofia in February of last year considering the case of the occupied Patio Maravillas. The talk was titled “Art of the Crisis.” The shadowy Spain-wide cabal of academics called Universidad Nómada produced a text at the time. Then in May of '10 Observatorio Metropolitano, a multi-disciplinary group which published a fat book on Madrid as a global city, organized a meeting to consider “economic crisis, social crisis and new political scenarios.” In particular, they wanted to talk about “the different possibilities of re-appropriation of common resources against the urban model of governance.” When eggheads get serious about activism, some different things become possible.
The building now sports a coat of arms with two dogs, a flute and the motto “quien la propone se la come” (“who proposes eats”). But already this is disfigured with graffiti – “vendidas” (sell outs), indicating that there are many who do not accept this line of action. (The legitimation question, extensively discussed at the SQEK conference by Miguel Martinez, is a divisive one among occuupied social centers and squats.)
The space is only on loan – Cinderella will have to fold her dresses on February 2011. Then a hard-line vertical governance may step back in to a building renovated by the free labor of dreamy-eyed volunteers. There are many things to be said from a skeptical point of view... Still, it seems promising. It is an outgrowth of very well coordinated and intelligent pressure by partisans of OSCs rather than the kind of clumsy appropriation of activist strategies by government and private firms that has been seen in Copenhagen.
I hope to find out more. There is a dance this Friday, concluding Patio Maravillas' third annual festival of resistance, “ Crítica Urbana.” As Times Up Bill always says, “you gotta have tunes.”

a lot of work to do – “architects of necessity”
http://blogs.latabacalera.net/autoconstruccion/2010/07/01/la-tabacalera-patologias/

(Casa Encendida is showing now a splendid assemblage of artists' publications culled worldwide and installed in a library-like atmosphere as part of “Inéditos 2010.” )
Posted by Alan W. Moore at 4:59 AM