15h Anniversary of Reclaim the Streets Celebrated by European Union 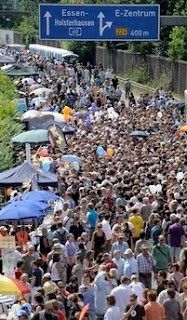 I may have to retitle this blog "Flexible Governance." I am diggin' this, as are a million Germans... [Reblog from Associated Press/Yahoo] "People gather, to celebrate `` Still-Life '' People gather on the Autobahn in Essen, western Germany, to celebrate 'Still-Life' on Sunday, July 18, 2010. The most-travelled motorway in Germany A40 is closed for one day on 60 kilometers for the most spectacular event of the European Cultural Capital Ruhr 2010, when 20,000 tables are set as the longest banquet of the world. About one million visitors and inhabitants of the Ruhr agglomeration area meet, eat and drink together on a Sunday between the cities of Dortmund and Duisburg in Germany's most populated region." (AP Photo/Martin Meissner)
Now, as crisis government shrinks, civic creativity is being outsourced... So take the next step! DePave Summer 2010!