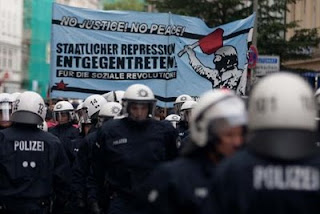 I went with my Hamburg guide to a demonstration against police repression. The rallying point was a tourist center, near the famous immigrant embarkation point – ah, yes, here it is on the cover of the Eyewitness English guidebook, the Landungsbruecken. It's made from thick, rusticated masonry and features nicely expressionistic glowering statues. As a fine art sculptor Ernst Barlach does not thrill me, but this style in architectural ornament is a gas – like a Hollywood monster movie. A couple of dour looking statues near the top of one building looked exactly like the intimidating policemen who were marshalling beneath...
The march was part of a series of events considering state repression around the 9th anniversary of the police murder of Carlo Giuliani. He was killed in Genoa, during protests against the G8 meeting. The symbol of this campaign was the surveillance camera. The discussions, organized at a place in Hamburg called Centro Sociale, considered a repression which is “versatile, comprehensive and subtle.” But the repression in evidence at the event on Saturday certainly wasn't subtle.
The demo marshalled slowly – at first a speaker with some 20 or 30 around a truck, and then the crowd appeared. There were many – the paper estimated 1,000 – and they marched along the Hafenstrasser, waterfront road near the harbor. There were, said a speaker, just as many police present. It was pretty frightening, i must say -- to see all the German police with their body armor and helmets, also tanks and armored vehicles parked above the parade route. Mostly it was young people in black clothes, and many punks, but also mixed in older people marching, marching along the street with the police following in a line...
From the overpasses, tourists were watching – they had been blocked from coming down into the assembly point, where tickets to attractions are sold. People also watched from the balconies of hotels and luxury apartments. The punks were chanting -- all in German, I didn't understand any of that.
Also along the so way some of the formerly squatted houses – now they are all legal, low-rent apartment houses – had put out banners in support. One house, with the motto “Out of Control” painted on it, put on a display of loud fireworks from their roof. Sometimes these marches, which end at the Rote Flora occupied social center, conclude with a riot. This follows on, I was told, from a police provocation, a charge on the crowd or such. Then the young men react. On May 1st they demolished a bank with cobblestones. It seems almost necessary for that to happen, from the state's point of view. If you call out 500 or 1000 police onto the street, even bring them from other parts of Germany (there was a troop here from Berlin, one person said), then you have to justify the expense somehow. So there is a riot; you must make one happen so the repression has "value."
We left the "parade" before the end, where the riots sometimes happen. But the newspaper reports no riot, all was peaceful. This confirms one observer's guess – now, with the political situation uncertain, the CDU right wing party would not risk provoking the (anemic) left Greens by beating up on people of the left. If they do, there could be no coalition, and new elections would be called.

Lost in Repression? Control Yourself!
details of the campaign, in German
http://nella-faccia.de.vu/
propaganda here:
http://lostinrepression.blogsport.de/

and a very impressive ad spot for the Pirate Party, which spells out the problem in English, German and Spanish: called "spot of the Pirate Party"
http://www.youtube.com/watch?v=3vsR-
WF0nLQ
Posted by Alan W. Moore at 5:21 AM