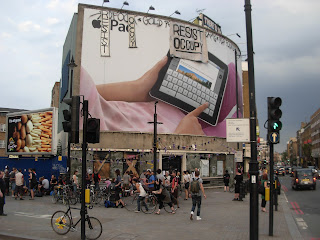 Now we are so many particles in motion... I am in Madrid, early July. It is very hot. So much has been going on since my last post! In late May I went with Matt Metzgar and Carla Cubit to talk about political squatting at the exemplary anarchist Wooden Shoe bookstore in Philadelphia. Matt organized the New York City Squatter Archives, part of which is now at the Tamiment Library, NYU, and Carla is an artist, a maker of brilliant assemblage works, who lived in the Lower East Side squats in the 1990s. Alan Smart, who is working on Provo, came along. We all stayed the night at the luxurious Basekamp, courtesy of Scott Rigby. I packed up the “House Magic: Bureau of Foreign Correspondence” show which had been there to take it back to New York.
At the roundtable at Wooden Shoe a number of Philly squatters turned out to talk over their issues. A “cloud” of crusty punks sat on the street out front of the bookstore, entering only occasionally to use the toilets. At one point, a speaker said he thought there were thousands of squatters in Philadelphia. But there is no network, no organization at all. Traditional housing activist groups do not support them. (The Kensington Welfare Rights Union squatted a number of buildings for the poor in the 1980s, achieved some of their housing objectives, and backed away from the tactic.) There is, in effect, no movement – but there is a lot of action!
Although it was not possible, I would have liked to go to Detroit in June. The Allied Media Conference there was soon followed by the U.S. Social Forum. Many friends were there – part of A New World From Below: An Anarchist and Antiauthoritarian Convergence. I haven't had time to track the blogs, but now that I cruise 'em, I see Nicolas Lampert has done a great series of reports on the Just Seeds artists' collective blog. And the gang from Area Chicago have dedicated a bloggish zone to the conference. So there is a lot of reading to catch up on, as well as the main left news outlets reporting on events like the conversation between Grace Lee Boggs and Immanuel Wallerstein.
Instead I went to London for the Squatting Europe Research Collective meeting (SQEK). This was an intimate gathering of people squeezed into a tiny little building called LARC (London Action Resource Centre). For five days these researcher/activists shared plans and papers, analytic frameworks, stories and camaraderie on squatting as a social movement. This experience has really super-charged my understanding of the subject and questions around it. A week later I am still typing up the notes, and there will be much to come about this here and on the House Magic website as I scope the Madrid scene and move on to Hamburg.
London is big, and I stayed with friends in Deptford, a good way from Whitechapel. I skipped the party in Hackney, and the visits to OSCs like Ratstar and Infoshop 56A. But we did all meet to support the Foundry eviction resistance. Here is a photo of the doomed building in Shoreditch...