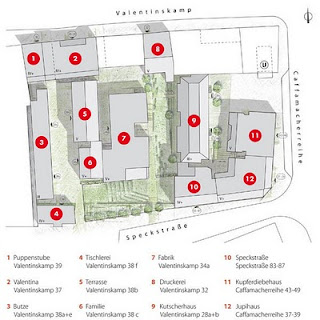 After the intensity of the Tabacalera's beginnings in Madrid, I bounced through Berlin to Hamburg. Now I am staying in a schoolroom a few blocks from the spectacularly busy port on the Elbe River. My hosts Sabine and Michel led me on a tour of the major historical sites during my first day, and I am afraid it passed in a blur. The next day Sabine showed me more, including the famous Gängeviertel occupation in center city.
That first day we had a drink on a terrace at a historic Bauhaus-constructed school building overlooking the Elbe. (I don't know the name of it.) The school has been vacant for 10 years, and only now some artists have permission to open a small cafe with exhibitions inside. Upon walking into the elegant modernist classic the first thing that struck me was the extraordinary flow of air through the building. It was coming from the terrace and rolling through the rooms, freshening the interior on a very hot day. This school is to be torn down to build a high-rise building, luxury apartments with views. There has been talk of occupying it to forestall this destruction.
Then we walked along the Elbe riverfront. Sabine pointed out a trendy bar that had been a squat only a year or so ago. Many giant luxury buildings have been built along the waterfront, ;like a wall obscuring the view of many others. Despite these monster, the walkway along the water remains a public access. We walked through tables filled with diners at one point.
Then Park Fiction hove into view. This is a park designed with multiple S-curved lawns to resemble a flying carpet, and tall metal palm trees, and it is full of people, chatting, drinking, strumming guitars. The park in St. Pauli neighborhood is the outcome of a 15 year long struggle to reclaim public space from top-down development plans of the Hamburg government. Park Fiction was a participatory planning exercise led by artists. They organized the process as a game, and collected an “archive of desires.” After the group was invited to present at the prestigious art fair Documenta, the city started to deal with them more seriously. The outcome finally was that the city withdrew its intentions for another giant high-rise, and today there is the park. (The Park Fiction group is in the thick of engaged artistic practice worldwide; of that more later.) Next to the park is the Golden Pudel Klub, the original squatter's bar with a political music scene which does a booming business – about which I am told they are ambivalent. Park Fictioneers remain very active, working with a new group called “It's Raining Caviar.”
We met Michel at a bar on Haffenstrasse, the harbor street where Autonomen squatters staged pitched battles with police to defend their squats in the 1980s. (Eddie Yuen, et al. eds., book “The Battle of Seattle” has a chapter on this.) Today it is calmed, and we walked on to Rote Flora, which remains an resistant occupied social center in a standoff with the city. We arrived at the antique theater which is the focus of a nightlife area thronged with young folks. A bassy disco was in progress, but a woman there showed us inside, and took us to the silkscreen atelier in the back. It is here that the beautiful monthly schedules are produced to be posted on the street. (Some of these are in the House Magic exhibition, since Michel had brought them to NYC.) Michel told me that during the winter the silkscreen workshop is the warmest room in the place, so the bands sit there between shows! Rote Flora houses a social movements archive which I hope to visit.
The next day, Sabine took me by the vast abandoned department store that is slated to become an Ikea (a Swedish furniture giant). This was occupied in protest and then evicted. We ended up at Gängeviertel, a recently squatted cluster of late 19th century buildings, survivors of wartime bombing, that adjoins the center city with its massive skyscrapers. The place is a relatively recent occupation, and it faces the stark skyscrapers of the Springer publishing company in a contrast that could not be starker. The artists turned it into an overnight warren of studios and ateliers (see diagram above). The surprising thing about this occupation is that they are talking with the city, which has been almost amiable! (The article from Der Spiegel below lays out the situation quite well.)
After this intensive introduction to the Hamburg scene, and a lot of biking and getting lost, I spent this day in bed, studying. Now I am going to hear some music... and probably get lost again! But for the “House Magic” project, it is clear to me that Hamburg is the place to be.

Christoph Schaefer's 2008 lecture at MIT is online; at about 27 minutes he talks about the Parkl Fiction project
http://techtv.mit.edu/videos/4174

“Squatters Take on the Creative Class: Who Has the Right to Shape the City?”
By Philipp Oehmke (translated from German)
http://www.spiegel.de/international/germany/0,1518,670600,00.html
Posted by Alan W. Moore at 9:24 AM