Picture the Homeless Getting Busy 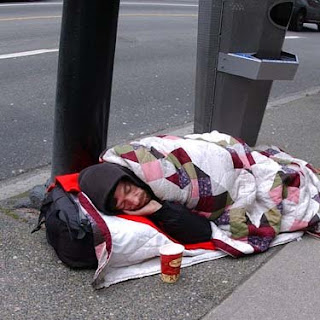 I'm prepping like mad for this show April 17, and far behind -- but I must mention this action. Last week an organized group of homeless activists took over a building in East Harlem, aka "Spanish Harlem." (It was covered in the Spanish language press.) These guys learned their chops from people in Miami, at Take Back the Land. One of the key groups involved is called Picture the Homeless, which for ten years has been very active and inventive in their activist work. It's about housing, not social center style occupation. I am looking forward to conversations in Baltimore this weekend, to learn more about it!

Photo: A homeless man, with his cup for change, sleeps on the street in downtown Vancouver (Steve Bosch/Vancouver Sun) -- it's not New York, but I loved the handmade quilt.
Posted by Alan W. Moore at 7:57 AM