The City From Below: “Hello” 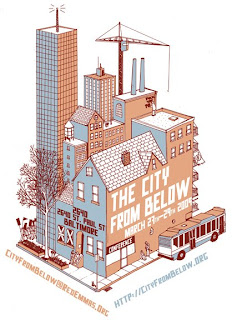 Baltimore is a charming city. It is of a type deemed obsolete during the modernist era -- a European style walking city. Yet because the city’s been depressed for so long, they haven’t had the money to destroy that charm.
The City From Below conference was held in an old Methodist church, a grand basilica with stained glass and a light-filled community room behind. The church was crumbling, its congregation unable to support the place. Two years ago they invited in the crowd of radicals around Red Emma’s bookstore who have helped maintain the building in exchange for using it for special events. Now they run the front, and installed a bar and kitchen. The diminished congregation meets every Sunday in the back. That the Methodist ruling body (synod?) would go along with this rather than seek to sell off the handsome old building is good, but I found it surprising. Perhaps they had no other options. I saw another old church in town that had been converted into an office complex, yet was still entirely vacant. (On perusing the church’s history page, I see that it is in itself a radical congregation with a transgendered minister, so maybe the Methodist bigwigs don’t have so much to say about it!) Red Emma’s crew doesn’t own the place. Cash poor, but rich in energy, labor, faith and vision -- Baltimore’s radicals are the best contemporary users of this great religious assembly hall. They have and will accomplish much there. It seems like a model arrangement. It’s also a libertarian’s dream, the return of social and cultural services to “faith-based” hands.
The conference was very exciting, and filled with interesting and unusual presentations. It had the substance of an academic symposium without its stultifying rituals, constraints, and necessary uselessness. It had the networking intensity of a neighborhood organizing conference, as indeed it was, hosted as well by Baltimore’s United Workers Association, which is building their April campaign behind t-shirts and posters with the stern and striking visage of Harriet Tubman, the slave-freeing heroine of the 19th century Underground Railroad.
One could follow any of a number of threads in the sessions, and when the videos are mounted to the web, we’ll be able to follow up on the others. (Some are on the UWA site already.) I followed my friends, through the egghead theory and cultural work panels. In the opening plenary and a later speakout session, I caught a good invigorating dose of the community organizing strain. The keynote speech was a recording by Mumia Abu Jamal, the long-jailed black journalist. Several of the sessions were animated by the prospect of direct action squatting by the recently dispossessed on foreclosed properties and vacant lands. A strong thread of permaculture and urban farming packed in the clear-eyed crusties and would-be hayseeds, like one gal wearing a vintage fox pelt as a hat.
It was the braiding together of these strains that made the conference so exciting. If there is in fact a grassroots revolution in the making, a true insurrectionary urban development, this is what it might look like. This was its planning meeting.
[The image is by Icky, of Justseeds.org, which did posters for the City From Below.]
Posted by Alan W. Moore at 9:03 PM