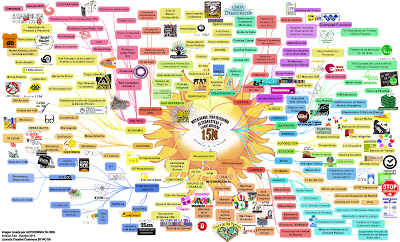 Preliminary theoretical excursus:
In a review of recent books on the Anthropocene, Benjamin Kunkel writes: “No collective actor can be conjured from a name, and the literature of the Anthropocene so far fails to identify any historical process that might combine with moral exhortation to produce a borderless social movement in which human beings throughout the world effect their ecological solidarity as a political force.” Who could this “collective actor” be? A Comintern? An NGO? (Greenpeace is pretty good.) Apparently, a decentred movement is not good enough. Is it disingenuous to believe in a leaderless global movement?
Not according to Amador Fernández-Savater. Rather than thinking like 1919, he emphasizes the "everyday places of experience" we each inhabit within the present planet-destroying processes of hyper capitalism. “Neoliberalism is in fact a co-production." This is not a personal responsibility one small step argument. For Fernández-Savater it's another stage of politics, a part in a "multilayered and multichanneled revolution." The change we want to see follows “'a strategy without strategists'. No one directs it according to a plan, they are practices that multiply and spread by imprinting, via intensification, a new global direction to reality, effects 'without an author'.” 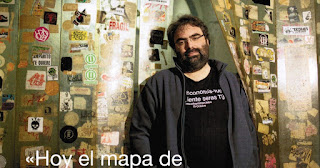 Amador Fernández-Savater; standing before what looks like a plastic ribbon divider at CSA Tabacalera

Still, there is that anxiety, like that behind Kunkel's text. That same anxiety had me carrying a small UN flag during one of the first marches in NYC after 9/11. I strongly felt this now weird-seeming delusion that a conclave of nationalistically self-interested monkeys would somehow put in the fix, and restrain the enraged gorilla. Ha.
The municipalist idea runs against the grain of statist anxiety. That is the fear that localist movements will destabilize the nation state, and with it the global order. It is why the Catalan independence ruckus has unnerved so many. There are good reasons to try to cut free of stifling federalist regimes entrained to the neoliberal order. And indeed there are translocal municipal movements, networking more and more each day, which are dedicated to the radical participation of citizens — or simply inhabitants, regardless of legal status. The activists of municipalism argue that the global challenges of corporate and state domination depend on “local anchors” that can be contested. (I paraphrase Romy Krämer's report on the June '17 “Fearless Cities” meet in Barcelona which I attended and blogged here.)

How? Listen....
As is clear from the above, to do effective political work now it is important to change habits of mind, habits that bind us to older formations, which like waterlogged wreckage from the totalizing shipwreck we are in the middle of, are dragging us down into the suffocating deeps of nowhere.
Changing habits of mind, finding the new place from which to move politically, begins with listening to what others have to say, to what they feel is important. It probably means listening to those with whom you disagree, including those you don't even want to hear. Listening is a skill refined by the political audio art sound collective Ultra-red. They have published on this: “Some theses on militant sound investigation, or, listening for a change” (2008).
Here it is certain that the most careful political work being done on intersubjectivities is by feminists. The agenda of the feminist meetings at MAC 3 are described in this text on “Municipalisms, economies and feminism” – they are all plural. We are many and all different.

Ultra-red, "What is the Sound of Freedom?" at the Whitney Museum NYC in 2012

Back to the Meetings
The journalism group met at the headquarters of Marea Atlantica. It's a lovely modernist glass-cube building overlooking the Plaza of Humor – which is exactly what it sounds. We looked down from the second floor meeting room on a concrete plaza inscribed with cartoon characters, historical caricatures, and the like. The plaza features comical bronze busts, and two granite benches with carved figures of Galicia's most famous caricaturists sprawled on them.
A mini-bookshop was set up in the lobby, with books and DVDs. I noted many familiar authors: four volumes of Emanuel Wallenstein's treatise on world systems, essays by Rosa Luxembourg, works by David Harvey, bell hooks, Angela Davis, Silvia Federici, Yanis Varoufakis – and DVDs of the Yes Men, the French TAV occupation, the Danish “youth house” squat Ungdomshuset, one on the Sanfermines of 1978, a violent police riot in Pamplona during the transition period, etc.
Locations, libraries and artworks I can describe. With the conference talks I get only the gist of it. Basically the meet was was concerned with the communications efforts made in support of the municipalist candidatures and platforms. 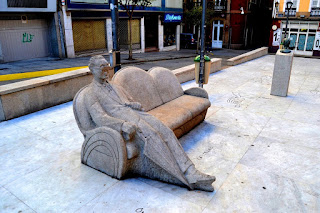 Media workers in several cities spoke of their experiences and perceptions.The moderator was from El Salto periodical. Issues of the magazine covered the book table, and this successor to the periodical Diagonal was a frequent reference in the talks. It is the Spanish left media, especially for this movement. The question concerned precisely media strategy for the short, medium and long term. Elections are coming up in 2019, and several of the municipalist platforms have experienced big lossses. They have many enemies – not onlyt he right wing, which pounces on every mistake the munis make (and being young, ideological, and inexperienced in electoral politics they make many), and generalize them as characteristic of the movement itself. (One young elected's anti-clerical call for an end to public subsidies for the centuries-old religious processions in one city is a classic example, and provided the right with dirt for a year.) But the munis also face opposition from the PSOE (socialists, i.e. liberals) and IU (united left), potential allies. They are all competing for votes, and the state resources that come with them.
The moderator was from El Salto – I recalled him from another Instituto DM meeting recently in San Fernando de Henares, where the town is confronting the imminent opening of an enormous garbage dump (a macrovertedero). He described the workshop as a continuation of the work from MAK 2, in Pamplona. “We are a diverse group, from places big and small, and all looking forward to the 2019 elections.”
The audience was about 30, but swelled in time to 40. Not all were journalists – many were interested political activists. Ana from Madrid described her group as volunteers, sort of autonomous, basically promoting positive things about Ahora Madrid, doing publicity and defending them when they are attacked. They also do “electoral marketing.” This kind of media unit seems almost quaint compared to the phalanxes of 'high-powered media consultants' in the USA, the technicians who engineer our elections.
Hector of Sevilla described the problem of being “invisibilized” by large media groups. “We use humor in short videos,” he said, emulating the U.S. Yes Men. (Their strategy is imposture of government and corporate spokespeople.) These videos make fun of the false statements of politicians and newspapers. They rely on alternative media like Diagonal, and now El Salto for information.
Sante of Ahora Málaga, the home of the Casa Invisible social center, reported that the PP right-wing mayor is “adored.” They try then to point to the many incidents of corruption and conflicts of interest. The turistification of the city and the expulsion of residents from social housing is an enormous problem in Málaga, even more than in Barcelona. The tenants have mounted a strong campaign. Ahora Málaga prints a paper which lampoons the format of another. Many experts, architects and such, want to write for them. A man from Pamplona in Basque country where the party Bildu is in control reported that they started a blog with various lines of work. They try to articulate positions and start “communicative structures.”
A Barcelona man spoke of their use of social media. Twitter, Facebook, memes on WhatsApp – “we experiment a lot.” Their enemies, of course, have more money, and use the micro-targeting techniques on social media which were so successful in the Trump campaign. They are also experimenting with “deliberative platforms” – the subject of technopolitics will be discussed in tomorrow's meeting. (As I wrote, HackFest 2017 was underway in La Ingobernable social center in Madrid [#Hackmeeting17], and Medialab Prado is getting ready for a weeks-long vetted workshop on exactly this kind of citizen participation platforms.) With these platforms, he said, citizens can create counter-power, and engage in citizen journalism.
After a coffee break, one man laid out statistics on media viewership so – where people get their information – so that we may understand “the machine that confronts us.” A woman from Santander, where the munis are very much in the minority, said they rely on concrete actions like discussions and book talks as tools of mobilization in a kind of cultural intellectual campaign.
Another man quoted revered Galician experimental writer Valle-Inclan, and said it was better to experiment and risk failure than simply to lament the lack of money to implement conventional strategies. The Basque man regretted the lack of self-esteem in the discussion. “We have done well so far.” Sante said early mistakes, like nominating our friends for electoral office, and stupid statements, provided fuel for enemies, and will haunt the movement well into the future.

Next: Technopolitics and Social Centers

Ultra-red, “Some theses on militant sound investigation, or, listening for a change,” 2008
https://inthemiddleofthewhirlwind.wordpress.com/some-theses-on-militant-sound-investigationor-listening-for-a-change/