"Take back the economy" -- The Plan as per the Hidra collective (posted at http://lahidra.net/nociones-comunes-barcelona/)

Before look at the first full day of MAC3, I must confess I was confused. How can a meeting of political party operatives and elected officials be about “counter-power”? Aren't they in power, and supposed to be figuring out how to use it? Aren't the people out of power, the activists, squatters, general masses of the unwashed beating at the gates and yelling at them to do something? Aren't the folks in government always telling activists, Well, it's complex, you don't understand how things work, we can't do what you want now, I have to go to lunch now with important people, etc.... Are you also confused?
In a March '17 interview, Pablo Carmona of the Ganemos Madrid list author of The Municipalist Wager, and a key theorist of the movement explained. The concepts may seem hard for USAians to grasp...

Interviewer: It is not always clear what municipalism is....

Pablo Carmona: ...Municipalism has a strong libertarian matrix, it does not think of conquering power to change things, but to change things, power has to be elsewhere. Its objective is to disperse power and to challenge the existing institutional mechanism....

According to Pablo, “the wave of institutional participation that is opening up in many parts of the country largely has the mission of dissolving or de-structuring the Spanish power system” which is entrenched in precisely these institutional arrangements.
That is to say, everything is not all right. The constitutional order of 1978 is “damaged.” (Imagine the state of the 1789 product!) As the 15M movement of 2011 moved forward, they found it was “a good time to rearm the old tool of Libertarian Municipalism.” 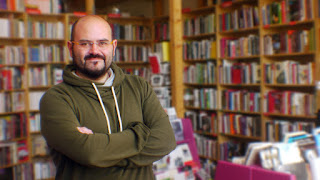 The social movements (that's like the PAH, the squatted social centers, feminists, sin papeles, ecologists, etc.) are incapable of dissolving the institutional structure and building a new one – i.e., of effecting a revolutionary transition that would have the character of a union, not of labor but of the social itself. So they decided to enter politics on the municipal level, We wanted to “deprivatize politics and launch it into society.”
“That is why we attach such great importance to linking institutional participation and the movements, which linkage has not been collaborative. Many times that [idea] is not understood. 'How, if you are part of the movements, do you always say that the movements have to be a counter-power?' Because we understand that the relationship, even when we have talked about that idea of a party-movement, has to be an antagonistic relationship. That is, it would be a mistake to fall back into the [habits of] social democratic Europe, where many social movements or organized civil society are subordinated, co-opted or financed under the institutional wing.” That's why they cheerfully participate in critical debates about the city council initiated by the social movements, even when they are against them. “Many of our colleagues see it as a rupture, as a betrayal, but we think it is the diversity necessary for this system of antagonisms and counterpowers not to make the social sphere decapitalize and lose its value and meaning.” That “capital” is the valor and energy of the social movements.
[The above is a tweaked machine translation. The original: “nosotros pensamos que es la diversidad necesaria para que ese sistema de antagonismos y de contrapoderes no haga que el ámbito de lo social se descapitalice y pierda valor y sentido.”]

“To the Tables!”
We arrived for the MAC at a regular civic center. Old people and youngsters drifted about. There's also a library upstairs. We were herded into two rooms with card tables, and seated in small groups. On each table was a pile of cards. I had a nice chat with Leilla of Barcelona en Comú (she's a roommate of Kate Shea Baird, la jefa of BCNenC's international committee). I showed her the Lumpen magazine from Chicago which had my lovely article on the municipalist movement in it. She smiled and nodded her head politely. Then the horror began....
The cards were dealt out. I had a 10 of clubs. Leilla had an ace. It was explained to us what we were to do. I thought it was about coming up with ideas about how to build the movement, from its past, its present, and its future – I wrote my bright ideas on the table... but I was wrong. It was much much more specific. I had just made the clean paper dirty. 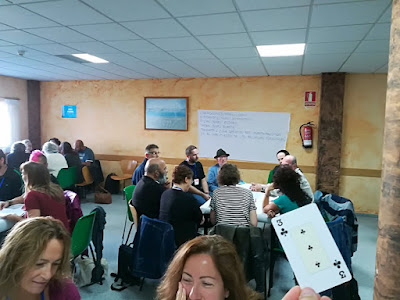 The job was to consider how the municipalist movements could effect change on different levels of governance. The “clubs” had the level of European Union. Discussion began. The EU maintains human rights, but it also oppresses, sell weapons, and maintains borders (“Fortress Europe”). A principal in the DM Institute began to outline how the rules of the EU on economic policy, laid out in Brussels, control finance, tourism, the real estate market, and create limits to municipalism. He rattled rapidly on, interminably, uninterruptibly... I was soon swamped, and couldn't get a thing from his talk. We shuffled again, and this time I drew a 2. That was more appropriate!, since I was by now swamped and sinking. Another guy from Marea Atlantica said something about markets. Water was washing over the bow. Finally we were to write the key points of our talk onto the paper covering the table.
I was not the only person not talking. At our table were two women of color. They were from Territorio Domestico, an activist group working with domestic and care workers. Many of these are migrants, and some undocumented. They also seemed lost in the blizzard of talk, but at least they understood the language! At length, one of them spoke about the importance of the stories of individual lives. 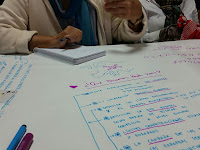 After the first intensive discussion and the summary written out by Lilliana of Barcelona en Comu, we were moved to another table and dealt a new hand of cards from a different suit, i.e., . We then launched into a short discussion of the written textual consideration that we saw the previous group had left on the table. We wrote a response. There followed another move, short discussion, another response. We were ordered then to move into the adjacent room, where another large group at several tables were doing the same thing. I shouldn't say “we,” because at some point along the way I staggered from the room....
Although it blew my fuses, it really was a great game!, a wonderful way of getting everyone thinking strategically. In they end, they have a lot of raw material for a strategic document or a manifesto – fodder to chew on for future meetings. The document that came out of the MAC1 in 2016, while it was called a manifesto, was a text that “brings together several lines of discussion that emerged in the workshops and working spaces” of MAC1.

///////////////
Many tweets came from this extended card game exercise – e.g.,
We are remixed again to discuss the 2nd question: achievements and challenges of the municipalist movement. We are still at the top in # Mac3...

Curiously in the MAC1 statement there is a strong emphasis on migrant rights. The sin papeles, or sans papiers, the undocumented, are severely disadvantaged throughout Europe, whether they be refugees or economic migrants. While there is no Joe Arpaio or Jeff Sessions' DOJ hunting them down, they can be detained and deported, and are regularly fined for trying to work or sell things. MAC3 did not have much discussion of the issues of the undocumented. Mainly I'll guess this is because they are super-poor, working all the time as they can, and even if funded can't travel on airplanes which have ID checks. 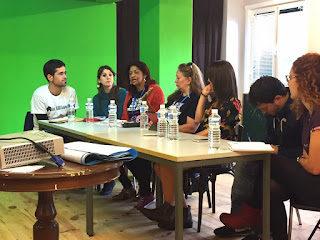 Territorio Domestico in a small session at MAC3

I sat in the lobby at the kids' table and typed up some notes, looked at tweets. I was feeling pretty low, facing a three hour lunch break with no one to talk to. Along came Alejandra from Medialab Prado in Madrid. She had helped with the Lumpen article, and she is is actually bilingual. We chatted, and then she also was off. On my cel, Malena said, “Go enjoy A Coruña. It's a beautiful city.” With I did. Wandering into the Museo de Bellas Artes, which is a mortuarial place full of bad art of the ages. I was not much cheered up.
Still, I could go back to the apartment, lunch with my host at a crowded tapas bar, take a nap and still make the session on journalism in the afternoon.


NEXT: Journalism, propaganda, and online voting

Lumpen magazine from Chicago which has my lovely article on the municipalism, called “How to Do”
http://www.lumpenmagazine.org/how-to-do-now/

Link is to a short video of a 2010 demonstration organized by Territorio Domestico in Lavapies, Madrid. "Without us the world doesn't move." The prop being pushed was part of an exhibition, 'Principio Potosi" at the Reina Sofia museum https://www.youtube.com/watch?v=KUTW6clGcRM 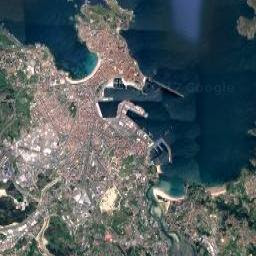 A Coruna from above