I have returned to Madrid from the city of A Coruña in the north of Spain, where the MAC3 conference was held – “Municipalism, Self-Government and Counterpower” was the title. It was essentially a party congress of municipalist platforms in Spain. I think I was the only native English speaker there (except for the bilingual Kate Shea Baird, the major spokes for Barcelona en comu's international committee, who passed me regally yet again; I've still never met her.) I was for sure the only U.S.A.ian. 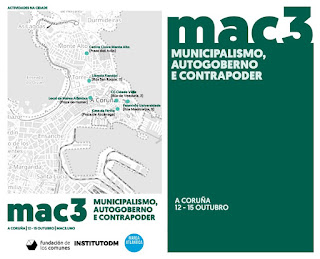 I preface with an apologia – unlike Kate, I am far from bilingual. My comprehension of Spanish (which is actually Castilian) spoken fast and subtly is about 20-40%. But I'm pretty well prepped on the municipalist movement, and I've spent a decade researching “counterpower” in the form of squatting in Europe. My whole life has been an infatuation with mischief culture, on both small and grand scales. “Heretical,” yes. With a PhD. (Sigh.)
The MAC3 conference this time was hosted by Marea Atlántica, a party, er, platform or coalition which came to power in 2015 in the city of A Coruña in the autonomous community of Galicia, Spain. (Thank goodness few sessions were in Galego; the language of the Galician region is close to Portuguese.) 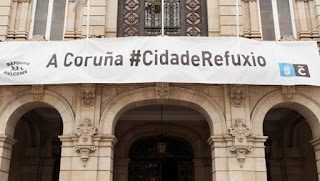 The first MAC in 2015 was in Málaga in Andalusia in the south. The city has its own municipalist platform, Málaga Ahora, and is the home of one of the coolest occupied social centers in Europe, La Casa Invisible. (I say "cool" 'cause their five minute “lipdub” music video of a few years ago brings tears of joy to my eyes.) La Casa Invisible is a key seat of the Fundación de los Comunes – the Foundation of the Commons – which has several sites in Spain and was one of the organizers of this conference.
Texts around this first MAC1 conference were posted in several languages on the EIPCP Transversal web-zine site as a special issue entitled "Monster Municipalism." (This was an echo of the earlier “Monster Institutions” issue devoted to occupied social centers in Europe – maybe the picture is beginning to form up now, eh? This blog has been only about squatting for years.)
The second MAC – (or “MAK,” because they speak Euskara there) – was held in the Basque city of Pamplona, famous for the running of the bulls that enchanted Hemingway. It's a country of squats, analyzed in a recently defended PhD thesis by Sheila Padrones Gil. Thanks to an energetic media group, Pamplonauta Iruñea, numerous short videos of MAK2 participants were posted to YouTube (search the makers and #MakDos; Spanish only).
I had to go to this MAC – even knowing I would be blankly uncomprehending much of the time. I had to go because increasingly I feel that organized localism is our ONLY HOPE for getting out of the dead-end planet-destroying sitch we're living. Especially in the godforsaken USA which is on fire and sinking down. “Believe it if you need it” – the nation state – “if you don't, just pass it by”! (That's “Box of Rain” – yes, this political system “is all a dream we dreamed / One afternoon long ago”.)
I fulminate at length on this in the new issue of Chicago's Lumpen magazine in an essay called “How to Do Now” (another song title). The issue contains numerous other essays and proposals. The deepest one for sure is that from Jackson Rising in Mississippi. They've just published a book – Jackson Rising: The Struggle for Economic Democracy and Self-Determination. JR comes out of the Malcolm X Grassroots Movement; their chief exponent was a lawyer for the Black Panthers. 'Nuff said!
It drives me absolutely nuts that activists in the USA don't immediately pick up this stick and get on with the business. Assemble! And push your local governments to disobey!

Okay, the setup is enough for today. Tomorrow the reports begin.....

tweet by Asad Haider, an editor at Viewpoint – viewpointmag.com – expresses the guts of the municipalist organizing strategy:
“Thought of a crazy idea:
1. Go to working-class neighborhood
2. Knock on doors
3. Ask people what they need instead of telling them
stop this shit right now!


As a footnote I have to praise a book I haven't read yet – Michael Hardt and Toni Negri's new book called simply Assembly. (It's the first in Oxford University's “Heretical Thought” line of books; viva Galileo.) Assembly is the basis of municipalist politics. On the sound file below is an hour of Michael Hardt in London talking about the book. He advocates "tactical leadership, which is deployed and then dismissed." With the assembly model – (that is 15M, Occupy Wall Street, new municipalist platforms, etc.) – everyone else in the movement needs to take responsibility, step up and make mistakes. What resources do people have for democratic decision-making? The capacities which people have for cooperation overlap with their ability to self-govern. We need to reclaim "entrepreneur." When neoliberals say "entrepreneur," "they mean they're no longer going to give you any money" for social services, and you have to make do on your own. You have to do it on your own. (At one point, Hardt says, we wanted to call the book “Enterprise” with an image from Star Trek.) Salvation from above?, like Syriza or Podemos, or the U.S. DSA? "There is no left government... What there is is a government that can give space to the left." For example, Barcelona en comu, which tries to give space to the movements.
https://soundcloud.com/search?q=%23NovaraFM%3A%20Michael%20Hardt%20-%20Assembly 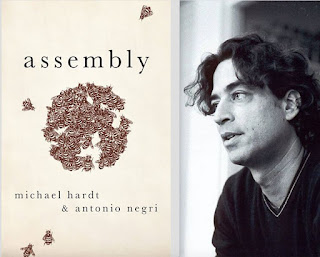 My two books on squatting, both free PDFs online, can be found at:
http://occupationculture.net/

“How to Do Now” – proposals for municipalism in U.S.A.
http://www.lumpenmagazine.org/how-to-do-now/

Jackson Rising: The Struggle for Economic Democracy and Self-Determination in Jackson, Mississippi
http://www.cooperationjackson.org/announcementsblog/2016/8/9/jackson-rising-the-struggle-for-economic-democracy-and-self-determination-in-jackson-mississippi 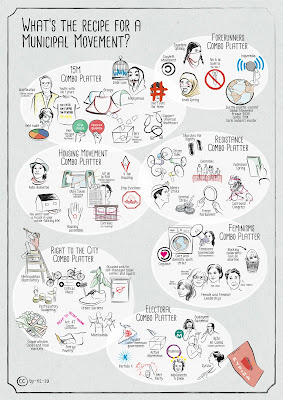