This is a long read (4000+ words), the second of two talks I gave in March, 2017 in Minneapolis to a group interested in the Spanish municipalist movement. We're hoping to do more on this question and strategies in the U.S.A. come warm weather... No normalization! Not one step back!

The affective dimension – This is what we artists and art historians are better at.
I only squatted twice in my life – and, to be precise, it was occupying, not squatting. The subsistence level of my life was not involved. The motive in both cases was political.
Still I remember both occasions very well, even though they were very brief, only hours long.
The experience of collective disobedience, of stepping outside the frame of the legal, the permitted, the allowed, of violating norms and expectations is indelible. Intoxicating. Unforgettable.
Where does it lead? It is always impossible to tell for sure. Transgression is experiment.
A massive political and social experiment lies behind the contemporary political movement in Spain called “municipalismo,” or municipalism. That experiment was 15M, the long-term encampment of the central plaza of Madrid, the capital of Spain, by activists and citizens collectively called “indignados” – the indignant ones. 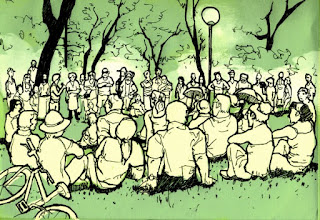 The occupation of the Puerta del Sol plaza took place in 2011 during a time period right before federal elections, when electioneering rallies are forbidden. The “indignados” were not electioneering. They were there to say that both parties, both the right and the left – “No nos representan”: they don't represent us.
Both political parties had caved to, or played along with a brutal austerity program enforced by the European Union. This shredded the social safety net, and led to double digit unemployment, especially among the young.
The surprise of the 15M encampment would change politics in Spain. But first it changed the people involved.
Luis Moreno Caballud, a scholar of classical Hispanic literature teaching at U Penn, was a participant in the 15M camp. He writes in his book Cultures of Anyone what this felt like.
(I paraphrase, interpolate and quote indiscriminately now from his epilogue) –
The movement of 15M was inclusive and hospitable. It sought to construct common spaces, spaces of encounter. The “indignados” were trying to change the way that citizens thought about representational democracy -- to interrogate its pretexts, and its pretensions, which are not true – and especially the conviction that capitalism is the only system possible.
In his epilogue, Caballud wishes he had written a different book, one which proposed tools for the democratic development of a common story, like the encounters and conversations he saw in the Puerta del Sol.
He laments the progressive erasure of forms of sociability that do not conform to the capitalist productivism we call ‘modernity.’ He observes the persistence of collective inferiority complexes among those whose ways of life don't matter under first the modern, and now the contemporary, say post-modern, cycle of domination. These cycles never repeat exactly, but tend to have the same result – precarity, immiseration, destruction of communities.
Then, quoting a number of authors, Caballud observes that the experience of the occupation, of daily life in the camp, this kind of voluntary temporary collective exile, built a “network experience a bit like LSD in the ’60s: a different, unreal but real experience that stays in your memory because you have actually experienced what you have experienced: the ability to converse with strangers, to cross borders, to self-transform, to easily create... In the plazas of the 15M, that experience [was] explored with an overwhelming passion. With much uncertainty, too, because it’s not clear where you’re going... [There was a] very strong impression of being cast adrift, so many different people in the same boat. The feeling that we could drown, that it could fall at any time, not because of the police but because of ourselves. Every day in [the Puerta del] Sol was a conquest, everything depended on us.”
This was not only a ‘political empowerment,’ but also an ‘expressive empowerment,’ which
Posted by Alan W. Moore at 4:27 AM