Revival of Anarchist Art in Spain

It's been some years since I attended a show and talk in Madrid put on by the youth section of the Spanish anarchist union, CNT in the arts faculty of a public university. This production of the Juventudes Libertarias (libertarian youth) was disappointing – yellowing reproductions of 1930s anarchist posters, a long talk by a published anarchist author about a Chilean pamphlet “against art and artists”, and a circle of bored head-scratching grafiteros sitting around, clearly more from duty than interest. “Anarchist art” seemed to be pretty much stuck in the past, with wheels spinning quite slowly.
I sat there for two days with materials I'd brought from the USA – posters and publications of political art that even today remains largely unseen in Europe. My display was ignored. The only interest in this work came from two sociology students from another campus. After that I pretty much wrote off anarchist culture in Madrid.

But I was wrong. Time have changed! The JACA 2017 (for Jornadas de Arte y Creatividad Anarquistas), presented at various spaces in April in Madrid, was an exponentially more developed program. I missed nearly everything since I've been away from Spain for a while. But I did catch a discussion about an important rolling initiative aimed at building a counter-institutional sphere of art practice.
Three organizers from Valencia spoke at the JACA segment held in the ESLA Eko occupied social center. They had just concluded a presentation called “AnArco: liberal art vs. libertarian art.” in conjunction with the Anarchist Book Fair in Valencia. That program included pieces by dozens of artists and collaborating groups, nearly all doing work in political social practice, performance, video, and traditional media.
Upstairs in ESLA Eko, JACA organizers had put up some of this – large forceful black and white photocopies pieced and pasted on the wall, piles of scattered stickers, hanging screens, video monitors, a built masonry wall, a giant tree trunk pencil in a carriage, as well as conventional artworks. A full program of discussions, music and theater took place at the other JACA locations. I looked in briefly on one, a large group of older people recalling the years-long film festival now defunct hosted in Carabanchel, the barrio wherein ESLA Eko is situated.
The Valencia presentations came out of an earlier project in the Madrid barrio of Vallekas at a place called ABM confecciones. That was called “Art and libertarian propaganda” in a nod to the prevailing conception of anarchist art, that is as a poster art in service of social movements. This tradition continues strong in the USA, notably with the propaganda work of Interference Archive, the Art & Revolution project, and the recent highly productive “art builds” undertaken in San Francisco, Milwaukee, Chicago and New York to make materials for demonstrations. 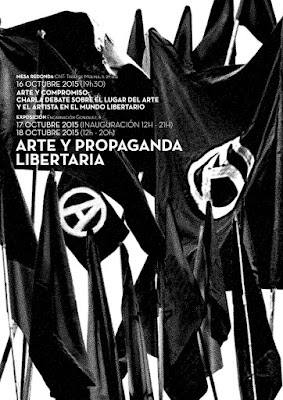 The shows are only part of this rolling initiative. The guts of it are the continuous discussions around what an anarchist art, a libertarian art might mean, what it can be. The project and the shows are open to participation, and their terms are hashed out in many meetings of many different assemblies. This is never without conflict, for sue, since artists and anarchists both love to argue. “We are caught between the monsters of art and libertarianism,” one of the Valencian organizers told us at Eko.
What struck my quite conventional antennae of course was the participation of Santiago Sierra in the JACA show. Probably the best known Spanish political artist, he was there alongside the Democracia collaborative, whose publication work I've seen dropped here and there in non-art venues. (They showed part of their 'opera,' “Dinner at the Dorchester.”) But this was full-throated participation in an art show in a squatted space. Conventionally, that should be a big deal, rather as if Marcel Duchamp had put a piece into your little show in a bookshop in Paris in the '30s. But come to think of it, that would probably have also been unremarked at the time. As it surely will be this time. After all, the Rubells don't collect Sierra, do they? That's why they call it avant garde, well ahead of the pack.
Sierra put in a serious piece, one of his “Monuments to Civil Disobedience” dedicated to the venue itself, ESLA Eko. The works of this series come out as editions. Perhaps I should buy one, since the Rubells won't. Eko, of course, is still around, unlike the Spanish Republic Sierra's work has eulogized. And it is indeed a remarkable place, and its own monument. It's part of the world being built under our noses as most eyes are averted to the tiny screens we love so well. 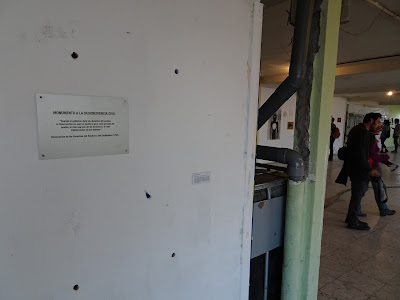 I perused the linked list of artists and groups working in the Valencia AnArco project. It's a big fascinating job, and I only began it. One that jumped out at me was a project by Dos Jotas in Madrid called "Institutional Gray". This was their contribution (2015) to an ongoing institutionally sanctioned mural project which is unfolding on the block-long back wall of the Tabacalera self-organized cultural center. Dos Jotas painted the wall gray. Whatever appeared as "volunteer," they painted over, also in a shade of gray. (It's the same procedure as the filmmakers of the 2001 work "The Subconscious Art of Graffiti Removal," although active, not documentary.) It's a great instance of what Stevphen Shukaitis calls a strategy of over-identification with the ongoing repression of street art in Madrid as in most cities.

But I don't know if that work was shown. The JACA and AnArco gangs surely did not have the resources to mount the artists' works in ways that institutions do. Like Alán Carrasco's Geschichtsaufarbeitung (like, "history workup"), a campaign of letters written to Spanish companies that profited from slave labor under the Franco dictatorship asking them what they were doing about that, since German companies with similar histories had conttributed to a fund compensating victims' families.
Dos Jotas and Carrasco are but two from the impressive roster of artists who participated in the ABM show, the AnArco, and/or the JACA events, artists with solid backgrounds of intriguing and provocative political work. Most of these artists' work of course has been done in institutional contexts – schools, museums, art centers – not in places like Eko. Squatted social centers usually have great street art on the walls outside and murals inside, theater, circus, poetry, and music groups and events. But it's never been clear what kind of relation the recent wave of social practice art – or 'social sculpture' to use the old Beuysian term – could or would have to the squatting movement. Would it find a place in these centers with their punky freak-flag-flying alternative positions so zealously maintained?
Now my question is being answered in the best possible manner, by action. And it is gangly, wildly articulated, and unconventional productive action. The Vallekas event was “halfway between a show, a distributor and a place to debate about the anti-authoritarian struggle and the relevance of the alternative” [sphere] (Paris, 2015). The artists and collectives were less “in the show” than in relation, in discussion.
Having stepped out of the institutional sphere for which, and in reaction to which most of their work has been designed, these artists have entered into a practice of composition, in the terms of the Autonomists. Chatting with Marc Herbst about this, he wrote: “composition, first is, figuring out who you are. Becoming self composed (like you know, clearing one's throat before beginning to sing). Politics are an inside-outside tack of growth, so self-composing occurs throughout a process, where the group gathers steam and self-awareness.” In writing this little notice, I am trying to help in this process of composition, even as I also am being composed. I want to help because I want to find myself.

The online reports of these events are all in Spanish. I use Google translate with fair results. The most complete account I've seen so far is:
Enric Llopis as SPMujer, “'AnArco': Arte anarquista frente al arte liberal,” 16 Abril, 2016 at:
http://cgtcantabria.org/wp/archivos/5127
This includes a valuable account of Luis Navarro Monedero's participation, an artist and theorist whose influence is quite important.

The Vallekas show was also covered in the print publication “Todo por Hacer: Publicación Anarquista Mensual,” a monthly Madrid anarchist sheet I have not seen

ABM confecciones is on Facebook; a video shows a hand drawing on the wall: “We don't want to be a gallery.” 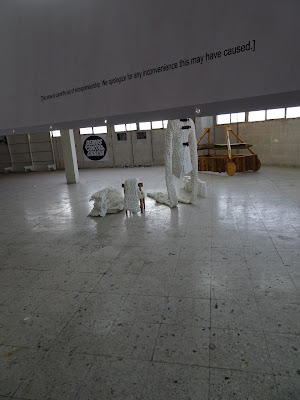 View of JACA show at Eko. Caption: "This show is currently out of entrepreneurship. We apologize for any inconvenience this may have caused."