During my recent book tour for “Occupation Culture,” everyone wanted to talk about gentrification. While it is certainly involved, squatting really isn't about that... At the “Making Room” show at ABC No Rio this past September, however, we hosted a talk by Erick Lyle, whose new book “Streetopia” documents and reflects on an artists' project that got right to the point in San Francisco. My notes are below. 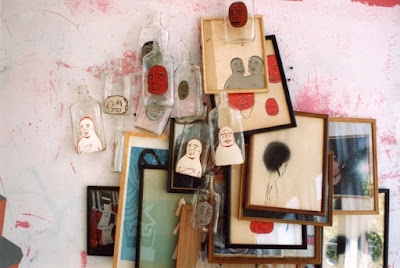 Barry McGee work in the "Outerspace Hillbillys" show at the Luggage Store Gallery in San Francisco
photo from barnabys.blogs.com

That city is changing fast, under the pressure of a massive wave of super well-paid tech workers. Everyone there, if they are not counting their money, is worried. Chris Carlsson, the great San Francisco historian talks about that; and the anarchist writer Cindy Milstein has been reporting the many struggles which have broken out in the street, where increasing numbers of San Franciscans are finding themselves.
The blurb for Erick's new book explains: “After San Francisco’s new mayor announced imminent plans to 'clean up' downtown with a new corporate 'dot com corridor' and arts district–featuring the new headquarters of Twitter and Burning Man— curators Erick Lyle, Chris Johanson, and Kal Spelletich brought over 100 artists and activists together with neighborhood residents fearing displacement to consider utopian aspirations and to plot alternate futures for the city. Opening in May 2012 at the Luggage Store Gallery, the resulting exhibition Streetopia was a massive anti-gentrification art fair that took place in venues throughout the city. For five weeks, Streetopia featured daily free talks, performances, and skillshares while operating a free community kitchen out of the gallery.”
The project took place in the Tenderloin district of San Fancisco. Erick explained that the mayor intends this part of the city "to be a dot com corridor" of tech businesses. The second dot com boom is underway now in SF, "Tech 2.0." The first dot com boom in San Francisco saw a united organizing response which resulted in key legislation. This solidarity has dissipated. “Streetopia” was an opening cry from the artists' community.
The roots of the "Streetopia" project, as it happens, were in a squat -- at 949 Market street during the first dot com boom. After long seasons of demonstrations, Erick said, “We wanted to do something more about what we're for rather than what we're against. We were tired of holding up protest signs at city hall. We wanted a social space where people wouldn't have to spend money.”
Erick has written about this great adventure, a covert occupation and development of an abandoned movie theater, in his book On the Lower Frequencies That book is “a manual, a memoir and a history of creative resistance and fun in a world run rotten with poverty and war.” While Lyle's best known zine venture is called Scam, his book tells of a less well-known photocopied project, The Turd-Filled Donut, which largely concerned the SFPD which was beating down hard on him and his punk pals back in the day.
The Luggage Store Gallery, a 35-year-old project which owns their building, was the partner for the “Streetopia” project. “We were making art projects for the people living there, he said. The artists built a simple structure which combined a bleacher-type seating with a stage. They "funkified" the gallery space. The architect was inspired by the St. Louis city museum, an "unsafe structure" with labyrinths. Although maligned, the Tenderloin district has strong community organizations. The idea of the show was to amplify those. For example, "What if the space of Occupy was normalized and made constant?" For the five week run of the show, there was a free cafe -- inspired by the Diggers; a "healing arts studio," where they practiced tincture making, and led ex-urban herb walks. The idea was to heal the city trauma due to displacement.
Julian Dash did a Holy Stitch project as an afterschool with kids, remaking and selling clothes. There was a stand selling coffee and trees, nurselings in planters. The Drug Users Union which seeks to set up safe injection sites, as exist in the European Union, collaborated with Barry McGee. They mocked up a design for a safe injection booth. Out of this came another group, the Urban Survivors Network.
Sarah Lewison's project was to reactivate a communal news network. The Kaliflower commune network of newsletters claimed to circulate to 300 communes in the Bay Area during the 1970s. All of this was non-monetary. It was not the "sharing economy", but real sharing – "a lost world." Silicon Valley and the gentrifiers have stolen that language from us. For the “Streetopia” artists, real time was important, so they did not photograph everything.
Even so, underground hobo celeb Bill Daniel was artist in residence, making photographs. Bill made the film classic “Who Is Bozo Texino?”. As it happened, he also showed up at ABC No Rio in September as well, touring his vintage photos of punk shows in Texas.
The artists of “Streetopia” did skill shares, for example how to find information about the city's hidden forces. Sarah Schulman came and talked about ACT-UP. A new group is using ACT-UP tactics to shut down banks. Caroline Dins made a project about James Baldwin. He did a PBS documentary, "If I Had a Hammer". Fifty years later, Caroline found the kids from that film, and talked to them about the legacy of neglect of the neighborhood.
In the discussion after Erick's talk, people noted that there has been some community land trust action in SF to preserve art spaces and housing. Sarah Lewison called this settling of younger people "a resuscitation act." With this tech stuff, "it's like the coming of the railroads," a reorganization of urban space on that scale. Today we have "a dialogue of powerlessness," complaining about stuff like gentrification. The tactics used by power to change and degrade communities are not clear. It is like the AIDS crisis, when people were dying and nobody in power was talking about it.
In the Lower East Side, said Fly Orr, we witness the takeover of the community by high level transients -- students and workers who don't plan to be here for very long. She works at the Lower East Side Girls Club where many people come to meet and organize.
I have the book, which include some deep thinking by smart people about the ongoing urban disaster that is wiping out working class and artists' communities around the world. I haven't read it yet. When I do, I'll post more about “Streetopia.” 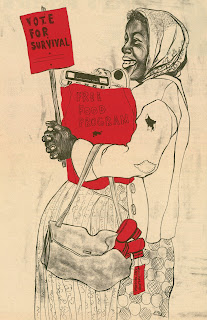 “Streetopia” – Order the book from the artists' collaborative JustSeeds for just $20.
http://justseeds.org/product/streetopia/