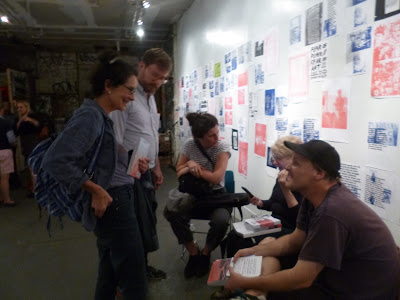 ...back in Milwaukee. Book touring is done for the moment, and I've been trying to take stock of what happened. I'm almost ready to start reporting some of these findings to this blog. As well, more ad hoc autonomous shadow-world publications are marinating in the stewpots of our gang's minds....
Squatting is pretty minoritarian stuff. In the USA in particular, while occupation is a political tactic, squatting isn't understood as a political movement. Indeed, occupations are rarely undertaken for any length of time.
So now, after a few months of sporadic touring, I shouldn't have been surprised that the U.S. reception of the books we have produced -- my own Occupation Culture and the anthology Making Room has been so lukewarm. What these books discuss and I've been talking about it seems is a curiosity of European culture. Folks are maybe thinking it's like lederhosen and paella -- curious, even tasty, but not something we do here in America.
Three years on, Occupy Wall Street seems to be forgotten. If it was, as Michael Gould-Wartofsky writes, manufactured by a dedicated cadre of media activists as a media event, both online and in the mainstream broadcast and print, it seems to have faded as completely as any of last year's celebrity kerfuffles. (That author swung through Milwaukee talking about his book The Occupiers: The Making of the 99 Percent Movement; we swapped books and I'm reading his now.)
The upshot is largely invisible. A generation of lefties with the kind of solidarity forged only in action; a reanimation of activism across the country; and, arguably, Bernie Sanders' focussed and issue-driven campaign today. Some new journals and a slew of books.
But, unlike its progenitor, the 15M movement in Spain (Gould-Wartofsky, like Nathan Schneider, points to the Spanish who were key actors in the OWS in New York), Occupy Wall Street did not succeed anywhere in the country to take any permanent brick-and-mortar positions, like squatted social centers. (The 15M movement led to dozens of sustained occupations all over Europe.) Nor did OWS have any electoral outcome. (Anti-austerity movements Europe-wide have led to some electoral victories; the Podemos party and related initiatives came straight out of the 15M in Spain.)
Now I am back in the foggy pre-winter chill near the banks of the Milwaukee River, far from the bustle of New York City September, and further still from the roiling, exhilirating political terrain of sunny Barcelona in May. Family business will hold me here now for some time, during which I plan to continue processing the data accumulated during the events celebrating the Making Room anthology book release, and the Barcelona conference of SqEK.
Considered objectively, the New York City events series was not a success, if success is measured by the yardsticks of increased attention and monetization. All the events were ignored by print press and media alike. To be sure, not a lot of effort was put into promotion, essential in the hectic New York environment. Still, gallery attendance was scant; some events had to be cancelled for lack of participation; and audiences at all events were pretty small.
On the other hand, discussions were focussed and intense. Several of those I intend to report on this blog in the weeks to come. And if this was not the moment to generate a broader public interest in the histories and potentials of the squatting movement, the people who were interested were very interested. Finally, that's what counts in this kind of thing. Oft cited, sourced to Margaret Mead, it's still true: "Never doubt that a small group of thoughtful, committed citizens can change the world; indeed, it's the only thing that ever has."

LINKS
Occupation Culture: Art & Squatting in the City from Below
by Alan W. Moore
published by Minor Compositions; free PDF online at -- http://www.minorcompositions.info/?p=684

Review of The Occupiers: The Making of the 99 Percent Movement
by Michael A. Gould-Wartofsky
https://www.kirkusreviews.com/book-reviews/michael-gould-wartofsky/the-occupiers/