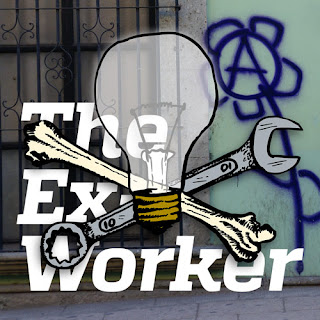 Update: The "Change Everything" tour of international anarchists organized by Crimethinc is now concluded. A report on their travels has been posted on the Crimethinc blog. It is an excellent and stimulating read. (Note: URLs to references and links are at the bottom of this post.)

Last September, a day before the opening of the exhibition connected with our anthology "Making Room: Cultural Production in Occupied Spaces," a group of activists gathered at the MoRUS museum on New York's Lower East Side for a talk about squatted social centers. Some of the activists were traveling with Crimethinc's "Change Everything" tour. Brian of Crimethinc, he of the long dreads who debated Chris Hedges a few years ago on the question of the black bloc in the Occupy movement, is wandering around the edges of the crowd. It's small. The tour, we are told, is part of a global dialogue between anarchists all over the world. The pamphlet text has been translated into many languages. The speakers this night were from the squatting movement in different contexts -- Slovenia, Sweden, Argentina, and Scandinavia. Bim of Stockholm speaks first.
There is not much of a squatting culture in Scandinavia. Tenants' rights there are stronger than in most countries. In early summer Bim was part of a squat in a southern suburb of Stockholm. The suburb had been built around a metro station there. The building they squatted had been sold to a private company pushing gentrification. They planned new construction advertised to higher income people as "15 minutes from the city." Demonstrations and organizing was done against this. This included concerts, free shops, and other events. Finally they took over the building to show that it could be renovated. They expected to be evicted quickly, but they weren't. "So we were surprised to have a building." We had to figure out what to do with it. People came quickly. "They didn't plan to make a social center. It just happened." This showed the need for such a place. The free shop was full of stuff within hours. "Everything sort of happened by itself." This was surprising since Sweden has no history of doing occupations.
The assemblies were long meetings which were exhausting. People were "differently educated," so we began to break out meetings by topic. For us, without the experience of Occupy, this was something new. We didn't promote rules because we wanted to be inclusive. In [Hed-dollen, the town of the squat] there is also a skate park and Cyclopen [another squatting project]. But you can never have too many spaces. The legal spaces would not be in conflict with what was happening in the area. [Stockholm also has a network of suburban art centers, some of which I visited during the Creative Time Summit there in 2014.] We were not just a group of punks. Even for people who were not radical, "we experienced that we could do something." Still, after a month of work, the initial group was burned out.
Ileana of Argentina spoke next. She sought to describe some of the active tensions in the squats she was involved in. In Argentina squattinng is not a political thing. People come continuously to the cities -- (now 90% of the population of Argentina) -- and start building their little shacks. A political movement is not present. People feel they have a right to build their own dwelling. In the year 2000, the financial crisis led to occupations. [The Take movie is about these factory occupations; see link below.] 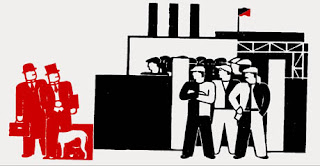 I was involved in two projects in Rosario and in Buenos Aires. One had a number of provisions. The other, in Buenos Aires, was a really big old pizza place taken over by neighbors when it was shut down in 2001. Since then there has been increasing repression and evictions of important spaces. Spaces opened up for a year or more, opening up possibilities, and then closed down again. Ileana was also involved in a squatted house, "living politically together." People there were engaging their "micro-political relations and their decision-making." It was really exhausting. Assemblies in the social center are "a coming together of different bodies." In the house, as versus the social center, that process was very different. We talked about our emotional relationships. We assume that horizontal spaces are going to be horizontal, but they aren't.
Shifting affinities are something to be aware of when talking about horizontality. This goes to the question, What is collectivity? I gave up a lot to live in that house in Buenos Aires. But my whole self does not need to be decided upon by an assembly. This is a subtle thing. There is tension in our relation to the collectivity. Finally, it's a question of how we care for one another.
Ramona from Slovenia spoke next. In that country, she said, the squatting culture emerged in the early 1990s. The Metelkova military base in Llubjana was squatted in 1993. The Rog bicycle factory is another. Ramona comes from the anarchist infoshop in Metelkova. The late 1990s saw a wave of residential squatting. We were allowed to have our infoshop in Metelkova, but we also lived there. Every kind of project is there. [She names them.] The 22nd anniversary was just last week. Gentrification has intensified in the last five to 10 years, and we are now into the third generation of squatters. We ask what role or function we play in this process? Metelkova looks very open and friendly. For young people it is one of the last places in the city they can hang out without consuming. Tour guides promote Metelkova. "We see 10 or 20 cameras every day trying to take a picture of the natives." The city mayor complements Metelkova as a zone of critical thought -- the "ghettoization of critical thought" is imposed upon us.
We ask, what is the role of a radical community which is a part of this squat in the face of gentrification? When creating these spaces we want them to last. But institutionalization makes them more open to cooptation. The state deals with the emergence of resistance in terms of repression. The other way is sending inspectors, and of course we fail all those tests. It's a way to pressure us to legalize. The squat produced cultural value which is capitalized by the state through tourism. While it might be tempting to legalize, why do we fight for autonomy? Metelkova was an expression of deep disagreement with the way the city was developing under capitalism. It is easy to forget this conflict orientation as the space closes and becomes self-sufficient. It is "a tiny island of resistance.... If it doesn't go into conflict with everything else around it, it has no meaning."
Sara from Ljubljana then spoke. There are a quarter million people in the city. Both squats -- [Metelkova and Rog] -- are in the center of the city and they are huge. The origin of Rog is connected with the story of transition from Communist rule. This was more gradual in Slovenia than in other Eastern Bloc countries. But we have been facing increasing precarity and austerity. Rog was a very successful bicycle factory, but it shut down in the 1990s. Different speculations were made on the building. In 2006 it was occupied as a production space by collectives which had prepared the occupation. Metelkova emphasizes alternative culture. Rog emphasizes social production, not only cultural production. Temporary usage was a leading concept. We will leave when the city decides what to do with it, but in the meantime it needs to be used. In a couple of years we realized we were collaborating with gentrification, so we began to think how to develop. We turned into a center of cultural production. 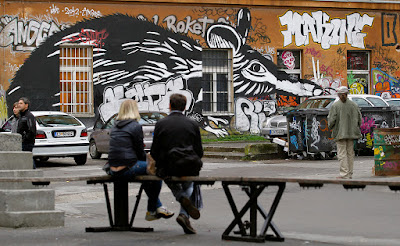 With the Europe-wide economic crisis, the city could not find an investor to develop the space, so we are there 10 years now. In the beginning, it was very nice, with solidarity and so on. Then with the first winter, a huge factory with broken windows and no electricity, it was hard. Many people left. Many collectives began to build their own spaces within the factory. [She names various uses.] After two years the assembly became very hard, then it stopped, and restarted on a new basis. We believe in "non-perfectibility." We are "inclusive, non-hierarchical and non-institutional."
David of Rog: The "social center" within Rog has seen itself as political from the beginning. There have been two broad phases. The first was a campaign-driven collective with clear politics around the "struggle of the erased." This concerns the 25,000 people who lost citizenship during the transition. It's a complex story, but this campaign started in the early '00s and continues. Another campaign concerns the rights of migrant workers. They lost rights with the crisis and were never paid. People were in the social center because of these campaigns. It was also always open to community initiatives. The second phase came with Occupy Slovenia, a five-to-six-month occupation during which many activists became engaged in the Occupy struggle, and went away from the campaigns. The space became more about being collectively organized. A new formation is the Precarious Wasps' Nest of Workers meeting, also the Insurgent Women Social Workers which started in 2013 with a radical approach to social work. The media collective asks what does our space mean for us, and what is its function in the wider society?

The Take is a documentary film by Avi Lewis and Naomi Klein
http://www.thetake.org/
full movie on YouTube at: https://www.youtube.com/watch?v=Sug7bWxTuSo

Metelkova mesto
www.metelkovamesto.org/
Metelkova is an autonomous social centre in the centre of Ljubljana, Slovenia.

Tovarna Rog on official Slovenian culture website
“Opened in 2006 within the 7,000 square-metre former premises of the Rog bicycle factory in downtown Ljubljana”
www.culture.si/en/Tovarna_Rog