I tweeted this today --
1/ The SqEK email list today ceased to exist. This group of squatting researchers and activists, dedicated to producing knowledge useful to the movements, formed in 2009. The "Kollective" -- more a community of researchers -- split in 2019, after a final meeting in Madrid.
2/ We from NYC went to SqEK meets. I wrote of them in "Occupation Culture", and blogged it in "Occupations & Properties". Squatters aren't done, nor are the ceaseless attempts to evict and erase them. For updates on these precious carbuncles of the commons, see https://es.squat.net/.
Alan Willard Moore on Twitter
@joeblowenarbol
also on Mastodon

From its start SqEK was a group of academics. Many of them came from squatting movements, but their intention was to produce academic-quality research that did what social science really always aspires to do -- explain, and through accumulating knowledge, to expand understanding of squatting as a coherent social and subcultural movement. 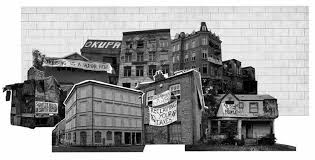 Through that kind of work, consistently marginalized and politicized movements like squatting enter into the calculus of governance as something other than a police problem. Social science is implicitly ameliorative; it is complicit with power

SqEK came apart in a way from its success. After the conclusion of its biggest funded research project, called Movokeur, which saw historical maps of squats in various European cities produced through assiduous assembling research, and its blow-out 2015 conference in Barcelona (funded by Antipode foundation), there were no more big grants. The unfunded activist-organized conferences thereafter were somewhat sparsely attended. (These reprised the form of the 'squatter convergence', which will doubtless continue in future.) 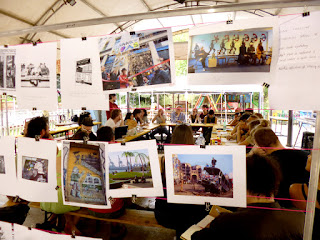 Alan Smart's "book machine" at work at the SqEK meeting in Rome, at the Forte Prenestino

I could not have done my book "Occupation Culture" without SqEK. (That book, and our anthology "Making Room", are free PDFs here.) Most of that book is an account of our meetings, most of them revised from this over 10-year-old blog. As the reader may have gathered, this writer is not done with squatting, nor are many of the researchers and activists once affiliated with the SqEK group. How we will meet, network and collaborate in future years is what is now up in the air.
In any event, SqEK produced an impressive body of work over its 10 years of existence. The group also laid down a marker on the responsibility of academics to return their work on marginal resistant communities back to those people to help them better conceive and execute their work against the grain of capitalist property-based society. Although never explicitly stated in its communiques, SqEK was a group of militant researchers.

By the way -- this blog remains open to contributors on the themes of squatting and occupation. Even to promote your recent article or book with a small blurb. Contact me at awm13579 [at] gmail [dot] com if you are interested.
Adelante!