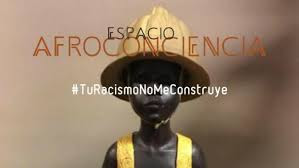 The first day proper of the MAC 4 conference of municipalists in Madrid dawned plenty hot. I decided to attend the panel on anti-racism, freedom of movement: organizing alliances and politics for a city without borders. A tall order, to be sure... This meeting was held in a tent, poorly indicated on the conference map. How I long for those hand-drawn maps of complex locales one sees in antiquarian tourist papers! I know the Matadero pretty well, but an entire building was left off the abstracted map, so I had to wander back to the central reception in the blistering heat to ask “Where the fuck are the tents?”, which, needless to say, were not privileged locations on that day.
I arrived late, como siempre. The discussion in Spanish with various accents was mostly over my head, although I could recognize familiar themes repeated from the inaugural session. Fortunately for me much of the content of this meeting would be repeated later at the Reina Sofia museum on the occasion of the visit of Black Lives Matter activist and historian Keeanga-Yamahtta Taylor, which I will blog later.
There was talk about demonstrations and which groups participated. An African man spoke of capitalist resource extraction in Africa. This is a frequent line in talks by migrant spokespeople, which seems rather like a familiar song. What is less known today is the new varieties of “assistance” by the Chinese, and the US military expeditionary forces operating in relative obscurity.
From what I've seen of movement activism here, there hasn't been much done on foreign policy. Unlike the USA, the EU is not so directly fucking with other countries. But there also doesn't seem to be much attention given to what Spanish corporations are doing overseas, which can be rough.
Madrid has seen a recent growth in visibility of groups advocating for migrants and for an end to institutional racism. Groups like Afroconciencia, a group of “afro-descendant” people supported by the Matadero cultural ce nter, and the ally group SOS Racismo among others have emerged strongly, and are networking internationally. The neo-fascist reaction to the high flow of refugees and migrants has brought this struggle to the forefront.
This is exciting for me, since for my lifetime anti-racist struggle has been at the forefront of US left action. I have many ideas about it, and there is a lower bar to white participation in the movements in Europe than in the USA. (As Professor Taylor told us later, Black Lives Matter is black-organized, period.)
A woman from Barcelona (I think with BCN en comu itself) spoke of institutional racism in the Mossos (Catalonian state police), and other functionaries of the state. This is effective racism, she said, not just an attitude among the public. To confront this requires public education. Also migrants and diverse peoples must be put into public service.
Another person noted that in the state of Madrid (not the city, but “Comunidad de Madrid”, run by the right wing) there are 14,000 unresponded requests for asylum. There needs to be a concrete program of education, “talleres de sensibilizacion” for city workers. A wonan said she is trying now to organize exactly that, talleres de sensibilizacion in schools which have high percentages of migrants of certain groups.
A trans person of color spoke about the problems facing the community. Migrants without papers – sin papeles, sans papiers in France – cannot participate in most official centers, because “first they ask for your DNI [national identity card], which they don't have.” In Spain everywhere for everything you have to show and give your ID card number. With the recent change in the federal government after the no confidence motion unseated the right wing, sin papeles have been given access to public health services.
A guy from Cameroon spoke very well, since he had studied Spanish in his country. “People here in Spain couldn't imagine that.” He had only been in Spain six weeks, he said. “People can't imagine that Africans come to Europe for tourism.” He suggested forming mixed football teams to encourage anti-racist attitudes. “That's easy to do.”
With a low comprehension, my mind began to wander. Amidst this mixed crowd of people both white and of color, I ruminated on a recent favorite theme – a living museum of the cultures of African and American peoples. I realized the thought came probably from the FITUR - Feria Internacional de Turismo we attended last year, where countries mounted pavilions to display themselves and their attractions to entice curious Spanish tourists. We browsed the fascinating pavilion of Mali, and chatted with the people there.
Madrid, alone it seems among the capitols of major colonial powers, has no major museums of the colonized peoples of Africa, and only a remote and anemic one to represent the Americas. What this means in affective terms is that immigrants, migrants and refugees and their descendants in Spain are visible only as subjects of care, victims of racism, people in the end to feel sorry for and to try and help.
That's ridiculous. In NYC, and most major US cities, large general museums with ethnographic displays are crucial instruments – and were so conceived of by their founders – to educate the people about each other and their pasts. They confront with their “riches” racist attitudes that are reflexive, automatic, unconscious, institutional.
Even so, these collections were founded by imperialist white explorers and scientists who regarded the places and peoples they studied as exotic objects. Some of these museums have been the staging ground for teach-ins and demonstrations demanding that they focus more on the legacy of colonialism and the damage it has done. “Decolonize This Place” – it is not a new campaign. There is a depth of experience among these cultural activists which I hope to be able to connect with Spanish movements in the future.

Because of the anti-racism panel, I arrived 40 minutes late to Raúl Sánchez Cedillo's mesa on subaltern Europe. A woman was speaking as I entered, on a “general European problem,” that is the need for a process of “redemocratization,” a need to enlarge the practices invented here in Spain as an alternative to liberal democracy. That is a third way. It is not about winning the next election, it's about augmenting social movements.
Surprisingly she was speaking in English, as was nearly everyone else in this meeting, which offered simultaneous translation as well.
Her point was the same as the US DSA analyst I've been following, Ethan Young, made in a post on the the conflict between building movements – “organizing” they say in USA – and winning election campaigns. There are signs that the shock of Orcasio Cortez's win may reinvigorate DNC efforts to perform the former more assiduously. Labor unions as well have been jolted hard by the recent high court decision in favor of open shops. This cuts unions off at the knees. So they look to be at last waking up to the necessity or organizing.
We need to be aware of the ever-increasing racism which is more and more openly outspoken in everyday life, the speaker continued. Also fight against sexism. These are always already transnational practices. Our work has to be feminist. 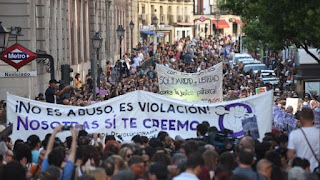 Raúl Sánchez Cedillo is a longtime member of the Fundación de los Comunes, co-organizer of the conference. He published a text framing the panel issues as part of a series posted by El Salto magazine online.
“The municipalist issue,” he wrote, “is fundamentally about the ways in which popular struggles and liberated social cooperation can invent new democratic institutions of counterpower, capable of imposing measures of social justice and lastingly defeating neoliberal 'extreme center' regimes, as well as the racist and fascist nationalisms” (auto-translation). “Extreme center” is a recent formulation that includes both traditional center right and left parties losing ground in recent EU elections because of their mutual support of EU austerity policies.
Gerald Raunig was also present. He is behind the transversal.at multi-lingual online 'zine, which for years, as the EIPCP (European Institute for Progressive Cultural Policies), has published many invaluable analytic texts. We are confronting dictatorships, he said, and “machinic capitalism”, i.e. the platform capitalism of Uber and AirBnB.
Isabel (?) continued: It is reductive to see municipalism only as winning elections. We need to transform the state apparatus and its institutions, not just take them over and be the nicer face of the state apparatus. There are instances, like Naples and Zagreb, but there is no strong national municipalist movement in the EU, only in Spain. But if we include movements like those against gentrification and against touristification – those are not the same – and right to the city – these movements are translocal.
The idea of “ecologies of care” has a feminist legacy. Preserve those which are existing in barrios. We also have to concentrate on checking the development of an obedient character, which has also developed in the last few years. The “fake news” incantations of the right – for the classical Nazis it was Lügenpresse, “lying press” used as a Schlagwort, a slogan or literally “striking word”) – has eroded trust in all media.

Issues All Over: But Housing Rules

An Italian man spoke on the subject of the commons. The protocols of Naples (which I will discuss in the blog post on the social center session), offers an opportunity to rethink this question. Democracy is based on ownership. You own a piece, you vote. To own without being present is in Roman law. The question is to reconceive ownership so that citizens have a voice and a role to play, and so that citizenship is only a proof that you are living in a place.

TO BE CONTINUED
Once they start talking in English, the report gets a lot longer!

Keeanga-Yamahtta Taylor «Un destello de libertad»
Her book talk posted by Katakrak publishers; her book was published in translation by Traficantes De Sueños
She speaks first in English, then there is a translation into Spanish -- 1:30 hours
https://soundcloud.com/katakrak54/keeanga

Ethan Young is the author of the recent pamphlet, "Mapping the Resistance: Insurgence and Polarization Between 2016 and 2020”, May 2018; ENG and GER at:
http://www.rosalux-nyc.org/mapping-the-resistance/