A CODA to the first post, “Acto Inaugural” – “Disenchantment” 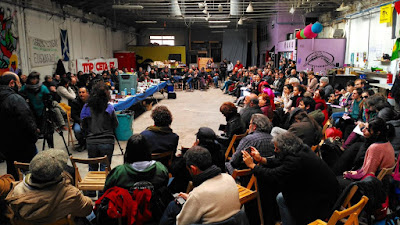 Meeting of members of Instituto DM at madridxmunicipalismo.info

I'm afraid this post is out of order, but as the first post was far from clear, it seems necessary to explain further what this MAC 4 meeting in Madrid on municipalism, self-government and counterpower was intended to be about.
In the first post on MAC 4, I referenced the disappointment many in Spain are feeling with the city governments they helped to put into power. In a pre-conference article posted to El Salto, Alberto Azcarate spelled it out, and I condense points from that below.
Note that these MACs are not meetings about municipalism per se, like academic conferences or meetings of elected officials and their governments' functionaries. The MAC meetings are intended to function as “an observatory and a critical monitoring platform” for the “change councils” to ensure that they comply with the mandates they received from the social movements that stood behind them from the beginning and voted them into power.
The new electeds were to serve as “promoters of counter-power organizations” in order to neutralize institutional inertia. In Madrid especially, after decades of right-wing government, the “administrative apparatus [is] strongly impregnated by the normative philosophy of that political current.”
Instead the city councils seem to have forgotten that they did not arrive to power as leaders, but as messengers to fulfill the mandates of the movements. They have succumbed to “institutional possibilism.”
The booklet – La crisis sigue. Elementos para un nuevo ciclo político/“The Crisis Continues” – published for the MAC 4 analyzes what the authors see as the close of a cycle of politics. “It is no longer about assessing the municipal experiences that were born in 2015,” they write, “but about starting to bet on those movements and struggles that can push beyond what has already been achieved.”
The next wave will again be driven by the movements, to “reconstruct the mobilizing base.” They look to the milestone of the the feminist strike of 8M, the national mobilization of pensioners, the “everlasting PAH – a collective star of movementism,” and the new movements for housing vs. gentri- and touristi-fication, the unions of precarious and domestic workers, and of sin papeles., among others.
The main areas of discussion at MAC 4 then were to be the emergence of a new militant feminism and its leadership “in the struggles against the general crisis of the reproduction of life”, the urban movements against the new real estate bubble – rising rents, gentrification and turistification of urban centers; the “new anti-fascism to confront the war against the poor”, and institutional racism. Also of course “the issue of political organization, in complex and fluid movement contexts, ranging from cooperativism to social centers.”
The movement groups which made such efforts to take Ahora Madrid and Manuela Carmena to the municipal government today feel cheated. Their issues have been forgotten. Now, as Ahora Madrid and Carmena look to “the middle strata of social democratic” voters in Madrid, “the sinuous drifts of institutional politics begin to promote a silent dispute over the integration of future candidates and candidates in electoral lists.” MxM: Madrid por el municipalismo convened the final assembly of the MAC 4 (which I did not attend), where these issues were addressed. 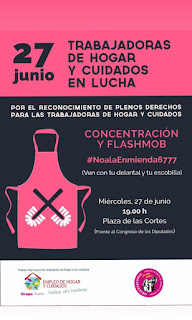