I promised to write “next” on “Technopolitics and Social Centers.” Those are the hardest parts to explain of all the Spanish-language conference events I have been attending lately.
They are also the least reported. 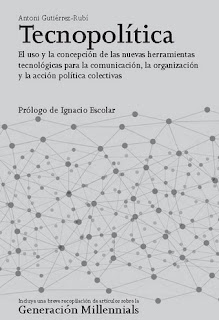 This time I'll tackle the technopolitics. This basically amounts to using the internet to build platforms – interactive websites – to change government, to make it more transparent, more responsive, more honest, and, finally, more truly democratic.
The chief hacker in charge of civic platforms in Taiwan, Audrey Tang offers a good English-language introduction in about 20 minutes. (All links in the text are below this blog post [saves the fingers]). S/he comes from the electorally successful Occupy movement in that country. There was no police violence in all of that, so nobody heard about it. “Media doesn't like that peaceful resolution stuff. So it moves on to the fighting,” Tang said. “Democracy is not just voting. Voting is just the entry level of the game.” S/he is working to “upgrade democracy in Taiwan,” building platforms of engaging citizens in bottom-up policy development, and a digital media channel to engage politicians directly.
Tang was here in Madrid in 2016 at the Collective Intelligence for Democracy conference at Medialab. That's going on again now, as I write. A convocation of vetted hackers are working on these platforms in the center of this city, across the plaza from the occupied social center La Ingobernable.
(Actually, La Ingob had their own “Hackmeeting 2017” at the same time as MAC3 in October. I've no idea what they were working on. But the local gang is up there in the occupied social center pretty much every night, burning the midnight oil on something...) The Madrid Medialab's bi-lingual Intelligencia Colectiva Para La Democracia conference is “two weeks of collaborative work, multidisciplinary teams around projects related to democracy, citizen participation and the tools and methodologies that facilitate these processes.”
It climaxes with public events – a series of talks by different luminares, including media theorist and ex-punk pirate radio guy Richard Barbrook, and the mayors of Madrid and Barcelona.
Honestly, this is really geek stuff. And, like most of what Medialab does, it's over my head. But the implications of all this development are indeed revolutionary. Even though most of it is till in beta (in development), it is being used all over Spain, and, clearly in Taiwan.
It's important to note that this isn't “smart city,” using digital technology to enable managers to manage more efficiently. It isn't internet entrepreneurship training. And it isn't about voting in elections. This is a total re-imagining of what it means to govern in democracies. 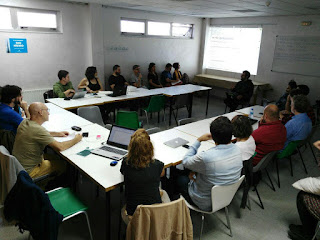 My closest exposure to all this was at the MAC3 conference in A Coruna, in the workshop on technopolitics. Several Spanish hackers presented their platforms and their features, which are all in operation in governments today. (In this account, I'll skip the usual moaning and groaning about my low level of Spanish and the social exclusion an old person feels in an event dominated by the young. I plunged on, and do continue despite all that. But it is still the grain of salt dear reader must hold in mind.)
The workshop leader introduced, saying that technopolitical work is “more transversal” than meetings and assemblies, which tend to attract people who are already activist.
It is the program of capital, he said, to conquer and privatize critical infrastructure, including online. Our capacity to organize depends upon these infrastructures. Added to this is control of our own digital identities. As well, the militarization of technology is underway. Drones, robots, and mass surveillance are only a part of it. Like food production, the web is controlled by five companies, Google (now a unit of Alphabet), Facebook, Amazon, Apple and Microsoft.
(E.g.: Video from the recent “Peoples' Disruption” meeting on platform cooperativism was posted by its host the New School to their Facebook page; only a week later it is already deeply buried in the endless stream of university publicity.)
Counterposed to this is the ideal of a transparent media, exemplified by WikiPedia. (There is also a 15Mpedia, which concentrates on the Spanish movements.) It is through this transparent media that we can do important things like monitor our physical environment, and transversally coordinate the municipalist movements.
A second speaker talked about how municipalist platforms have a different view of the “smart city,” a discourse that dominated architectural theory in the late '90s, and by now has become a major paradigm of urban policy, planning, and development. This is not going without criticism. Municipalists are introducing proposals in every city in which they are active.
Presentations then began. First up was Agora the platform of participation of Ganemos Jerez. (That's a city in the province of Cádiz in the autonomous community of Andalusia.) This is an online space of citizen participation. It includes voting and process, which could be an invitation to participate in a workshop. It also solicits agreement (or not) on political initiatives, like alliances of the Ganemos electoral platform with the political parties Podemos or PSOE (Socialists/liberals). He showed proposals from citizens which were active on the website, some 25-30. One proposal he liked was for a school of critical citizenship.
Privatized consumer electricity is a big issue. It accounts for many citizens' sub-proposals. (The necessity to “re-municipalize” public services privatized by right-wing city governments, and how to do that was a major theme in the MAC3 conference.)
Inter-city connections are needed to make a strong technopolitical group. The methodology of participation itself is political. In smaller cities there are fewer activists, and it is harder to launch and sustain a group. These folks especially need connections to larger operations.
A presenter gave an overview of the Decidim platform used by Barcelona en Comu, the city council of Barcelona headed by Ada Colau. (He promised to send me the link, but didn't; what I found through search is in the “Links” below.) Decidim – (which I have also read is based on Consul, developed in Madrid – ah, Catalonian pride!) – is developed and maintained by “a productive ecosystem” of hackers, citizens and others working as meta.decidim. At the moment of our briefing, Decidim had 27,000 participants, 12K proposals, 14K “processes,” 1.6K “results,” and 36 projects underway with the city.
Decidim is “a guarantee of democratic quality” as well as privacy and security for citizen participants. It is used by 12 cities now – Pamplona, one in France, and all the rest in Catalonia.
An open question is what role Decidim played in the recent independence bid. In any event, the whole mishegos has certainly obscured the positive developments in innovative governance in Catalonia. I have never seen any of this covered on Spanish television. (Unsurprising, that; dinosaurs don't like mammals.) 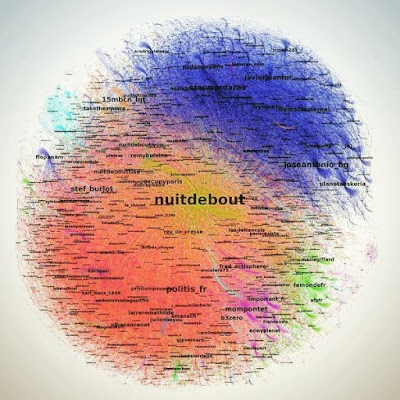 These guys (nearly all) are geeks, working for municipal governments in Spain. The big ideas come out at the conferences from the muck-a-mucks and little cheeses that give formal presentations. As I wrote above, I'm going to one of these in Madrid very soon. But in preparing this post I stumbled upon Heather Marsh speaking at the 2016 Medialab conference.
This “internet activist, programmer and philosopher” is trying to build “trust networks” within “network commons” to counteract the companies which are “are nothing more than gated wells of our personal data,” or “walled gardens.” She says, “Because of all this control of our data, and our minds and our actions and our relationships” we are all “being funnelled into this really ridiculous asinine infantile world where all we're getting out of Silicon Valley are dating apps, and Facebook and - who here is bored? There's other things that I'd rather be doing, like looking at our governance... and those applications aren't being built for us.”
At least not by capitalized private enterprise.
And in New York, the recently concluded third conference on Platform Cooperativism called "the People's Disruption” intends to bolster the challenge to the aforementioned “fearful five” platform monopolies.
There's a great deal more to be said about technopolitics, of course, and many folks working wholeheartedly on that. As the internet is gradually taken away from us, just as radio and television in their turn were privatized – (does anyone even remember the “equal time” provision on U.S. television anymore?) – it becomes increasingly necessary to defend what remains of its open nature.

Audrey Tang: Stories from the Future of Democracy
Tang is a high-powered Chinese hacker, and presently "Digital Minister" -- or a minister without portfolio, in Taiwan's government
https://www.youtube.com/watch?v=mxMxg4ct-D8
You can also see his 2 hour talk on “Digital Innovation in Public Service Transformation at Medialab-Prado”

There's hours and hours of videos from the 2016 conference on the subject, in both Spanish and English, which come up on this search:
"Medialab Intelligencia Colectiva Para La Democracia"

Re. Decidim, there are these two presentations on Slideshare, explaining "BCN DIGITAL/ Barcelona: Collaborative policies for the collaborative Economy," published in March '17 by Alvaro Porro (Barcelona Activa) i Mayo Fuster (IN3)
https://www.slideshare.net/Barcelona_cat/bcn-digital-barcelona-collaborative-policies-for-the-collaborative-economy
and this: "Discussions and decisions on Decidim Barcelona" from April '17 by Pablo Aragon
https://www.slideshare.net/elaragon/discussions-and-decisions-on-decidim-barcelona

The People’s Disruption: Platform Co-ops for Global Challenges
https://platform.coop/2017
Link for all video including breakouts
http://isoc-ny.org/p2/platform-coop-2017


Equal-time rule
https://en.wikipedia.org/wiki/Equal-time_rule
Geez!, could this still be law? I can't imagine that it is...