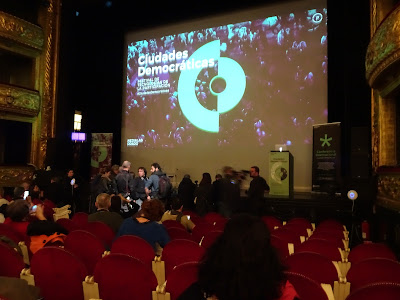 My last post, “Technopolitics: An Idiosyncratic Introduction” is not so bad as I re-read it. My head is expanding fast on this stuff. I've just finished the public events at the CID – “Collective Intelligence for Democracy”, The events I attended were just the tail end of more than a week of work by politicos and hackers in Madrid on democratic cities in concept and practice.
In a nutshell, this is the start of a democratic politics beyond representation – beyond congresses and parliaments, peopled by the “elect,” our best and brightest (or by now our most cleverly bought and best at being bogus). How do we do that? Through crowd-sourcing internet interfaces and artificial intelligence, for strong starters.
The ideology behind it is the commons.

A Short Philological Discursus on Ideology

Commons? What's that? Sorry for the philological digression here... but it's interesting. Google dictionary has one definition, and Wikipedia another. Let's start with the one I mean: "The commons is the cultural and natural resources accessible to all members of a society, including natural materials such as air, water, and a habitable earth. These resources are held in common, not owned privately." (They don't mention land itself, nor the emergent commons of information, but – take what we can get right now.)
For Google's new dictionary function, what pops up for “commons” is: "1. short for House of Commons. 2. land or resources belonging to or affecting the whole of a community.” Example: “the mismanagement of a commons." Perhaps dear reader can see the problem here?
Yes. It's control of information resources by a major capitalist corporation with vested ideological interests. Commons is not the English example of representative government – a system introduced to sublate direct democracy, agora or town meeting style, back into elite control.
Nor is it typically mismanaged, as the usage example has it. That's a fallacy of classical (i.e. capitalist) economics – we'd best call it a lie – that has been debunked by David Graeber.

The mayors of Madrid and Barcelona spoke together at “Collective Intelligence for Democracy”. The lush jewel box of the Teatro Español was jammed by media jostling with their cameras as Ada Colau and Manuela Carmena took the stage. They trooped out en masse as the event began. Corporate media does not care about the issues the mayors wanted to discuss.
Ada Colau was on Spanish TV that night being grilled about Catalonia, the current total obsession.
The following text is from notes on the simultaneous earphone translation to English.
Pablo Soto, Madrid's wheelchair-bound counselor for citizen participation, transparency and open government, intro'd the mayors as two people who embody new forms of leadership. Politicians change their views on citizen participation when they see its power, he said. But these are two mayors who have never changed their mind. They've been in on it from the beginning. 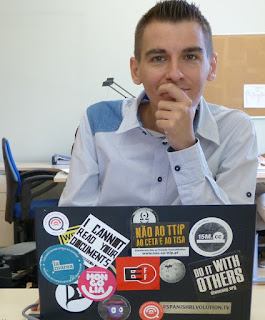 Pablo Soto
Manuela Carmena was exhortatory. “This new democracy is going to have extraordinarry importance. It's going to change everything. It's changing history. The core of the change is rooted in the cities.” They are looking more and more to the green aspect, to become sustainable and to be more linked to the countryside.
Ada Colau proclaimed her love for Madrid. Even as “the big governments quarrel among each other we in the cities love each other.” (She refers there to the Catalonian crisis and the federal police intervention and termination of local rule in that province.) Democracy was born in the cities in Athens. “Since it is a government of the people, the people must be the main actors. We've had lots of experience where the people are not really in power.”
“Democracy needs proximity or it doesn't work. In the city, the problems that affect you every day have to be managed. We are in the place of proximity where it is easier to have innovative participatory experiences.” Nation states and the European level of government are more remote, and closer to non-democratic powers like banks. So “we have this crisis of formal democracy.”
Powers far away govern our citizens from above. “If you don't love you don't care for democracy. It doesn't make sense.”

Pablo Soto: Many say the 20th century will be remembered as a century of terrible wars, and the nuclear bomb. But I see it as the century of democracy. “When it started you didn't have universal suffrage. Now it is the global standard,” with some exceptions. For the future, “the power of interconnected society will be the big advance of this century.” 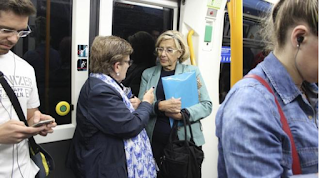 Manuela on the Madrid metro
Manuela Carmena: I think these participation processes are going to reform the structure of the institutions. Specifically they are reforming the world of law. I am really interested in crowd law. Today we have important tools to develop this collaborative law. “It's like a fruit born from participation.”
This points to the fact that most of the citizens feel better that they have a say about what is going to happen in the city. Through analyzing the responses of people on the city web page Decide Madrid, we can see that people “don't feel insecure anymore that they don't know the law.” (Mayor Carmena is a retired judge.)
Ada Colau: I'm excited about this being the century of women. {Big applause.] I was so happy to see those thousands of people on the streets against rape culture. [She refers to a notorious case of gang rape in San Fermin during the running of the bulls.] “We are equal before the law, but in the case of women we are living in a patriarchy, and that is still to be won. Feminism and democracy go hand in hand,” a feminism of the cities.
“Real democracy can only be bottom up.” This conference is about network democracy which is about horizontality. 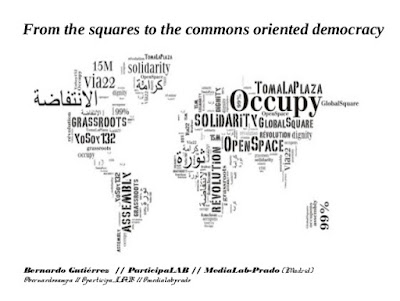 (At this point, a woman came along the aisle with her tiny child, and pointed to the two mayors onstage.)
Colau continued: We should not keep this difference between inside the institutions and the outside. They should be transparent. We publish our accounts, our mailboxes and the public agenda. These are changes that are here to stay when we leave government. Future governments won't dare to change them.
Ada Colau also remembers those who are, like me, digitally challenged. It is a challenge to “give power to the citizens from micro-processees in the neighborhood to the city level. We need hybrid forms to combine with the digital participation, because many people can't make it to interact digitally. There is inequalty of access. We have “lots of work to do to make our dreams true.”
Manuela Carmena continued: “The most important thing about the arrival of women into the public sphere is the arrival of women's culture.” If you wonder how we are going to improve integration, reduce inequality, all those “hows” – “women are practical. They ask, What can we do about that?”
Institutions must have porosity, and hence they must be transparent. As leaders we must be accountable, to say, We did this right, we did this wrong. “This new way of unerstanding democracy is going to erode many things.” Now there is no habit of being accountable. There is no evaluation of public policies. The media is not ready for those exercises in evalueation.
“When democracy becomes massive it has to change institutions forcefuly and necessarily,” she said. “We are heading into a fascinating world.” Technology is helping us a lot to lead in the 21st century to develop more empathy, and to amplify fundamental principles of humanity.

Pablo asked: Here, with our international collaborators, we are starting to generate a dfferent culture of democracy. How can we convince others that laws should be created by the citizenry?
Ada Colau: We are seeing a generalized crisis in Europe as institutions which are far away are obeying other mandates, not the people. You must say that globally there is a weakening of the 20th century forms that were a step forward like the United Nations, the European Union. Now there is a global crisis of governance. We are seeing a resurgence of the extreme right we did not think we'd see again. There are the seeds of terrible dangers.
But the time of crisis is a time of opportunity. The horizon is open – the future is unwritten. We are sure that we can give the leading role to citizens if the citizens believe it.
We have only the force of the people. We don't have the media. We don't have the banks. We have only the force of the people to enlarge democracy.
Participation is not just about opinion. It's also about co-responsibilization. We need maximum commitment to the commons, to the planet, to defend those. That's the only force we have. The force of the people is not simple. Its magic comes from responsibility.
History proves that hummanity evolves because of collaboration. That is how humanity has achieved further development. The far right has infiltrated its ideas of social darwinism, of the war of all against all. But that's not true. We reached this level because of optimism.
That was the inspiring part. 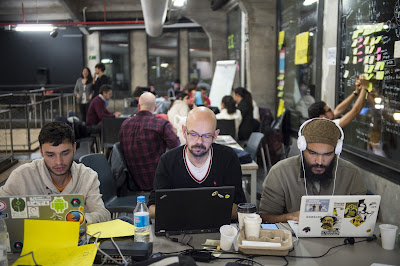 Medialab Prado workshop: collective intelligence for democracy (2016)
For this writer, the public events of the Democratic Cities conference in Madrid have been revelatory. The experience has layered onto my previous attendance at the TransEurope Festival, the MAC 3 conference of municipalists, and the “Fearless Cities” conference in Barcelona. A secret army of theoreticians, hackers, activists, and a new generation of elected politicians have been building this alternative world only in the last few years. It's the future of democracy and the machinery of municipalism. And soon, with luck and persistence, we will all go there – without a rocket ship.

The event includes CONSULCon'17 (that was specialist work on participation software), and Democratic Cities: International Conference and Collective Intelligence for Democracy,
http://democratic-cities.cc/

This pretty, short animation (3:46( uses water as the example of commons
https://www.youtube.com/watch?v=L7jaSjkd0jM

23 minutes of historian Peter Linebaugh explaining what "commons" is all about -- the Magna Carta. Weirdly, it's 1:33 minutes in:
https://www.youtube.com/watch?v=nSF3m_Uav6Y

And this just jumped up this week, as if on call from Mayor Carmena:
Crowd.Law
http://thegovlab.org/crowd-law/