“Squatting in Rome” is an engaging recent documentary focussed on some of the more public squats in Rome. (Thanks to Submedia for the tip on this.) The crew which made it is called MediAlien; they seem French, anarchist, and have bagged a few other works as well. Posted in November of 2015, the piece is dynamic and shortish (22 min.). 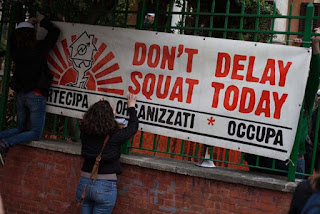 “Squatting in Rome” begins with the immense Forte Prenestino, with its hundred-plus person assemblies, and includes ESC with its close university connection (“We could say that we are Foucauldian”). It concludes with a ramble among the militant students and citizens who make these actions.
An elder speaks about the occupied Cinema Palazzo, with its famous cultural history. “They granted a permit to build a casino here. In what world do we live in?” Romans did not only say no, they took the building back. The Sapienza Clandestina collective -- "secret wisdom" – was formed by university students. They mapped out the institution, and realized there was a wealth of vacant space just waiting to be used by... them! “We're trying to remove spaces from the neoliberal process” that governs the university. The Communia squat followed the needs of its community. They opened a study room for students crowded out of the library, a language school and sewing studio used by immigrants. And the political parties? “They've had their chance” – now activists are doing it for themselves, and for what their communities want.
The motives for these actions, and their ethic come not from ideology but are constantly formed and reformed directly from the clearly defined needs of communities. Direct action that serves the people, a first principle of the Black Panthers.
This is not easy stuff. The cops in Rome are tough. They don't wear IDs, and they beat the kids freely. A few of those clubbed are interviewed after trying to rush the admission-only European Maker Faire held on their campus. In the twilight, after the demonstration, young men sing the joyful historic fight song of Italian communist partisans. The filmmakers insert a bit of “Bella Ciao!” (here's an English version by Chumbawumba). I've no idea why U.S. activists don't have fight songs.
While it is anchored to specific actions, the latter part of this doc is concerned with the broader political struggle. An older crowd of demonstrators hoist shirts and ties on hangers. The banks are overruling the governments (like “Government Sachs” in the U.S.), and the unions are prone, helpless in the face of the trend toward precarious “gig” work and the splintered economy of labor, the “entrepreneurship of onesself” (e.g., Uber).
The question of gender does not divide, but it is “transversal to all struggles.” Feminists are fully engaged, up front in explaining, and in the 'administration' of autonomous facilities.
Says one, “The time for struggle is always now. We have to catch the struggles in our lifetimes, because it's not true that they always lead to repression. They lead to a richer life with conscious people, and that's what counts.”

The riot-porn cover on the film link, beloved of the Submedians. Gee guys, that's not the only fun part of squatting! 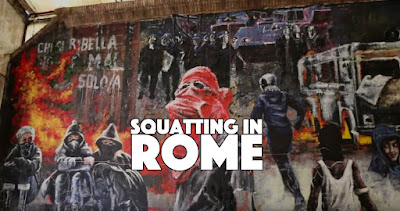