To Build Counterpower We Must Be Power

Which is very difficult. It is easier to be critical, resistant, to things as they are than it is to assume responsibility for the welfare of people, to manage infrastructure when there is no one to complain to. The Barcelona meeting of SqEK, however, this time included reports from self-managed factories and workplaces. And, at the same time the meeting was being held, Barcelona was going through an electoral campaign and election. The winner -- Ada Colau is elected mayor of Barcelona, the squatter leader of the PAH anti-eviction group.
So... change is in the wind, big change. Many left politicians in sympathy with the movement of the commons are coming into power. How is the squatter movement going to work with this new emergent restructuration of political power in Spain? 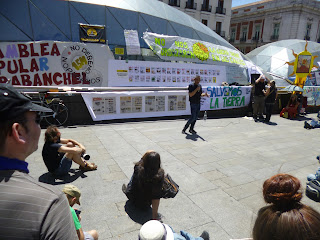 This was one of the very big questions hanging over our meeting... and it was evident in the absence of many otherwise interested Barcelonesans -- los barcelonense -- from our meeting. They were all out working for the Guanyem slate and Ada Colau.
I wish I could weigh in further on this question, and get into the content of sessions at the conference. But the action in the SqEK 2015 meeting for me revolved around an exhibition. We made a show of posters and zines from the squatter movement. I worked on this for weeks ahead of time. It was mounted in the vestibule of a theater for the opening reception at Ateneu Popular 9 Barris. This place, built mainly around a theater and circus training school, was once a squatted factory. Now it is fully legalized, and rebuilt as a comfotable facility in cooperation with the city government. Even though many now receive a salary to manage their place, the people of Ateneu 9 Barris, feel in sympathy with the social movement of squatting. They display a proud timeline detailing their activist period, when a stinky and poisonous factory was suddenly installed in a working class neighborhood. The neighbors were unhappy, and organized against it. Nothing happened with that, so, finally, they decided to occupy the factory and shut it down. For some years Ateneu Nou Barris ran as an occupied space.
SqEK people arrived there throughout the day, many bringing with them rolls of posters from their cities. Two Beehive collective people came from Mallorca and hung their banners -- "Mesoamerica Resiste" and their own Uter project, a dense allegorical drawing about the struggle for abortion rights. Carlos of the Sublevarte collective arrived from Mexico D.F., and put up the bright colorful silkscreen work of his group. Tobi and Andre both came from Berlin with their rolls, and Tina from Copenhagen brought work from Christiania and the Candy Factory. (Tobi has just brought out a new book on resistant street art in German, and digs this tough poli-street art website.) 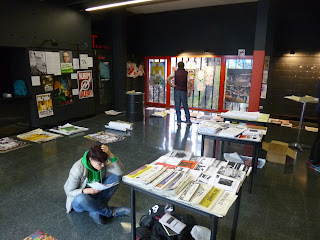 Alan Smart, the co-editor and co-designer of the epochal "Making Room" anthology, put up a dense assemblage of texts and images from that book, mixed with photos Frank and Vanessa brought from the NYC LES squatter movement. Galvao arrived with tons of the zine and book material he had been printing for us throughout the week, and we filled several tables with a cornucopia of resistant literature. With the arrival of the other SqEKers, we were ready for the first day reception of our meeting.
The show we put up was only there for a few hours. We had to clear it out because the Ateneu was having a big Balkan music festival the next day. Sigh... So everything was packed into the big rented van, and was trucked to the next place. That was the IGOP institute of governance studies of the Universidad Autonoma of Barcelona. There in the second sub-basement -- yes, we're talking way underground culture! -- we re-installed the posters and zines, which Galvao had printed tirelessly over the a week's time. This time we mixed in the expository posters which many of the academics presenting had brought with them. During breaks in the sessions, conferees gazed at all the visual material, discussed and browsed the zines.
At the conclusion of the sessions, we moved up the hill, to the famous squat of Can Masdeu. That is a former hospital for lepers squatted many years ago as a permaculture-based commune. By now energy was lagging. We did not reinstall the exhibition, but the Beehive put up their banners and talked about them to the Spanish who came to the special SqEK public event. Afterwards Carlo of the Sublevarte collective from DF and Tobi presented on their work -- about the Mexican autonomous movement and the subversive street art of Berlin respectively.
Finally, much of the exhibition materials were rolled up, packed in the van, and returned to Madrid in preparation for the trip to USA in September. If you are around New York City then, you can see much of it at the downtown cultural center ABC No Rio. That place, famous among punk music afficionados, was itself once squatted. Now it is scheduled for demolition and rebuilding as a green building. "Making Room" will be the last show before the building comes down....
Now we are sifting through the material gathered, and I am readying my trip to the UK for the first sessions discussing my new book, Occupation Culture: Art, Squatting and the City from Below, from Minor Compositions. I'll be speaking (and listening!) at the Cowley Club in Brighton June 24th, and as part of another "gathering" event for UK squat materials at the wonderful Mayday Rooms archival project in London on the 26th. 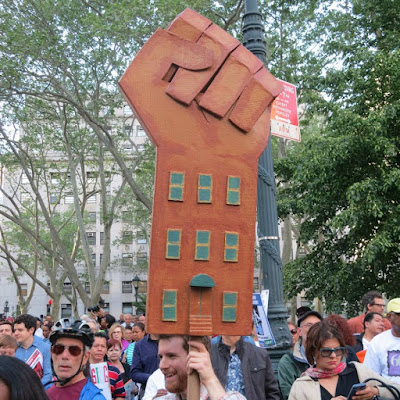 Bas-relief signboard for the recent NYC tenants' rights march, by Seth Tobocman. An exhibition of the movement continues through June 15 at Interference Archive, Brooklyn.