"Forget About That Squat"

I'm going to rant now, folks, so feel free to change the channel. I just watched a little interview with a guy who was billed as the "creator of Occupy Wall Street," (didn't notice that one, eh? Yes, your movement was "created") -- and read an article on "lessons from the Spanish movement" by a pimp for Elizabeth Warren. Both these folks seem to think that the lessons of Podemos and Syriza are that the left should move decisively into the electoral arena in the USA. Forget all this organizing stuff and putting people on the street and all.
Apparently these people had their eyes firmly closed during the many years of runup to these electoral victories. That would be the endless demonstrations, encampments, and pitched battles in Athens. And it would include the large networks of mutual aid that emerged all throughout the islands of that nation (which were imitated and perverted by the right wing there), which lay outside the purview of Syriza. So this beanbag for Warren suggests that Spain's movement was animated by a network of social centers which provided the space for people to organize. (They were getting arrested when they met in public space.) We could do that in USA, but y'kno the rent's so high and all... What this author neglects to mention -- part of a contingent who visited Spain, who went to the social centers in Barcelona during election time, and certainly knows better -- is that these spaces for organizing were squatted! Yes, I mean taken over by citizens who refused to pay rent to provide themselves with the political and cultural urban space they needed, and entered a legal process of contest for use of the property they occupied for purposes of commonsing.
This author also fails to mention the weekly mass demonstrations against cuts in social programs, and the back-turning on ministers by cultural luminaries because of cuts to culture, and (excuse me) the General Strike! The pitched battles with police by black-clad anarchists who could be seen on TV live from Burgos scampering merrily along in the background as angry elderly voiced their opinion of city hall to the cameras.
Direct Action Gets the Goods. It's an old anarchist slogan... and when you forget it, you can just turn to Tammany Hall, vote their way and look forward to your Christmas basket and maybe your cousin gets a job... while old man Plunkitt takes his opportunities upstairs. 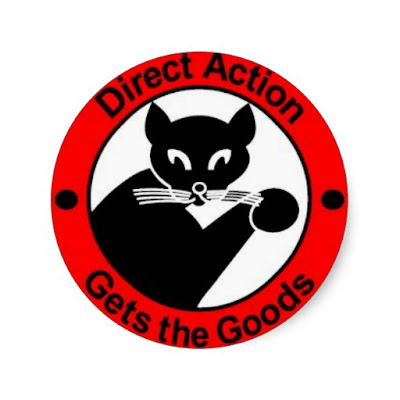 The Warren person's post was linked out of the website of a group of activists who visited Spain recently, during the exciting municipal elections. (It's at http://www.nyctospain.com/.) These guys presented at the Left Forum recently, where left activist strategies are debated, and decisions made which determine a lot of what is going to happen on the ground in U.S. cities, since the funding agencies which back these professional activists take their cues from these conversations.
I was communicating early on with an organizer of this visit. I suggested that they visit our conference at some point -- Squatting Europe Kollective -- which was happening at the same time. I certainly can't blame them for giving that a pass... But they did visit social centers. They did visit Can Batlló, a complex of factories that has been taken over by citizens' assemblies. The renovations are being assisted by the Barcelona city hall. Why? Because the citizens' assemblies told them they were going to squat the place if they didn't come to an agreement on its use.
I should not be surprised by this failure to include squatting in their report to North Americans. Even as I peruse the Chokwe Lumumba plan, the plan for grassroots economic redevelopment of Jackson, Mississippi devised by the Black Panthers' lawyer and derailed by his sudden death, which would have used city funds to develop the kinds of structures of citizen participation as Spain, I read Neil Gray's review of David Harvey's Rebel Cities book, in which the socialist is taken to task for ignoring the Italian Autonomist movement ("autonomistas," he remarked snarkily at a party I attended). Harvey gets it, as Gray quotes Blanqui, that "rent devours all." But his "aporia" on the Italian movement which generated the social center model for squatters across Europe (and his idealization of the Communist Party of Italy which repressed the Autonomists) extends to all the minoritarian movements, both political and cultural (punks), which made counter power and autonomous zones for the last 40 years. The fish of theory also rots from the head.
Let's see how this might be begun. Student movements have resisted street austerity cuts around the globe through pitched street battles -- and won. Only not in the USA. Schools are being closed all around that country. Fine. Take 'em. That's property paid for by your tax dollars, built for public interest. Commons it.
As long as these direct action strategies are not part of the calculus of U.S. activists, and especially the (often professional) people who presume to lead them, so long will the hopes and dreams of many continue to be unfulfilled, and energy and money circle endlessly around the electoral drain.

I refer to Micah White -- he is not responsible of course for a videotista's headlines, but he is an advocate of electoral stragegy now, and is convinced street protest doesn't work. Clearly I disagree...