The Legal “Good” and That Which Is Necessary 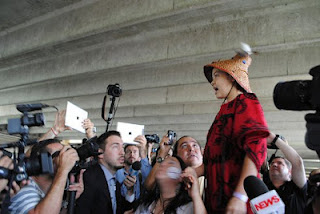 And Now It's Time for Your Questions
Now the BMW Guggenheim lab is in Berlin, “confronting comfort.” They are “focusing on citizen participation in the future of cities” from June 15 to July 29, offering “free programs designed to empower residents to change the city they live in.” They had planned to plop the Lab in Kreuzberg, along the River Spree. Kreuzberg in the former West Berlin was the epicenter of the squatting movement in the 1980s. Long slated for the massive redevelopment campaign of Mediaspree, this area is on the front lines of the struggle against gentrification in Berlin. The city has been bumping squats and alternative projects out of there one by one. So folks are steamed, and very well organized. The cops got the willies, citing “threats of violence by ultra-left groups.” (The favored weapons of the Mediaspree Versenken / Sink Mediaspree campaign at its height were paint bombs and water pistols, but never mind.) So the Lab was relocated to Prenzlauer Berg, the plush neighborhood of aparatchiks in the former East. Even there they are having trouble – with the police! 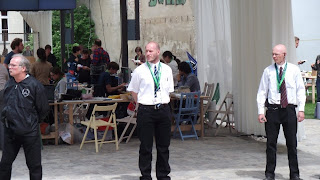 They are being over-protected. “If someone makes a presentation in the lab, I do not want visitors to feel they are surrounded by police,” said Maria Nicanor, the curator of the Lab. But they are. A competitive citizens' event for children was interfered with by police. Because that is more or less what the BMW Lab has been reduced to, holding events for children. (P'berg is full of breeding couples.) Which is kind of what the “Good”/BMW Lab collaboration is, finally, an invitation to submit your idea, to ask your question, to make your suggestions. They will judge them, and you might get some publicity, maybe even some kind of prize, like a chance at geekdom yourself.
This is a far cry from what political squatters have traditionally resisted for, and what their contemporary allies envision – a full-scale participatory planning process. “Good” won't do. “Good” is a cartoon for children. Although, just as all those talking animals make a lot of grown-ups into vegetarians, we may hope that our “Good” kids may wake up before we're all in free fall over that cliff. Time's Up. We can't just be “Good.” We must fight the evil, including the evil that results from doing nothing and refusing to look.
Although the times so often seem to demand it, I don't like to write cranky or canty. So let me add, as a kind of coda – the info about the resistance to the BMW Guggenheim Lab was sent to me by a member of the SqEK group who is following the action. His email subject line was “FUCK THE BMW LAB.” In Germany, as the website of the anti's makes clear, there are plenty of reasons to feel enmity towards that company for its past, its political role, etc.. In the USA they are simply known for making expensive cars which get exhibited in museums like the Guggenheim.
I have devoted my life to seeking and disseminating knowledge, so I have respect for the “laboratory” process that BMW Guggenheim Lab pretends to embody. But the way that SqEK is doing it is in the model of militant research, and we don't have any money. This is rather the opposite of the embedded institutional and corporate knowledge that the Lab seeks to produce and disseminate.
Corporate knowledge, even in its tutelary mode, does not advance according to a model of “criticism and self-criticism.” At best, it will answer your questions. (In some way; speak after you have spoken; or maybe say nothing.) It rests securely on its monetary foundations. Those talking are paid to talk. Those listening may pay to listen so that they in turn may become the ones paid to talk.
There is a great deal to be learned from the inhabitants of a city which you are seeking to redevelop. There is much of value in the institutions they have created, especially those that they have formed with great effort and solidarity in resistance. If you don't talk with them instead of at them you will never learn. When you are surrounded by the police, it is clear that the position of your investigation is corrupted. Then you are not a listening post but a sound truck. You present as a potential victim who must be protected from the discourse you wish to understand. The knowledge you gain will, of course, be shared with your protectors. So why should anyone talk to you? Talking to the police can only get you in trouble.
It isn't that the people running the BMW Guggenheim Lab are bad – they aren't. They come from an enlightened corporate sector. They mean well, and they are trying their best to do something meaningful amidst difficult circumstances. It is that at this very late stage in our planetary devolution they are still trying to make a business out of doing “Good.” It's certainly too late for that.