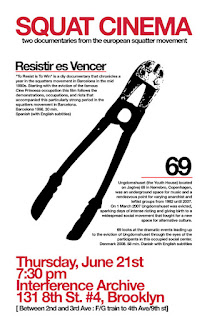 Squat Cinema June 21, Interference Archive -- Two Documentaries from the European Squatter Movement Thursday June 21st, 7:30pm Resistir es Vencer: "To Resist is To Win" is a diy documentary that chronicles a year in the squatters movement in Barcelona in the mid 1990s. Starting with the eviction of the famous Cine Princesa occupation this film follows the demonstrations, occupations, and riots that accompanied this particularly strong period in the squatters movement in Barcelona. Barcelona 1998. 30 min. Spanish with English subtitles
69: Ungdomshuset (literally “the Youth House”) was the popular name of the building formally named Folkets Hus (“House of the People”) located on Jagtvej 69 in Nørrebro, Copenhagen, which functioned as an underground scene venue for music and a rendezvous point for varying anarchist and leftist groups from 1982 until 2007. On 1 March 2007 Ungdomshuset was cleared of its occupants by the police at about 7:00 in the morning, sparking days of intense rioting and giving birth to a widespread social movement that fought for a new space for alternative culture.
“69″, directed and shot by first-time filmmaker Nikolaj Viborg, looks at the dramatic events leading up to the authorities clearing Ungdomshuset on 1 March 2007 and the conflict that ensued. The film won the New Nordic Voices award at Nordisk Panorama 2008. Denmark 2008. 58 min. Danish with English subtitles
Posted by Alan W. Moore at 3:46 AM