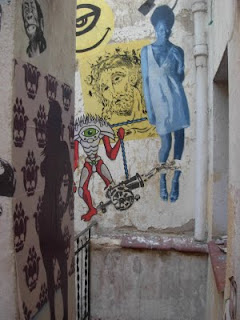 [NOTE: Hyperlinking is causing problems and delays in posting -- here they are indicated by asterisks, and put at the bottom.]
It is beautiful fall weather in New York City right now, and I am back in town and be back on the job. Right after a road trip vacation, I slammed into the weekend symposium with Franco “Bifo” Berardi organized by 16 Beaver Group. This was very heady, and ultimately rather depressing. Bifo considers the social center movement in Italy to be of the '90s, although he did note that a new one had just started, called Bartleby -- after Herman Melville's Wall Street clerk who "preferred not to."Some friends came soon after from Seco Centro Sociale in Madrid. Although there were five of them, they were a little shy, and we did not have a chance to do a public event with them. They brought an armload of books from Traficante des Suenos bookstore, and we sat down and had some beers. They had attended a 40th birthday party for the Young Lords Party in Harlem! (The Young Lords, as I note in the first post on this blog, were inspirational political occupation artists in NYC in the 1970s.) I hope in November I will have a chance to renew contact with Madrid, and go further on cooperation.Hamburg, where Michel Chevalier had the “House Magic” catalogue in his Autonopop store this summer, is sending us two artists to talk about their experiences in self-organizing. They are from the FRISE aka Künstlerhaus Hamburg, and they are doing an exchange project with Le Petit Versailles garden here. That project is run by Jack Waters and Peter Cramer, former directors of ABC No Rio. On October 5, Sabine Mohr and Torsten Bruch (both FRISE artists) will speak about artist organized projects and the development of artists’ self-organization in Hamburg at the Goethe-Institut Wyoming Building on East 3rd St. NYC on the 5th of October. Their project, installed from Oct. 2 – Oct. 12 at LPV garden focuses on the artistic exploration of the use and preservation of public space and public premises—particularly open green spaces in highly developed, urban environments.My German is slim, but their web links look pretty cool, and I’ll Google translate some of this stuff and study it. The Frappant group seems most directly concerned with architecture and urban space. They also run an internet radio station, and have started a new artists’ house occupation which they are blogging into My Space Comedy! An extended conversation/symposium with other European groups has been loaded onto YouTube as “Gaengeviertel versus Subvision” parts 1, 2 and 3.In book news, the Prestes Maia occupation in Sao Paulo (2002-07) is described in a text by Andre Mesquita in the Australian catalogue “There Goes the Neighborhood” (May 2008). That is the high rise occupation many in NYC have dreamed of, as they contemplate all those halted and vacant luxury co-op developments in formerly poor neighborhoods. Andre contacted me, but I have not been able to follow up to learn more about self-organization in Brazil. Virginia Villari, who wrote the text on ESC Atelier in the first issue of the HMBFC zine, has agreed to work on a second iteration of the “House Magic” project, which we have agreed to try to put together in May. Maybe this will be the “museum of the social centers” that one Canadian editor envisioned. At least our next phase of work will include the social center movement Latin America, long overdue for investigation. BTW -- let me know via email to awm13579 [at] gmail.com if you want me to send you a compressed "House Magic" zine #1. Next – a report on the visit of the artists from FRISE in Hamburg.
Bifo symposium
http://www.16beavergroup.org/monday/archives/002940.php
Seco
http://www.cs-seco.org/
Young Lords Party anniversary reunion
http://www.monthlyreview.org/mrzine/ylp220809.html
Frise
http://www.frise.de/
http://www.goethe.de/ins/us/ney/kue/en5032894v.htm
Le Petit Versailles garden
http://www.alliedproductions.org/cgi-bin/view.cgi?n=/lpv/home.xml
Frappant
http://www.frappant.org/
[see also projects on Radio --
http://www.fsk-hh.org/ ; Comedy -- http://www.myspace.com/vorwerkstift]
Prestes Maia background
http://en.wikipedia.org/wiki/Prestes_Maia
Posted by Alan W. Moore at 1:16 PM