Busy at Last in NYC 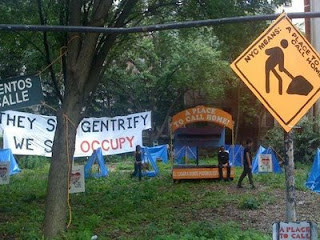 HOMELESS TENT CITY! One Hundred Homeless and Allies Grilling Food, Playing Music, Taking Back The Land at 115TH AND Madison Avenue in New York City. Call for all to come out and show your support. Bring food, hang out, share company...
At 11am EST, July 23 Picture The Homeless and allies installed a tent city in a vacant bank-owned lot at 115th and Madison Ave. 100 people are in the lot, enjoying corn, beans, bread, fruit, and music by the Welfare Poets. Police are on the scene, but everything's calm. We have a casita, a stage, barbeque grills, banners, signs, cardboard shovels and pick-axes, and tent structures!
As the foreclosure crisis festers, Bloomberg and the banks fail us. Across the street from the tent city is public housing, where families are doubled and tripled up. Over-crowded apartments, the shelter industrial complex, or sleep on the streets - we need better options. From Miami to Sacramento to now here in NYC homeless people aren't waiting around. Come show your support! 115th and Madison, we'll be here as long as we can. (They're bloggin' it; for Twitterers, it's pthny; and Facebook tiny.cc/pthonfacebook.)
Yes, that's the press release. And I've just left the lot. This is a great project, a long time planning, and they have generated a very friendly atmosphere. The set is by the Not An Alternative crew from Brooklyn, and it looks both festive and homey. Frank Morales is the lead organizer; an Episcopal priest and a long-time eloquent squatter, he is wearing his clerical collar. I found a little poison ivy in the lot, but we took it out pretty much before anyone got bit. Oh, and twenty plus cops and plainclothes are standing by in a line just outside the lot. I met up with the gang at Union Square Park and we headed uptown on the subway, trailed by police. Experienced activists chatted with the cops -- Ben of ACT-UP, and Chris of the Shadow newspaper. Legal observers in their green hats rode along with us, just as they did during the RNC 2004 protests. Most of this activist crew is young, however, and I'm happy to see it. When we got to East Harlem, we were split into groups. Our group, me and the Japanese writer and journalist Sabu, were followed by five cops. We went around in circles and finally hailed a black car. Where but in America can you ask a cab driver to take us somewhere because we're being followed by cops? He was like, "Okay, where to?" Some congeros showed up and beat drums, played guitar; one guy danced very nice. Then lunch was dished out, and everyone relaxed under the tall trees in the shady grove and chatted. I'm back at work on my writing here in the library -- hope it's gonna last up there! (BTW: "House Magic: Bureau of Foreign Correspondence" zine is ready to ship, and it looks real slick. It costs $8 to make and post in the USA.) Wow, only a couple hours, and the cops are massing. It looks like everyone still there is going to jail. It's raining in New York. At least they made the New York Times. This is one inventive group of creactivists.
Posted by Alan W. Moore at 10:50 AM