Tearing It All Down: The Twilight of the Citizen Participation Movement in Madrid 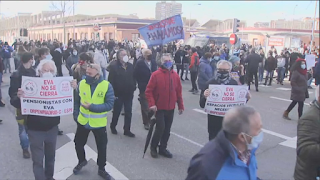 What’s Wrong Here?
It’s hard to explain these places because they don’t really have many counterparts in the USA. But they’re common in Europe, and there are many in Spain. The geneaology of citizen spaces is mixed. There’s the anarchist tradition, exemplified by the career of the education martyr Francisco Ferrer, of workers’ self-education. Some of the spaces have that tendency, most especially in Barcelona. Others are descendants of neighborhood organizations from the time of the dictator Franco. So you’d be forgiven for understanding their existence as part of a common civic good.
They are places of popular animation, where people can come together to do projects that they themselves decide are useful and interesting. They don’t need approval from bureaucrats or managers, they just need agreement among themselves.
They are the nodes of citizen participation, places where people can really feel a part of their neighborhood, not just a consumer.

Right wing politicians have never liked these places, no matter what form they take. Over the last few decades many of these citizen spaces have been set up and legalized. They were given contracts by the government in response to steady organized pressure from citizens’ groups.
Now the city administration has passed to the right wing hands again. This time the traditional PP is reinforced by coalition with a new hard right neo-fascist party called Vox, and they are determined to eliminate all of these spaces throughtout the city, not just the few okupas they fulminated against during the electoral campaign. Moreover they are disordering and disturbing the operation of the principle think tank and generating center of citizen participation, a funded agency called Medialab Prado. It’s being evicted from its purpose-built building in central Madrid.
Over several years, I watched the arising of spaces like these, and reported in this blog on the discourse of citizen activation across institutions and cultural agencies in Europe. Artists, architects, urbanists and activists were talking about strategies, holding conferences, generating reports and journal articles.
Put queries like “strategies to activate citizen participation”, “How can you encourage public participation?”, and “What is active citizen participation?” into a search engine and they’ll come up.

Get Back In Line, Buster

Why is the right wing so opposed to this plainly effective goal of good government?

The questions may seem tiresome since the answer seems so clear. Contemporary reactionary politicians, and in the case of Madrid the self-declared “center right”, have embraced the political strategy of polarization that worked so well for Trump. Spaces of citizen participation, where people of different points of view can meet, interact and decide things together can break the spell of polarized siloed political viewpoints. So that’s no good.
And of course people are doing things other than consuming, so that’s no good either.
To grant contracts of use to citizens for centers of self-organized initiatives means those places aren’t available to be sold to the highest bidder or simply given away to a political friend. Corruption is endemic to right wing politics in Spain, so that isn’t only conspiratorial supposition.
Last month the permitted legal neighborhood center EVA Arganzuela was evicted from its premises. (It's name, EVA, means Espacio Vecinal de Arganzuela, Neighborhood Space of the Arganzuela barrio.) I went there a number of times. I blogged about its formation, in a long campaign of demand for such a space carried out with the collaboration of the nearby cultural center Intermediae in the Matadero complex. Intermediae later paid for supporting that demand when the city cut their space in half. That kind of reprisal happens when a city agency steps over some invisible line drawn in the minds of the right wing. That’s what is happening now to Medialab Prado. The agency is paying for its past political sins.

Break It Up, Move Along

Medialab is Madrid's think-tank on citizen participation -- fablab, media center, and a place of international conferences. The director has been fired, the custom-built edifice in the center of Madrid is being cleared, and the staff moved to the periphery of the city. This is the crowning act on the on-going demolition of citizen participation infrastructure -- cultural centers, community gardens -- going on all over the city. As the right’s slogan for the May election campaign goes, "It's either communism or liberty." Citizens together apparently is communism. 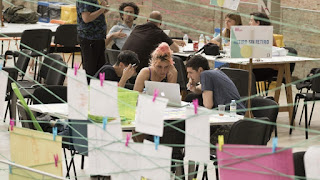 I did a project at EVA. I proposed they use some machines they had to make a zine. It was tough to get it going. I had to attend several assemblies, and argue with numerous people. Finally a young couple supported the idea, and it happened. What distiniguishes that experience from normal generation of cultural projects in Madrid is I didn’t have to know somebody in the administration in order to get it to happen. It wasn’t easy, but the door was open. That’s how it is in citizen-run spaces. The complaint that these kinds of places are just “run for a group of friends” and not “public” at all demonstrates a fundamental misunderstanding of cultural processes. The “public” cultural institution in Madrid is solely a site of spectation. You can only look. Not touch. Everything is arranged by professional cadres. No suggestions are invited.