The recent Europe-wide elections have turned up mixed results. In Madrid, there is gloom on the left, as the popular mayor looks to be out. She’ll not be able to form a governing coalition, and the right wing, despite their numerous corruption scandals, is back. But in other parts of the continent, the news is brighter for the left and municipalist movements. Marc Herbst’s report from Leipzig lays out how the deal went down there.

Ever since the international and regional implications of a potential far right victory in the recent EU elections revealed itself, you got a sense that the government in Germany and the state of Saxony where I’m writing from was put on notice. A large rainbow coalition of pro-EU parties organized a nationwide day of manifestations. The bogeyman right wing AfD (Alternative for Deutschland) party was nowhere to be seen. The Linke, SPD, Greens, DiEM and also Merkel’s CDU participated in the Leipzig event. It was a sizable albeit bland platform, punctuated by a surprisingly good pop/techno band playing from a stage on the plaza at the end of the march. From that stage, focused and partisan announcements on the need to get out and vote were made between bands. Speakers said that besides Berlin, Leipzig was the only other participating city in the former East. It was a lovely spring day. Though the turn-out was fine, it was not the huge “get-out the vote” rally it could have been. 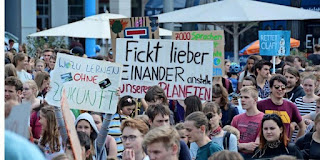 Over the last months, I've watched the further-left Linke party play with emerging movements and solidifying facts of the city and the wider European and global situation. Earlier this year, there was a sizeable energetic anti-gentrification march in Berlin. The march was built by networks of housing-rights movements who've marched for several years now. Last year’s turn-out should have been larger even if there were some fabulous pictures demonstrating links between the city's electric and queer-fab and cool party scene. With a strong policy initiative of returning large housing blocks to public ownership, including houses upon the symbolic Karl Marx Avenue that heads east from the center of Berlin, this year's turn-out was quite good. Rent prices have skyrocketed in both Berlin and Leipzig – both places with historically low rents.
A few weeks later, Leipzig had an anti-gentrification march with a good turn-out. The Linke was prominent in the march. Speakers during the rally referenced the sizable Berlin crowd and the policy initiatives coming out of the capital city. Later that month, in the immigrant and hipster ‘bad reputation’ neighborhood of Eisenbahnstrasse near the train station, the Linke prominently appeared during the rent party/street protest to support a local bar hit by a terrifying rent increase. I just came upon the protest- I was in the neighborhood printing at the public-access risograph club and was drawn to the event by its sound-system resting in a cart in the middle of the street. The cart had Linke party flags on it.
I’d been seeing the impact of Linke party branding at more official temporary, cultural initiatives. I work a few days a week in Grünau, another ‘troubled’ neighborhood, but one further away from the city center. Grünau was a model socialist neighborhood during the East German period. It was planned and built from scratch using the best socialist urban design. On the long pedestrian promenade at the core of the neighborhood, the Linke storefront is almost kitty-corner to the active indoor swimming pool and youth center, and just down the street from a series of politically oriented cultural spaces. Moreover, in the weekend before the election, I saw their party-cart everywhere in the hipster neighborhoods of the city- notably at the coolest outdoor party of the weekend; one taking place on the newly cool fields by the disused Plagwitz train station- at the cafe by the new-model community gardens and kid-friendly DIY playground.
Over the past few months, in the context of the ongoing issues of housing rights, immigration and lifestyle politics, it's been hard to miss the climate movements. Kids I know have begun to participate in the Fridays for Future climate strike emerging from Greta Thunberg’s resistance to attending school if there would be no future to learn for. The day of the March 15 Friday strike was cold and humid, but it only seemed to amplify the pre-teen and teenage energy of the event; directed at the climate but overplayed by the standard insurgencies of kids– sexuality, popularity, and unbound energy trying to seek an outlet. This march was large and ended with a mass of kids excitedly crowding out the city’s opera house steps, then joining those in the adjoining plaza in a punk rock pogo dance… interspersed with speeches for climate justice.

The last Fridays For Future before the EU election was larger. The UK initiated Climate Rebellion group was there. I attended their organizational meeting, mostly made of college students and academics. At that Climate Rebellion meeting we had to constantly interrupt the conversation to get more chairs, to introduce more people. That was stunning in itself. But the final pre-election Fridays for Future march was really something else. It was large and contained radical content.
A youth organizer I know excitedly led the chant, “hopp, hopp, hopp, Wachstum stopp.” This translates to the directly counter-capitalist chant, ‘hop, hop, hop, stop economic growth.’ She was leading this chant because she knew that as we entered the square, activists would be rappelling on ropes down the side of the local mall – the Höfe am Brühl. The climbers unfurled a banner with this slogan. When the climbers were eventually arrested, kids from the crowd began to yell the ultimate curse to any mall, “Höfe am Brühl is not cool!”
What concerns kids politically, and what realities confront them as problems in their tender years often goes on to dominate the politics of their later life. They have much more time than adults to brew in their anxiety and make the architecture of their potentiality. Kids have parents who see their anxiety. The kid organizer I know has parents whose family is established in the creative scenes of the city. It seems like a mistake, but a good one, that the Greens were able to capitalize on this current foment. It should be no surprise. While the far right took one of the greatest number of votes in many of Saxony’s electoral districts outside of Leipzig, it was the Greens and the Linke that won the city. While the right did well in Saxony, nation-wide, their vote sank and the Greens, buoyed surely by this energy, surged.
My friend and fellow researcher Michelle Teran dug up this bit from Germany’s Fridays for Future WhatsApp feed that counts coup. I’ve translated it from German to English.
“Hey People, we have been unbelievably rocking over the last 5 months, and we have done more for the climate movement than anyone has done before us. Something historic has just happened. All together, we have transformed the European Elections to the Climate Elections. After the vote, every party’s statement, except the AfD, said that protecting the climate was THE theme of the election. The media has also taken to use our concept of the ‘climate vote.’ Almost all the main candidates are speaking about protecting the climate. (signed) Franzi Wessel.”
In a way, it is heartbreaking that any party should benefit from the failure in governance that climate change represents. It is heartbreaking because the fear of disasters known and unknown are real, and terrifying. Yet, in the politics of a continent and a world, it is also notable and good that systems try to transform individual and common concern into good political developments. We should watch with guarded optimism how things develop.

Marc Herbst is artist, editor, researcher, some-times activist with a deep and inter-disciplinary approach across the ranges of art, art theory and social sciences and experience with natural sciences. He is a co-editor of the Journal of Aesthetics & Protest – www.joaap.org, an independent project publishing (in print and online) texts on art, culture and critical theory. He likes the name "weirdo think-tank" for the Journal Project. He completed his PhD at Goldsmiths Centre for Cultural Studies in October 2018. 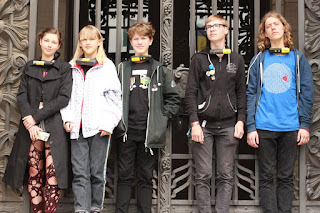