On the Tech Beat – Of Platforms and Contradictions

So summer is done and it's back to school before you know it. There's still a bunch to say about what happened in Madrid in July – and I promise to get back to it. But first, to the current course work.
I attended a talk last week at the Reina Sofia museum entitled “Overexploited and Underpaid,” part of a series called “Six Contradictions and the End of the Present” produced by the Grupo de Estudios Críticos.
The speakers were professors Trebor Scholz and Tiziana Terranova.
The framing of this appearance was announced on the museum's website:
“Though the Internet was initially considered a public space based on the free interaction among equals, it is now conceived as a huge factory without walls where any aspect of the day-to-day life can be valorised, produced and commoditised. Is there any alternative to this scenario?”
A study document was prepared by the GEC, which is quite extensive, concluding with the group's "Requirements for a transformative cooperativism". I did not see this. I just kind of came along to the seminar after the talk I blog below, and had no hesitation about barging into the conversation.
I had met Trebor 15 years ago at a conference in Buffalo, New York, called “Free Cooperation.” I was working then on artists' groups and collectives (I finally published Art Gangs in 2012), so all this stuff and these people interested me. Key conveners of that long-ago conference were Trebor Scholz, Brian Holmes, Geert Lovink, and Howard Rheingold, a Whole Earth catalog veteran and professional tech optimist.
“Free cooperation” named a conditon of labor promoted by Christoph Spehr. A book came out of that conference published by Autonomedia which emphasized the creative side of online action: “New media artists create social online tools and urge others to participate,” the promotion reads. “Knowledge collectives gather information in large, open repositories. Free culture – with all its file-sharing applications – is blossoming.”
At that point internet penetration was about 13% of everybody. Last year it passed 50% of everyone in the world. What has powered that is not free cooperation, nor indeed any kind of blossoming. It has been the raw power of capital. And, despite Google's pledge to “not be evil,” capital is not benign.
In 2016 I saw a barnstormer tour appearance by the authors of People Get Ready concerning the "jobless future" of AI (artificial intelligence) and super supple robots which turbo-capitalism can soon deliver. The implications for liberal democracy are bleak. The Atlantic magazine has been dinning this line for some time, most recently in a text by an Israeli author, who ought to know.
Or not. There's clear advantages everywhere for everybody in the platforms which capitalist internet firms have provided. This modern sword of Damocles hanging over our virtual banquet table is one of the “Six Contradictions” the seminar series at MNCARS set out to explore.
Scholz and Terranova both spoke in a formal lecture talk at the museum. I was immediately presented with a classic meat-world problem when a sniffling sneezing young woman sat down next to me, blocking me from the aisle. Foolish me, to take an inside seat. I really didn't want to get sick.
Terranova had the dystopian side of the argument, as she pointed out that the internet was developed with state funding. In the middle '90s it was opened to business and the market, and the slide towards monopoly concentration began. Investment poured in for all kinds of schemes. It stuttered with the “bubble” of '00, when many of the more hippie-minded projects popped, then came in again for real with the aim of disrupting all former businesses as usual. Ergo, shopping malls dying all over the USA today.
She began with an enormous obscure graphic – "Anatomy of an AI System [artificial intelligence] -- The Amazon Echo as an anatomical map of human labor, data and planetary resources." More than a map, this enormous graphic is accompanied online by an extensive illustrated essay. Terranova pointed out that the terms with which we think of capital and labor today must undergo deep change in the face of the rise of AI. 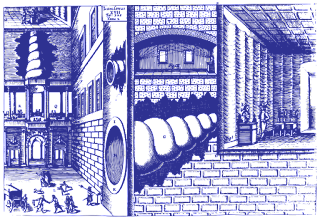 A 17th c. graphic from the "anatomy of AI" article; this illustration of "citafonia" from the Baroque era makes as much or more sense than the micro-rendering of the AI diagram itself....

All of this development is going to remain invisible to us, the users, “confined to the front end,” i.e., the user interface. These ways of interacting with “computational platform capital,” like Alexa and Siri [Alexa is Amazon's virtual assistant, like Siri from Apple's iPhone], raise the specter of a foreclosed dystopian future, like the TV series “Black Mirror.” (Which, BTW, I will not watch as I consider it the epistemological equivalent of the “strong guys with guns” genre of TV programs.)
Alexa starts laughing in the middle of the night, scaring its owners. Is a resistance embedded in the program?
All of this is profoundly disruptive to life as we have known and lived it, driven by the idea that information-based economic models can replace market systems. What maintains this hegemony in the sphere of public life is neoliberalism, an ideology, a Foucauldian “abstract machine” that subjectively holds the explicit structures together.
Trebor Scholz had the optimistic role, but he began it with a sober reminder. “People gave their lives” for the rights of workers over the past 200 years, and now capitalist “sharing” platforms are wiping those away. Discrimination among platform workers and vendors is resurgent as well.
As the evangelist of platform cooperativism, he drove straight to a few of the 45 cases from his book with Nathan Schneider, “Ours to Hack and to Own.” Among them is Up & Go Cleaners in NYC, one of a number of in-home services groups comprised of women of color and migrant laborers. There is here an alignment, a commonality with union organizing, as in the case of Las Kellys, and Territorio Domestico, workers' rights groups active in Spain among hotel cleaners and care workers.
Another is a Swiss co-op, MIDATA.coop which helps “citizens to securely store, manage and control access to their personal” health data. Very useful when talking to different doctors, and also to access clinical trials.
There is also FairBnB, a short-term rental platform which started in Italy and also works in Spain on a principle of “community-powered tourism,” returning a portion of profit to local projects.
These examples directly address current hot button issues – low-wage labor, exploitation and exclusion of migrants from labor markets, data privacy, and impact of Airbnb tourism on housing availability.
The idea is not new, Scholz said. Older co-ops, some quite powerful – e.g., Mondragon, True Value hardware – are “hiding in plain sight” as they have adapted to the corporate landscape, and do not look down at the seedlings around them.
The platform cooperative idea has a good deal of powerhouse academic support behind it. Multiple sessions of training are being held, and publications produced.
A questioner wondered if this was not cultural imperialism? The precondition of co-design, that the workers themselves be intimately involved in developing the platform, works against that.
Politically, said Terranova, the main task is to show that platform capitalism is doing a lot of collateral damage. Scholz said that in the USA they are looking to municipalities to support these initiatives. As per André Gorz it's a “reformist reform.”
People are struggling to survive, said Terranova. That's a strategy of power. They don't have time to organize. And (unsurprisingly) most of these platform capitalists are US companies.

NEXT: The seminar report

Six Contradictions and the End of the Present
http://www.museoreinasofia.es/en/activities/six-contradictions-and-end-present

study document prepared by the GEC for this meeting
http://www.gec-madrid.org/wp-content/uploads/2018/09/Notes-on-Terranova-Scholz-seminar.pdf

a text by an Israeli author – "Why Technology Favors Tyranny," by Yuval Noah Harari; extract from his book
https://www.theatlantic.com/magazine/archive/2018/10/yuval-noah-harari-technology-tyranny/568330/

shopping malls dying all over the USA
"Big, bold … and broken: is the US shopping mall in a fatal decline?", by Dominic Rushe. 23 Jul 2017
https://www.theguardian.com/us-news/2017/jul/22/mall-of-america-minnesota-retail-anniversary

"Anatomy of an AI System -- The Amazon Echo as an anatomical map of human labor, data and planetary resources."
More than a map, this
https://anatomyof.ai/ 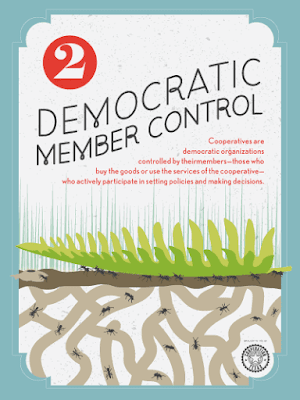 MIDATA.coop | my data - our health
https://www.midata.coop/
MIDATA's initial focus will be on health related data since these are most sensitive and valuable ... informed about future research and citizen science projects.