"A Tour" for the NYC Anarchist Book Fair 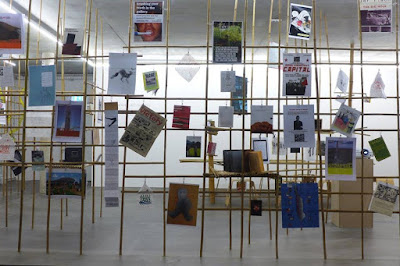 "Imaginary Archive" exhibition, produced by Gregory Sholette -- "A collection of documents about the past whose future never arrived"

This blogger will be talking at the NYC Anarchist Book Fair on April 16th, with an activist who worked with the Advisory Service for Squatters in London. I will read the text posted below. (Here you get also the links.) It's a little redundant, but... hoping for a lively discussion in New York.
Postscript: Well, that just happened today, and indeed it was a very lively discussion, which I hope to transcribe or digest for this blog sometime soon. I actually did not deliver this talk at all... But that doesn't matter, because here it is, written down. I hope to be able to develop another book from exactly this kind of content...

A Tour of Some Important Projects of Squatting in Europe
by Alan W. Moore
for the New York Anarchist Book Fair, April 2016

////////////// Much of this is taken from my book, Occupation Culture: Art & Squatting in the City from Below, 2015; PDF:
www.minorcompositions.info/?p=684
Although I have realized through talking about it that that book is not enough, and this is kind of a start on the next one...

ongoing problems of the museum
http://www.swissinfo.ch/eng/cabaret-voltaire_home-of-dada-up--for-sale--for-chf13m/41937932

Belgian squat of the village of Doel
http://www.theguardian.com/artanddesign/2014/jun/04/doel-ghost-town-belgium-street-art-decay

Where Can We Be? The Occupation of 123 Delancey Street, Stephen Zacks
https://placesjournal.org/article/where-can-we-be-123-delancey-street/